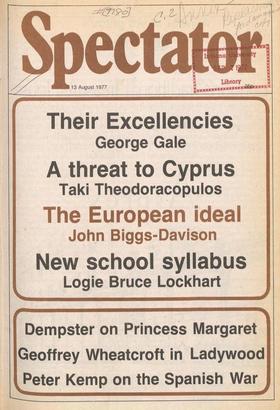 Putting the fit to work

During his election campaign, President Carter promised, if elected, to overhaul the entire American welfare system. At the beginning of this week he issued a set of proposals...

No relief in Ladywood Geoffrey Wheatcroft Not many people, I imagine, know that canvass and cannabis are etymologically cognate. Those who do would be hard put to think why it...

A senior diplomat I know was thrown out of the Foreign Office when she had a baby. She Was unmarried. Would the same have happened to a man? A reprimand, a career setback, even...

After the floods Auberon Waugh Quite a few of my readers, I dare say, are , old enought to remember the Lynmouth flood disaster of the 1950s. I think about thirteen people...

The threat to Cyprus

Taki Thedoracopulos The Cypriot Communist Party, AKEL, stands to benefit the most from the death of Archbishop Makarios last week. Having won as much as 40 per cent of the vote...

Geoffrey McDermott In 1958 was enjoying my job as Foreign Office Adviser to the Chief of the Secret Intelligence Service when the not very glad tidings reached me that I was to...

Charles Foley Los Angeles American has no equivalent of Mary Whitehouse to watch over its moral standards: here homosexuals must make do with the likes of Anita Bryant, a...

Richard West Every journalist visitor to West Germany ten or fifteen years ago wrote at least one serious article on the Gastarbeiter ('guest workers') who were pouring in at...

John Biggs-Davison The Leader of the Opposition proclaimed some months ago in Peking that the Western European countries must unitedly 'impress on Soviet leaders our...

George Gale My first encounter with an overseas representative of the United Kingdom was nasty, brutish and short. It took place at Gottingen University in the autumn of 1949....

Fun at the fair

James Hughes-Onslow 'Why is it', asked Country Life in their report on this year's Game Fair, 'that thousands of sportsmen (and sportswomen), people more used to the peace of...

Logie Bruce Lockhart As a very young headmaster, I was rebuked at a conference by the headmaster (not the present one) of what is usually called 'a Very Famous Public School in...

Are gilt-edged a snip? Nicholas Davenport Money may not be pouring into your pocket, dear reader, from your parsimonious place of work, but it is pouring into Britain from...

Inflationary forces Sir: George Gale (23 July) appears to believe that inflation can be eliminated if only the money supply is kept under strict control. I wish that I could...

Peninsular paradoxes Peter Kemp The Spanish Tragedy: The Chill War In P erspective Raymond Carr (Weidenfeld £10.00) Another book about the Spanish Civil War? But, the...

Faint thin line upon the shore

Alethea Hayter George Meredith: His Life and Lost Love David Williams (Hamish Hamilton £7.95) When James Barrie came to London in the 1880s, his first pilgrimage to a literary...

Nigel Dempster Margaret, Princess Without a Cause Willi Frischauer (Michael Joseph £4.25) The British are reputed to be third in the world league of per capita purchasers of...

Peter Ackroyd A Loving Eye Janice Elliott (Hodder and Stoughton £4.25) If you're going to write family 'sagas', or turn somebody's life into a mixture of sex and anguish, then...

Benny Green That Sunny Dome Donald Low (Dent e5.95) At a moment when more and more literary journalists seem to be straining after analogous relationships between Britain...

Rubens: the prodigal father Ursula Hoff All over Europe celebrations are held this year in honour of the 400th anniversary of the birth of Peter Paul Rubens; museums in...

Sexist Clancy Sigal Casanova (Prince Charles) .Fellini's Casanova (X certificate) lasts almost three hours and is as full of superfluous, expensive fat as one of the many...

Miscast Richard Ingrams 'Of all the accounts that have been written or spoken the falsest — the ones least related to the facts — are by people who affect to have no...

Thin ends Jeffrey Bernard The best meeting in the racing calendar takes place next week at York. Best for me anyway. Most people will rate Royal Ascot as tops but Northerners...

In an English garden Marika Hanbury Tenison It's been a funny year in the garden with few things going to plan, high winds blowing the blossom off fruit trees and vegetables,...

Darrell Bates In the course of taking up his appointment in 1847 as the first British consul in Abyssinia, John Plowden got permission from the Foreign Office to spend £400 on...