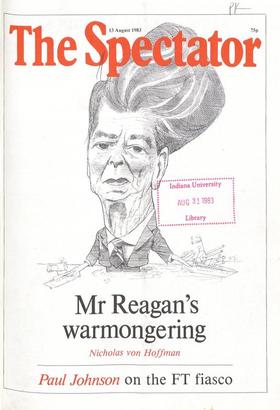 F ourteen years ago this week, British troops arrived in Northern Ireland. Their dispatch was the least that the British Government could have done, and their continued presence...

Local anaesthetics Charles Moore A ccording to Mr Alan Greengross, leader of the Conservative group on the Greater London Council, Conservative philosophy has always been...

hose finger was on Britain's thermo- nuclear trigger during Mrs Thatcher's stay in hospital? Anxious inquirers were told last week that Lord Whitelaw had this !natter in hand,...

Nicholas von Hoffman Washington T he President, the Congress and the Supreme Court have cleared out of town and won't be back until the second week in September. In times past...

Richard West F rance's reluctant decision to go to the aid of her former colony Chad, under attack from Libya, is a kind of recompense for the now forgotten occasion, in 1940,...

Mr Blake, MP, told a good story to some Irish fishermen with whom he made an appointment at Billingsgate Market on Tuesday morning, for the purpose of expounding to them some of...

Patrick Marnham T his week's military coup in Guatemala made front-page news in all three ex- pensive daily papers. The Times, in a report compiled partly from news agencies...

Timothy 1Garton Ash I magine sitting round a table with four apparently sane and civilised men, the senior of whom suddenly remarks, 'Of course the earth is flat.' You expect...

Sam White Paris president Mitterrand has recently been 1 dealt a cruel blow from an unexpected quarter: France's left-wing intellectuals, it would seem, have deserted him. The...

Bryan Rostron Mmabatho, Bophuthatswana C ir Richard Attenborough, despite the absurd mess he got into over the Johan- nesburg premiere of his film Gandhi, doubtless never...

In search of England

Roy Kerridge W here can the real England be found? My Quest for the Spirit of England began at Wantage, where in the year 849 Alfred the Great was born. From there I hoped to...

How to be a minority

b igby C. Anderson T om and Lydia have been trying to find out if they are a Minority. They are not °ne's traditional idea of the working class. T hey may be relatively poor...

The FT fiasco Paul Johnson T he Financial Times management may huff and puff but it is perfectly obvious that they have lost the battle with their machine-minders and the NGA;...

Colin Welch is unwell and will resume his column next

Sir Alfred Sir: On the eve of my departure for a journalist's visit to Central America, I am again subjected to Peregrine Worsthorne's jealousy-fed imagination (Notebook, 6...

Sir: The accuracy of Ronald W. Jones's observations in his article 'I was a Blackshirt menace' (6 August) are easily tested: he claims to have been a member of Sir Oswald...

Sir: 1 did not know that Mr Alfred Sherman is Jewish. Nor did I know, until reading Mr Peregrine Worsthorne's item about him in your issue of 6 August, that he is now tour- ing...

Sir: Because Peregrine Worsthorne writes deliberately to be provocative some

of his friends may respond to the incredible second paragraph in your Notebook (6 August) with the observation that 'it's just Perry'. It isn't. He has let himself down very...

What's Hecuba to us? John Stewart Collis The Letters of John Middleton Murry to Katherine Mansfield Edited by C. A. Hankin (Constable £9.95.) M iddleton Murry was the man who...

Elizabeth Jennings Stevie Smith: A Selection Edited by Hermione Lee (Faber £8.50, £3.50) r once met Stevie Smith on a dark, cold I in the King's Road. She looked like a small,...

Michael Hulse The Sacred Threshold: A Life of Rainer Maria Rilke J. F. Hendry (Carcanet New Press £9.95) W ith Eliot and Pound, Rilke is the most written-about poet of our...

Duncan Fallowell Pieces and Pontifications Norman Mailer (New English Library £9.95) A n interesting idea: to publish in one InLvolume Mailer sounding off in essays (his 12...

Rodney Milnes Don Giovanni (Montepulciano) A vague sense of guilt at not being in Bayreuth evaporated swiftly on reading the notices: how nice it will be to see Peter Hall's...

Moore, and more John McEwen T his may be the holiday season but gallery activity seems unabated. All too many shows are worthy of review; 30 July marked Henry Moore's 85th...

Tunnel vision Peter Ackroyd Runners ('15', Gate Notting Hill) A schoolgirl has vanished: we see her bike abandoned on the road. Her father prowls the corridors of her school,...

War graves Gavin Stamp Tohn Garfield is a consultant neuro- surgeon at Southampton Hospital. He is also a very good photographer — as good as any professional — and a...

Under a cloud Taki Athens A fter three of the happiest weeks of mY . life I'm back in Melina Mercoun country, or, as A.J. Liebling wrote of Loui - siana, among a people whose...

Enduring Richard Ingrams T was saddened to read that TV-am is 'now doing much better and is even clos- ing the gap with the BBC's Breakfast Time. For one heady moment earlier...

August P. J. Kavanagh I n order to escape too many reflections on Tamils and Sinhalese killing each other in Paris, as well as in Sri Lanka, and Arme- nians blowing up French...

Cuts Jeffrey Bernard T here's something about Islam that stinks. To sentence a man to 600 strokes of the cane for attempting to smug- gle a trifling 4,000 bottles of whisky to...

No. 1282: Robotic lament Set by Charles Seaton: It is reported that over a third of Russia's industrial robots are jobless and that those in work are un- popular with — and...

Report by Jaspistos: Competitors were ask- ed for a dialogue between one person trying to ask a simple question and another avoid- . ing the issue with circumlocutory jargon. A...

Smokescreen Raymond Keene D anger — Government Health Warn ing. Cigarettes can seriously damage Your health. This modern attempt by of- ficialdom to dissuade the populace from...

A prize of ten pounds will be awarded for the first correct solution opened on 30 August. Entries to: Crossword 620, The Spectator, 56 Doughty Street, London WC1N 2LL....

T he war in Chad showed signs of de- veloping into a wider conflict. The United States Sixth Fleet, including the air- craft carrier Eisenhower, sailed to the southern...