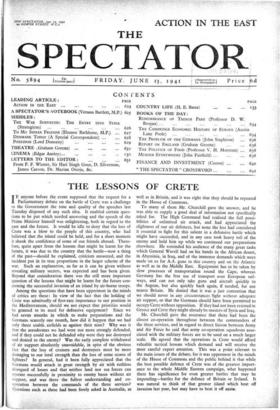 THE LESSONS OF CRETE

I F anyone before the event supposed that the request for a Parliamentary debate on the battle of Crete was a challenge to the Government the tone and quality of the speeches...

T HOUGH the part that Italy has taken in Axis successes can scarcely be apparent even to the members of the Chamber of Fasci and Corporations whom he addressed on Tuesday,...

The Ministry of Information has yet again been the target for criticisms, first at the Labour party conference, and then in a speech by Commander King-Hall. The latter, whatever...

Mr. Oliver Lyttelton cannot complain of the way in which Press and public have tried to put the best face on clothes- rationing. But no such scheme—necessarily kept secret and...

There are indications that Hitler may soon think it advisable to declare his plans for the new Europe which he aims at consolidating under the control of the Reich, but in the...

Following the passage of the Act which transferred fire brigades from the 1,400 local authorities to the State, the Home Secretary has set up at the centre a Fire Council (with...

Freedom for trade union action is one of the salient features of the democratic countries in contrast with the dictatorships ; and it may well seem amazing that trade unionists,...

The Prime Minister, naturally on the defensive, was less sensitive

to criticism and made a brilliant defence of Medi- terranean strategy. Without describing tactical operations in detail he made clear the many difficulties facing us in trying...

The debate on Civil Defence is still in progress and

the measure of the difficulties in debating this subject can be gauged from the fact that no fewer than four Ministers are taking part. The Government do not seem yet to...

The Bishop of London has obviously taken the right course in 'setting up a special commission to consider the future of the London churches. Lord Merriman is to preside ; the...

Our Parliamentary Correspondent writes : —It is generally agreed that a debate on Crete served a useful purpose. Mr. Lees-Smith put the questions which every man in the street...

Attention has been drawn, none too soon, to the very sub- stantial number of city children who remain in the cities, not because their parents refuse to let them go, but because...

A petiod of still more drastic paper-rationing dates from the beginning of this month, the reduction applied generally being to 25 per cent. of the average tonnage consumed...

ACTION. IN THE EAST

A WAVE of relief passed over the country when it was reported that British and Free French forces, strongly supported in the air, had crossed the frontier from Palestine into...

If that advance proceeds quickly Cyprus should be saved and

we should prevent the pincers the military experts tell us about from closing upon a battered and unhappy Egypt. But unless it proceeds very quickly indeed—in other words,...

That perennially young man, Sir William Beveridge, is to preside

over an inter-departmental committee to work out a scheme of social security for all after the war. These two developments are more useful, in the battle against Hitler's con-...

I wonder whether our troops, moving up the green valley

of the Jordan and past the Sea of Galilee, noticed a modern- looking restaurant on its shores. Nothing very conspicuous about it in that ancient country where there are now so...

Anthony Eden's House of Commons statement on the reform of

the diplomatic service is welcome, but terribly belated. The distinction between diplomats and consuls ceased to exist years ago in most other countries, with the result that...

The reforms, which Mr. Eden tried to institute during his

former period of office, should help these able and keen young men to retain their enthusiasm, since promotion will be much less dependent upon an ability to keep out of trouble...

T HE commentators so often tell us that we have reached a turning point that, to a detached observer, our progress would resemble the staggerings of a drunkard. But the Syrian...

We are, I think, fortunate that the first major test

of French recovery should come now and in Syria. General Catroux- a " five-star " general, which means that he is as exceptional as would be a similarly constellated brandy—and...

But I should not have selected as very beautiful the German steel helmet, which I dislike only less than the heavy jack-boots that on two occasions have filled me with...

The War Suiveyed THE ENTRY INTO SYRIA

By STRATEGICUS IF it had taken place under happier circumstances with what 1 lively interest would everyone have followed the advance into Syria. Here is one of the oldest...

TO MY INDIAN FRIENDS

By ELEANOR RATHBONE, M.P. T HOSE of us in this country who in former years did our best to aid the Indian people in their struggle towards self-government are now deeply...

By A SPECIAL CORRESPONDENT T HE best known of Danish authors has a story—a story which would certainly earn Lord Woolton's disap- probation—about some children who make the...

By LORD DUNSANY T HE sun was slanting towards the Peloponnese when I came to the temple of Poseidon. Its columns by the sheer edge of the land appeared to be absorbing the gold...

THE THEATRE Dostigaeff and the Others." By Maxim Gorki. At the Unity Theatre. THE curtain goes up on the Commercial Club in a Russian pro- vincial town ; the date is 1917, but...

Outside the Theatres WITH last week's films still deservedly accommodated in the theatres, the reviewer has an opportunity to look further afield and to forsake the splendours...

EDUCATING A FIFTH COLUMN SIR; It is generally recognised that the education of British youth is the most important task next to our direct war-effort. But while a great deal of...

SIR,—Your correspondent, Mr. Kennard Davis, proposes four prin- ciples of social conduct, which he considers should be the foundation upon which all Christian Civilisation ought...

SIR,—" Missing, Believed Killed " is a message sufficiently tragic to come to any wife whose husband is on active service, but to the Jewish wife its misfortune may be doubly...

SIR,—As you have thrown open your columns to the discussion of the Indian situation, and may not dismiss audio alteram partem, I wish to submit the following points for your...

SIR,—I shall esteem it a favour if you will allow me to reply, as briefly as possible, to your correspondent, Mr. G. W. R. Thomson. Will Mr. Thomson quote just one or two of the...

A QUES TION FOR CRITICS

SIR,—This short letter is prompted by a sentence in Herbert Read's criticism of W H. Auden's New Year Letter, which reads: " If a poet cannot experience poetry, he can at least...

SIR,—To give a full reply to all the questions raised by Dr. W. H. Dawson in your issue of May 3oth would require much more space than I could possibly hope for. There are,...

The campaign for digging up lawns is renewed. There never seems to be a corresponding campaign for paths. The general Edwardian lay-out seems to have been a path of three or...

Late Spring It is no secret now that the spring

has been bitter, backward and extremely treacherous. The frost of May 16th was almost, but not quite, as severe as the frost of exactly the same day in 1935, when 20 degrees was...

Ste,—Like your correspondent Mr. J. L. Hodson I also feel concerned by reports of the lack of materials in our factories at the time they are required and by absenteeism and...

Kent Front " We cannot understand," writes an American friend, "why you are still in Kent." From friends in other parts of England there continually comes the same expression of...

A QUESTION OF BRICKS

SIR,—Whatever else we may or may not want when this war is over, it is certain that we shall need every brick that is to be had. One would therefore think that every brickworks...

Herbage Seed Production To a recent note on ley-farming I

must now add a word on Sir George Stapledon's Herbage Seed Production (Welsh Plant- Breeding Station, is.), which is complementary to the same authority's bulletin on...

SIR,—May I comment briefly on the article "Crete Post-mortem " in last week's Spectator? In one breath Strategicus speaks of the solid bastion of Cyprus, in the next he asks...

A Pride of Scholars

The Cambridge Economic History of Europe. Edited by J. H. Clapham and Eileen Power. Vol. 1. The Agrarian Life of the Middle Ages. (Cambridge University Press. 3os.) NONE of the...

Time's Labour Lost REVIEWLNG Mr. Leon's book on Proust here, some months ago, I expressed doubts as to whether he was much read by the young of today. I was gratified to learn...

The Problem of the Germans

The Politics of Food. By George Darling. (Routledge. 58.) THE words muddle, mess and make-believe have often been applied to British policy, and. one rises from reading this...

AGATHA CHRISTIE .dOCS not disappoint her admirers in Evil Under the Sun; the puzzle is deftly mounted with the customary economy, and is then broken by Poirot with the precise...

By CUSTOS MARKETS were badly in need of a tonic, and the Syria move has provided it. For some weeks it has been plain that there was no lack of funds available for investment,...

Tna following is a summary of the statement of the chairman, Sir James Leigh-Wood, K.B.E., C.B., C.M.G., which has been circulated with the report and accounts for the past year...

PRESIDING at the thirty-third ordinary general meeting of Argentine Estates of Bovril Ltd., held on June 9th in London, Lord Luke (the chairman said that some companies nowadays...

THE annual general meeting of the Venezuelan Oil Concessions, Ltd., will be held at Shell-Mex House, London, on June 20th. The statement of the chairman (Sir Andrew Agnew,...

SOLUTION TO CROSSWORD No. 116