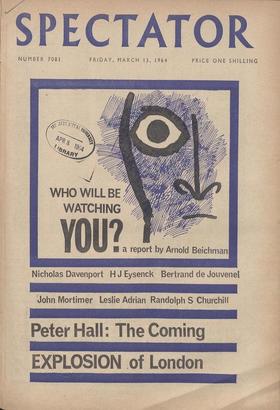 rT'HE case in the courts this week con- 1 cerned with the blacklisting of a barge owner is yet another reminder of the in- creasing frequency with which trade unions are...

—Portrait of the Week— 'YOU MUST EXPLAIN all those headlines',

the Prime Minister told Mr. Wilson in the Commons, before twice apologising for giving his own paraphrase of the Labour leader's misquoted remarks on the Royal UN Navy. But the...

By.HENRY FAIRLIE T N none of their speeches do Sir Alec Douglas- Home and Mr. Harold Wilson bother even to mention, far less to attack, the Liberals; from the press, it is hard...

The Strange Case of Mr. Brown By DAVID WATT There were, however, two passages of signifi- cance in the dreary proceedings. One was the speech of Sir Frank Markham, who in ten...

Shadow of a Change

OUR UN CORRESPONDENT writes : Any measurable change in the United States position on Communist China in a presidential election year is in effect unthinkable. Con- siderable...

KENNETH M ACK ENZIE writes: Next Tuesday, Randolph Vigne, a young South African journalist (who has written for the Spectator), is to appear in the magistrate's court at...

MICHAEL LLEWELLYN SMITH writes: There have been six Greek kings, and two were duds. The first, Prince Otto of Bavaria, who ascended the throne in 1832 at the age of seventeen,...

You ? Who Will Be Watching From ARNOLD BEICHMAN

NEW YORK The progress of science in furnishing the Government with means of espionage is not likely to stop with wire-tapping. Ways may some day be developed by which the...

From MURRAY KEMPTON PRINCESS ANNE, MARYLAND P RINCESS ANNE has the unhappiness of being the first _ American town so far this year which had to call out police dogs to...

The Future of the Aged

From BERTRAND DE JOUVENEL M EN have always desired a long life. This used to be an infrequent achievement; its becoming ever more frequent is a notable feature of our general...

Homage to 'DMT I liked the assessment of Dylan Marlais

Thomas in last week's cover story in the TLS 'a dedicated craftsman . . . a hard and honest worker. . . .' Indeed, this article serves in many ways as a rehabilitatibn of...

The suspension of 'the Philharmonia Orchestra for an indefinite period' is the heaviest blow to our musical life since the death of Beecham. Indeed, this splendid orchestra's...

For the disresp:ctful there is a certain un- seemly pleasure in the spectacle of the Arch- bishop of Canterbury engaged in strongly worded dispute with his predecessor, Lord...

first notebook. He has all the swashbuckling virtues of the Churchills- eloquence, loyalty, truculence, magnanimity, and above all courage. First, last, and always, courage. It...

The. Coming Explosion of London

By PETER HA LL EXT Thursday a massive government report will mark the end of an era. It will bury, for the foreseeable future and perhaps for all time, a myth which planners...

No one will be greatly surprized that Harold Wilson has not referred the Navy lark to the Press Council. Indeed, after what we now know of the background to the Daily Herald...

THE decision to move August Bank Holiday ex- perimentally in 1965 and 1966 is a commendable, but modest, attack upon a social problem which is bound to become steadily more...

By RANDOLPH S. CHURCHILL AT the end of last week the newspapers reported the elections to the Presi- dency of the Oxford and Mr. Lysaght is also well connected and has an...

SIR,—In your leader you quote the following state- ment of the Robbins Committee: 'The great strength of these Universities [Oxford and Cambridge] resides in large measure in...

R. A. Leigh, R. I. Moore A Future for the Cinema A. R. Wolfe The Riddle of Dallas Richard Gombrich and Martin Gilbert Blank Holidays Douglas W. Franklin A Spectator at...

Next week's issue of the Spectator will be an enlarged

SIR,—Of late we have been taught to regard the Spec-

tator as a repository of even politically inconvenient truth. It was, therefore, a shock to be told by. you that 'Of the many things peculiar to Oxford and Cam- bridge,...

A FUTURE FOR THE CINEMA

SIR, — Mr. Cameron's latest article comes very close to the basic problem of the cinema, namely lack of communication between film-makers and audience. Despite thirty years'...

A SPECTATOR AT CAMBRIDGE SIR,—May I be permitted a brief

comment on the introductory remarks of Mr. Lysaght's most realistic review of Cambridge? He stresses the apathetic and self-seeking nature of the students, and offers the dis-...

THE RIDDLE OF DALLAS

SIR.—We were surprised that the Spectator should give publicity to the article 'The Riddle of Dallas' Mr. Brienberg's selectivity among facts long avail- able to the public...

THE PSYCHE UNCHAINED Sut,—The hard core of fact in biographical

research is only found by going to the original source. Mr. Norman Kilgour has clearly only consulted the notes made eighty years ago for Sidney Colvin's biography of Keats, and...

1. You must buy cigarettes or a refrigerator through a retailer; hotels and transport organisa- tions will gladly sell to you direct, which is the real answer to those with...

SIR,—Mr. Moraes writes as if sex in Oxford were something

new, and as if its practice were confined to men's colleges only. Between 1926 and 1929 I spent a number of happy nights in St. Hugh's College, walking in the front door and...

gests that I gave an inaccurate impression of the Opus Dei in my article on Spain. Naturally I accept his denial that his association 'is limited to the professional classes.'...

By CHARLES REID Tile recent London con- , certs of Pierre Boulez, especially the one at which we heard his cantata Le Soleil des Eaux, are likely to prove as much a part of the...

By ISABEL QUIGLY cate.) // Mare is an easy film to sneer at, it's so much like the popular notion of a highbrow film, a rarefied essay in eine- , matic affectation, a film...

Nevertheless, this lone wolf of German ex- pressionism engrosses one as surely as he himself was drawn to grotesque masks and Swiss mountains assuming human semblance at the...

Classic Prospects for the Flat

By 0 ' D . THE European classic races this year will lose nothing in financial comparison with the mammoth US prizes, and the top three- year-old colt should be able to earn...

Script Without End By JOHN MORTIMER nN a foggy March morning, in the basement VI of a house scheduled for demolition, the Writer sits confronting a virgin bit of paper headed...

A Wolf by the Ears The Royal Malady. By Charles

Chenevix Trench. (Longmans, 30s.) RICHES and prestige were not enough for Thomas Howard, England's premier duke and the greatest of the Elizabethan magnates. Cecil and Dudley....

See the rose die, Its heart shrivelled, its petals sallow; Salute as the Snow Queen rides by. Count yourself lucky she does not love you. No one can love the Snow Queen. Her...

Collected Poems. By Edwin Muir. (Faber, 25s.) SOME poets (I think of Charles Williams as Well as Edwin Muir) have the misfortune to be truly good people: gangs of more normal...

Operation Barbarossa. By Ronald Seth. (Blond, 25s.) ALTHOUGH the outcome of the war was decided on the Eastern Front, as a sector it remains the most underwritten of all. There...

PATRICIA HIGHSMITH'S The Two Faces of Janu- ary (Heinemann, 21s.) reasserts her mastery of suspense writing and her ability to create plausible, shocking deaths. An uncanny...

I HAVE not, before this book, read a volume of short stories by H. E. Bates. I've seen one or two, in anthologies, that did not impress me. But one forgot those—after all, Bates...

IT takes an effort to recall the passions evoked at the time by the Rosenbergs' trial and execu- tion. Only a few years later, when two of the Rosenbergs' erstwhile accomplices...

By H. J. EYSENCK rir HE most readable and to the layman the most interesting of these four books is Fringe Medicine* which apparently owed its inception to an article by...

THE morality of profit is questioned in An Edge of Pride: by what ethical right does a man charge more for something than the total it cost him? Deane Narayn sets his first...

By CUSTOS E QUITIES are holding firm and no one seems to be worried by the extra load which Mr. Maudling—or Mr. Wilson—threatens to• put on indirect and direct taxation...

By NICHOLAS DAVENPORT THERE is !laic doubt that one of the reasons for our slow economic growth in the past has been the poor quality of our industrial investment. By this I...

By LOTHBURY A SQUITH MACHINE TOOL has tended to turn to special machine tools, which have proved rather unprofitable. It has, like others, suffered from the down-turn in the...

By ALAN BRIEN THERE are two things people always say when they learn that I. write a weekly column. The first is-----'how on earth do you manage to keep it up?' Under the...

Drugs On The Market By LESLIE ADRIAN Voltaire's jibe that doctors pour drugs about Which they know very little into patients about whom they know even less, has as much sting...