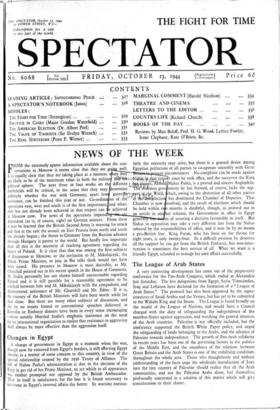 • 1 en t ey definitely whether the war with Germany, apart fro resistance, can be finished this year or not. Co-ordina operations east, west and south is of the first...

A change of government in Egypt at a moment when the war, though now far removed from Egypt's borders, is still affecting Egypt closely, is a matter of some concern to this...

The League of Arab States

A very interesting development has come out of the preparatory conference for the Pan-Arab Congress, which ended at Alexandria last Saturday. The five delegations from Egypt,...

Towards the Liberation of Greece

It is doubtful if any event in the war depressed the people of this country more than the downfall of Greece after her heroic resistance against both Italians and Germans. It...

Both Liberals and Labour, announcing decisions already in- evitable, intend to contest the next general election as independent parties. It may be taken as certain that the...

Another obstacle in the Planning Bill had to be surmounted on Saturday, when the question arose of providing for the housing of population outside the area of a planning...

Education in the Army

The Army Buwau of Curr‘nt Affairs has issued an admirable pamphlet entitled " Brush-up for Civvy Street," dealing with Army Education in the interim period between the cessation...

Last Friday it seemed that the House of Commons was about to embark on a stormy debate on Clause 45 of the Town and Country Planning Bill, dealing with the question of...

T HE conversations at Moscow have come just when they were needed, for urgent questions both of war and of peace call for settlement. Since Mr. Roosevelt and Marshal Stalin find...

Occasional observations on Ministerial English are not inappro- priate. In

the House of Commons on Monday, Mr. W. S. Morrison informed the House that the Minister of Health, after discussing with various experts the question of local boundaries "told...

A communication which has reached me from an Army officer

serving in India contains some disconcerting passages—the more dis- concerting in that enquiry shows that they are not baseless: " The most amazing thing about India," he...

A SPECTATOR'S NOTEBOOK T HE view that Lord Swinton ia as

good a choice as could have been made for the post of Minister of Civil Aviation is confirmed by the fact that no one, so far as I have seen, has put forward any better...

It is not, I think, too much to say that

the death of Mr. Wendell Willkie represents an international as well as a national loss. For Mr. Willkie, adjusting himself, with a quick, competent and essentially sincere...

that it is well worth while takinm note of this week's centenary of his birth. He may be little read today, but he had an immense circle of readers among intellectuals forty or...

The new International Organisation, like the old, will owe some-

thing to Calvinism, even , if it is not domiciled in Calvin's city. It was in recollection of his Scottish forebears- that President Wilson urged that the organisation created...

THE FIGHT FOR TIME

By STRATEGICUS T IME is an important factor in all military operations. Today it has become a vital factor. The Germans make no secret of the fact ; and it is more than a...

By GORDON WATERF1ELD T HE conflict between the Palace and the Wafd at Cairo has once more come to a head. When the weather grows hot in the spring and summer there will be the...

THE VALUE OF TOURISTS

By SIR EVELYN WRENCH T HE problem of balancing the Budget will be of supreme importance after the war. The Travel Association of Great Britain has made a most valuable...

By PETER F. WIENER N October z5th, 1844, Friedrich Nietzsche was born. Although he suffered severely all his life, although he went—like Hoelderlin—hopelessly insane white...

After the failure of our jumping competition, on the afternoon

of that blue and windless day, I was invited to distract and soothe the Hellenic Travellers by lecturing to them upon the sites of historical or literary interest upon which we...

the hills lies the site of Calydon, famous because of Atalanta." They strained their aching necks to look northwards, these hapless Hellenic Travellers to whom travel had...

By HAROLD NICOLSON Y sympathy goes out to the B.B.C. announcers whose duty it lrl is, day by day and night by night, to read aloud, in the hearing of some fifteen million...

I have twice visited Patras and was pleased when I

heard its awkward little name creep into the news bulletins. The first time I lay awake all night being devoured by vermin ; the second time I was ship-wrecked. On rounding Cape...

The difficulty raised by this Achaean harbour is one, not

of vowels only, but also of tonic accent. Those who favour the Romaic mode and place the accent on the first syllable, are faced with the subsequent decision whether to...

THE BUZZARD ON motionless, majestic wings,

A crucifix against the sky, He soars above all earthbound things And mews his far, complaining cry. In tireless mastery of flight He wheels above his distant lair Or spirals...

°Jenny Jones." At the London Hippodrome.--.. Happy and Glorious." At the Palladium. . WE all know the fate which befalls authors whose novels or stories are" adapted " as...

" The Mask of Dimitrios." At Warners.—" Address Unknown." At the Tivoli. —" Children of the City." For Non-Theatrical Release. New French Films. For Future Release. The Mask of...

POLAND AND RUSSIA SIR,—From the beginning of the Russo-Polish trouble until now The Spectator, almost alone among our weeklies of any standing, has not been afraid to pint out...

Stn,—Your readers know that I did not consider attempts to find a formula of agreement between Congress and Muslim League " damnable check of outsiders," but only the course...

Sta,—There is deep significance in your comment on the Gandhi-Jinnah

talks that " it may be questioned whether the basis for an agreement ever existed." A Muslim-Hindu understanding on the basis of Pakistan and Hindustan, or separate religious...

Sin,—General good wishes will accompany Lord de la Warr on his mission to negotiate a new agreement with the Emperor of Ethiopia. The 1942 agreement was only a temporary...

SIR, —May I suggest that Lord Cecil in his letter to you under this heading somewhat misses the main point when he advocates punish- ment after trial—open trial—of the Nazi...

Sia,—There is a method of putting an end to the Parliamentary scandal mentioned in Mr. Bernard . Shaw's letter to you in The Spectator of September 29th. During my 18 years m...

Snt,—I share Dr. Terry Thomas's misgivings about the Fleming Report. It divides the membership of the G.B.A. into the sheep and the goats. The independent schools fare quite...

Sin,—Sir Henry Slesser's article entitled " Side-Tracking the Law," which appeared in your last issue, makes one wonder whether the present Parliamentary procedure is...

MY Kentish village happens to have been one which, during th e u years of threatened invasion, was classified by the military author: , as "a nodal point." And the chief...

Ste,—The uninitiated reader must have found it difficult to detect the true motive behind the essay in vilification which you permitted to appear in the issue of September 29th....

Something new in pests this week. I noticed a few

days ago an oily stain on a lower lawn, and thought it was caused by droppings from the mower. But today it was twice the size, and on being examined, proved to be a mass of...

It is not an easy matter to get to know countrymen. Their, labour in the fields and small workshops keeps them dispersed and solitary, and this work-habit colours their mental...

But no invaders came by land or air. Have we then, felt disgruntled, and damned the time as wasted on that training in signals, intelligence, mapping, and arms? I don't think...

Sta,—I am engaged in preparing a book about my husband John Buchan, Lord Tweedsmuir, with the help of Dr. G. M. Trevelyan. I should be greatly obliged if any of my husband's...

I think it is usually a knowledge of things present; things he sees, hears, smells; sensuous con- tacts that affect his daily life. History is a shadow to him. I have been out...

Sut,—The writer on " Country Life " in your issue of October 6th, who contrasts with the Midlands the " almost subtropical" climate of Kent, where he has gathered " ten green...

The Soldier Woodman I got to know one oldish woodman

quite well. He was a glassy-eyed soldier and his spats never met the ends of his trousers. One day he approached me rather sheepishly, and spoke over his shoulder as though...

The Thrill of Tradition. By James Moffatt. (S.C.M. Press. 7s. 6d.) RECENTLY the world of theological scholarship has been impoverished by the death of several distinguished...

More Story Than History U.S.S.R.: The Story of Soviet Russia. By Walter Duranty. (Hamish Hamilton. 15s.) THERE was never a time when the British people had greater need to...

ONE of the truly 'puzzling things about planners of housing is their continuing aberration that density of poptilation should be greater in the heart of a town than on its...

Things Past. By Michael Sadleir. (Constable. 10S.) MR. SADLEIR is a painstaking and enthusiastic explorer of literary bypaths. The further from the highway, the more tangled the...

Towards a Plan for Oxford City. By Laurence Dale. (Faber. 6s.) AT first reading the central proposal of this book will probably strike the Oxonian as utter blasphemy. Even on...

HERE, by two writers who really know their job, are a couple of deft and well-made novels which will probably give pleasure and relaxation of mind to thousands of readers. Each...

SOLUTION TO CROSSWORD No. 290

guinea will be awarded to the sender of the first correct soilai,n of this week's crossword to be opened after noon on Tuesday week, Clout er 24th. Envelopes should be received...

By CUSTOS IT is apparent from the present state of tharkets that investors are badly in need of a fresh lead. When most brokers are reporting that business is down to a half or...

Morning Songs and other Poems. By Eiluned Lewis. (Macmillan. 4s.)

Miss EILUNED LEWIS, author of Dew on the Grass and The Captain's Wife, has now published a book of poems. In the first half of the bo ok are songs of a young mother to her child...

Paidela, the Ideals of Greek Culture. By Werner Jaeger. VoLII.

Translated by Gilbert Higher. (Blackwell. 223. 6d.) THE first volume of this important book was reviewed in these columns on June 16th, 1939. In this second volume Professor...

THE Senior Burgess of Oxford University, Petty Officer Herbert, shows that he is in no danger of losing the common touch when he. dedicates his verses to the Mrs. Mores of the...