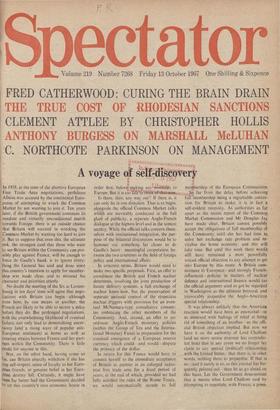 A voyage 4161 f7ti ke rrerr In 1958, at the time of the abortive European 'Free Trade Area negotiations. perfidious Albion was accused by the continental Euro- peans of...

To judge from the hysterical reaction from the fanatical adherents of 100 per cent com- prehensive education, it might appear as if the Tory-controlled Inner Lobdon Education...

Lord Chalfont told an Italian reporter that Britain laid no claim to a special relationship with the United States after all. Mr Christopher Chataway, leader of the Inner London...

CHRISTOPHER HOLLIS Marshall McLuhan proclaims the Death of Writing. He's written a book to prove the proposition. His publishers are eagerly inviting Readers to subscribe to...

POLITICAL COMMENTARY AUBERON WAUGH When. Mr Heath deplored the electorate's apparent apathy and disillusionment with politicians, which he saw as one of the most dangerous...

SPECIAL RELATIONSHIP JOHN GRAHAM Washington—On the face of it, and notwith- standing Lord Chalfont, the special Anglo- American relationship is very much alive. Only this week...

RHODESIA JOCK BRUCE-GARDYNE During one of his recent television appearances the Prime Minister, I recollect, expressed the hope that some of his critics overseas would `show...

TABLE TALK DENIS BROGAN The death of Sir James Learmonth, the great surgeon who saved the life, or at least the leg, of King George VI, evokes memories in me. Quite naturally,...

IN MEMORIAM CHRISTOPHER HOLLIS Many have written of Lord •Attlee's politi- cal career. It was his extraordinary personal character by which I confess that I was endlessly...

TELEVISION STUART HOOD As a subject for letters to the editor tele- vision interviewing has come to join such other seasonal favourites as the first cuckoo, vortices in baths...

THE PRESS DONALD McLACHLAN The appointment of Admiral Sir Norman Denning to be the new Secretary of the Services Press and Broadcasting Committee comes just at the right...

CONSUMING INTEREST LESLIE ADRIAN Foes of Bobby Kennedy are whooping with joy at having unearthed a photograph of him hold- ing a fat, half-smoked cigar. I doubt if this dis-...

J. W. M. THOMPSON If I had a hundred dollars to spare I think I would spend the money on becoming an honorary citizen of Anguilla. The misfortunes of this minute Caribbean...

The modicum is the messuage

PERSONAL COLUMN ANTHONY BURGESS I make no apology for that title, especially as Professor McLuhan will, if he goes on as he is g oing on, be forced to use it himself sooner or...

From the 'Spectator', 12 October 1867—The terrible panic of last week on the Bourse was caused by a rumour that the Emperor had sud- denly shown symptoms of softening of the...

The apostle of Bloomsbury BOOKS

One to dip into

DAVID WILLIAMS Savonarola thought you shouldn't bathe in leap years. I am one who finds odd factual nuggets of this sort nice to know about, and so for a long time now I've...

Vernon Watkins, who died on 8 October while visiting professor of English literature at the Uni- versity of Washington, Seattle, was one of the most distinguished poets of our...

C. B. COX The Sea Years of Joseph Conrad Jerry Allen (Methuen 63s) Joseph Conrad's short story, 'The Secret Sharer,' begins: 'On my right hand there were lines of fishing...

C. NORTHCOTE PARKINSON Management and Machiavelli Antony Jay (Hodder and Stoughton 25s) A current illusion is that ancient and mediaeval history can be regarded as irrelevant...

Pushkin David Margarshack (Chapman and Hall 63s). The first English biography for thirty years of the famous Russian writer who was killed in a duel in 1837. Strongly recom-...

One up to the waxworks ARTS

ROY STRONG Whatever is happening to Madame Tussaud? Tossing aside poke bonnet, shawl and crinoline, she is legging it with the best of them in Baker Street these days. Those of...

ART BRYAN ROBERTSON The best looking exhibition in London at the moment is the recent sculpture by Bryan Kneale at the Redfern Gallery: the work confirms first impressions in...

THEATRE Dan Dare's Arden HILARY SPURLING The Cherry Orchard (Queen's) Let's All Go Down the Strand (Phoenix) Clifford Williams's As You Like It has much in common with the...

NICHOLAS DAVENPORT On Monday the Prime Minister took the chair at a meeting of the National Economic Develop- ment Council for the first time as our Economic Overlord. The...

CHRISTOPHER FILDES Wednesday : 'We reject as an instrument of economic policy the creation of a permanent pool of unemployment'—the Prime Minister. Thursday : 'The Government...

What to do about the Brain Drain

PORTFOLIO JOHN BULL The best is sometimes very expensive—particu- larly, I am bound to add, in Throgmorton Street when share prices have reached record heights. The 500 shares...

FINANCE USA BILL JANEWAY would be rash in present circumstances to surrender our freedom of action to the Federal Reserve Board of the United States.' So wrote Keynes,...

CUSTOS Everyone expected the share markets to boil over after the fantastic rise of last week—the biggest for six years—and so they did on Monday morning, but the final results...

Sir: From 9 October the simple act of sharing a bottle of wine at dinner, and then driving home, became illegal. So now our politicians have made criminals of us all. On a...

of Teachers and the National Association- of Schoolmasters. I. for my sins. joined one after the other and came to the same conclusion as Mr Pearce. The problem is. where does...

Vietnam: how to end the war

Vietnam seems to shed more heat than light upon the subject. Mr Pulitzer states that the United States has The legal, political, moral, and spiritual right' to be in Vietnam....

Sir: As a member of one of the teachers' asso- ciations criticised by Mr Pearce (6 October), I should like to comment on the substance of his complaints. (I) The two...

Sir: Mr Sanders (Letters, 6 October) may be right in his potted version of history relating to the choice of leadership of the Conservative party— although I personally would...

Sir : May I, as a reader of your periodical for many years now, welcome the appearance in your columns of Messrs Fildes, ffolkes and Waugh, whose work, to judge from the first...

Sir : I feel I must congratulate Mr Charles Reid on his sensitive obituary of Sir Malcolm Sargent (6 October). Sir Malcolm always used to say that he felt it was his vocation...

Sir: Thanks to Strix's 'Fairy Gold' (4 August) I learned that I was three years older than need be (sixty-three) and not two years too young to claim postwar credit. In...

Sir: May I bring to the attention of your readers a comfortable contemporary myth? This is that there are far more prospective adopters than there are children available. A few...

Sir: The letter from Graham Greene in the issue of 22 September had a curious ending. He denounced as 'war propagandists' Cardinal Spell- man and 'Bishop Sheehan.' Now, there is...

AFTERTHOUGHT JOHN WELLS I have always found a kind of excruciating pleasure in sitting alone in restaurants. It may be that the unnatural act of eating solo in pub- lic...