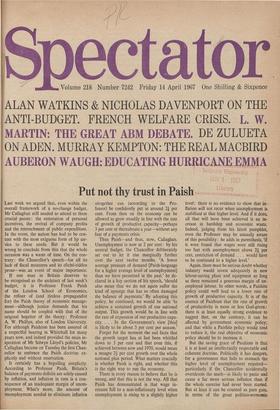 Put not thy trust in Paish

Last week we argued that, even within the overall framework of a no-change budget, Mr Callaghan still needed to attend to three crucial points : the restoration of personal...

Most of our readers will be aware from the announcement made earlier this week that a change in the proprietorship of the SPECTATOR has been arranged. Mr Ian Gilmour, MP, who...

Getting out of Aden

This was the week in which Prince Charles passed his driving test in a family saloon and Foinavon won the Grand National because he was too far behind the field to fall down...

POLITICAL COMMENTARY ALAN WATKINS Scientists have recently come up with the con- cept of anti-matter. Mr James Callaghan is not to be outdone. He has perfected the...

Must the Federation die?

ADEN PHILIP DE ZULUETA Aden—As the UN Mission made its ignominious retreat from Aden one of its members was re- ported as claiming bitterly that Britain was responsible for...

Crisis in the welfare state

FRANCE MARC ULLMANN Paris—M Michel Debre is perhaps the most worried man in France. Long one of the inti- mates of General de Gaulle, at the head of the most important...

From the 'Spectator,' 13 April 1867—Mr. Disraeli strengthened his hands on Saturday and Monday, by receiving Conservative deputations from working men, which he received with...

AMERICA MURRAY KEMPTON New York—William Manchester's The Death of a President is clerical and Barbara Garson's MacBird is anti-clerical; yet each will have trouble making its...

J. \\T M. THOMPSON If a policeman or some other more shadowy official investigator chooses to tap my tele- phone, he has to obtain, the permission of the Home Secretary before...

TELEVISION STUART HOOD Sometimes the old Corp.—if I may relapse into the language of the tribe—is no slouch at public relations. Take Huw Wheldon's recent trip to the States....

THE PRESS DONALD McLACHLAN How much courage does it take to write a column like Cassandra? I asked myself that when I read the Prime Minister's tribute on the front page of the...

MEDICINE JOHN ROWAN WILSON One of the enemies of a good community medical service is the melodramatic approach. Because medicine is an exciting subject going through a period...

AUTOMATION GILES PLAYFAIR Before starting on a journey, so London Trans- port informs its customers, they MUST have a valid ticket or authority. This is a singularly...

PERSONAL COLUMN AUBERON WAUGH The first half of this year is going to reveal a great bulge in the birth-rate of the profes- sional and upper middle classes, comparable to the...

Earth Earth is unruly. Cut her and she runs, she crumbles like brown rough mercury, will not be disciplined. Proud gardeners runnel her, straight-edge and order her; she,...

Blood in the matzos BOOKS

ANTHONY BURGESS In matters of art the categorising urge is a dangerous one, but it is born into us, like Original Sin. Talk of Bernard Malamud leads to talk of Saul Bellow and...

NEVILLE BRAYBROOKE When Edward Thomas was killed at Arras fifty years ago this month on 9 April 1917, 'a mirror of England was shattered.' The words are those of Walter de la...

ANTHONY QUINTON With the possible exception of Whitehead, Rudolf Carnap has been the most influential philosophical immigrant from Europe to the United States in the last...

P. J. HONEY The Viet Cong Douglas Pike (MIT Press 72s) The most prevalent view of what is now hap- pening in Vietnam sees the United States, the richest and most powerful...

'You don't mind, do you,' he'll say 'but I've spilt my beer All over your radiogram.' Or, 'I'm frightfully sorry, But I've put my foot through your lampshade.' When you...

Rapier of the week ARTS

HILARY SPURLING Opening late in the richest week in the theatre so far this year, Le Ieu de tamour et du hasard has been more or less crowded out, not to say cold-shouldered....

ART BRYAN ROBERTSON The scene in the galleries just now provides me with a theme touching on current problems of figuration as opposed to complete abstraction, and on the new...

BALLET CLEMENT CRISP There is nothing quite so dispiriting as being on the outside looking in—in this case sitting In a theatre surrounded by an enraptured audience while you...

Flanders hair PENELOPE HOUSTON Intimate Lighting (Paris-Pullman, 'A') The Sand Pebbles (Metropole, 'A') Some movies make life hard for themselves, and harder still for the...

MUSIC EDWARD BOYLE Not for a long while have I enjoyed an even- ing at the Festival Hall more than the Royal Philharmonic Society's concert last Wednesday week of Haydn and...

Towards a New Financial Agency? MONEY

NICHOLAS DAVENPORT A Chancellor who takes an hour and a half to say that he is doing nothing to add to our grievous fiscal burdens will clearly disappoint a City which had...

CUSTOS The budget had as much effect on the stock markets as any weekend speech by any minister of Cabinet rank. In fact, the effect was wearing off after the first hour. The...

Hope for the goose

JOHN BULL The scope for spectacular investment initiatives w hich most budgets produce was missing from Mr Callaghan's speech on Tuesday afternoon. It would be a mistake,...

CONSUMING INTEREST LESLIE ADRIAN It is not just the cost of living that has risen. Five years ago when Which? discussed the price of funerals the minimum for a simple...

Sir: 'In existing prisons,' Lord Mountbatten writes in his security

report, 'there are no water closets in the cellk„ and chamber pots are provided. . . . I was not surprised to find these arrangements in the nineteenth century prisons, but I...

Sr: It is no doubt hopeless, bearing in mind the narcotic effect which the language of defence exPcrts has on their sense of the human- and the just, to point out what Mr Ivor...

Sir: Your contributor Keith Kyle in his article on Turkey, 'Freedom or else' (10 March)twrites as one might expect from transient' visitors to any country. He doesn't tell us...

Sir: Yes, John Rowan Wilson is right. I have much the same background and experience, and the prospect outlined is surely a probability. The key to it is his comment, 'the kind...

when he refers to the 'opiate of deterrence' in your issue of 31 March, but I. think he makes a mistake when he attempts to equate the prewar crises of Czechoslovakia is 1938...

with alarm and despondency. Far more people need general practitioners than need specialists, therefore everything should be done to encourage general practice. At present the...

Sir: Mr McLachlan says (10 March) he must not talk politics in his column, but between the lines it comes through repeatedly that he will only die happy when every trade union...

A letter to my godson

Sir: Simon Raven cannot write a bad sentence and the letter to his son had all his usual sinewy elegance of style. It was also a rather depressing communica- tion. Any boy of...

Sir: For several years I have been attempting to trace the portraits of John Ruskin. The Library Edition of Ruskin's Works contains a catalogue of the portraits known to the...

Sir: I hope that you refused to be blinded by the science of a correspondent who suggested (SPECTA• TOR, 31 March) that theologians need not panic if the empty tomb proved not...