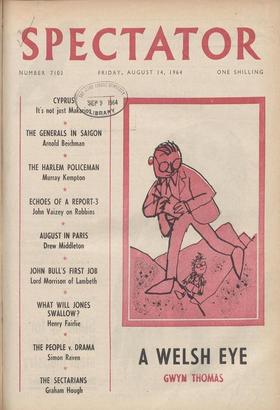 It's not just Makarios

I T is futile to blame President Makarios for the present situation in Cyprus. In the eight months since the crisis broke out he has behaved with absolute consistency. From the...

Portrait of the Week— A WEEK OF SOUND AND FURY,

With the loudest voice that of the Cypriot High Commissioner in London, who warned that 'Cyprus will not make any concessions, even if it means a third world war.' Peking...

The Generals Fall Out

MICHAEL SEI.ZER writes from Tel Aviv: 'We became a State but we have not yet become a nation,' is how the problem of Israel's ethnic and cultural diversity is often de- scribed....

From MURRAY KEMPTON NEW YORK A ousr has been cooler than the mismanagers of our affairs deserve. Its breezes have blown away that summer madness which was the proximate cause...

CHANCHAL SARKAR writes from New Delhi: The returning coveys of Indians from Burma, the trend of the laws relating to foreigners (meaning Indians, really) in Ceylon and the...

ECHOES OF A REPORT-3

The Conservative Robbins By JOHN VAIZEY T an Robbins Report stands out as one of the most remarkable official documents published for many years. Its careful and detailed work...

By RANDOLPH S. CHURCHILL r FIE Boothby libel case against the Daily Mirror has been the subject of much talk. possessing myself some practical knowledge of the law of libel, I...

From DREW MIDDLETON PARIS T HE song celebrates April in Paris. I'll take August. Traffic is at a minimum. Parking space is no problem. You can really see the city. The great...

By GWYN THOMAS ETWEEN Porth and Trebanog lies my village, 1.3 Cymmer. My life between two and ten years of age wore itself wild and bandy-legged on that fierce and fascinating...

BY CHRISTOPHER HOLLIS What is important is that there is an almost total failure in this country to use and extend the methods of opinion measurement developed in the United...

What Will Jones Swallow?

By HENRY FAIRLIE W HENEvER Ronald Knox was faced by the attempts of some churchmen to reform, or dilute, the dogma or worship of their Church, their arguments, he said, could...

THE MATHEMATICS OF SOUTHERN RHODESIA

SIR, — In your editorial of August 7 you cast doubts on the ability of the Southern Rhodesia economy to expand sufficiently to enable Africans to enrol in large numbers on the...

SIR,—The Bishop of Southwark refers to the Church of Scotland

as 'Established.' The Church of Scotland voluntarily ceased to be established in 1929 when a reunion took place with the United Free Church, which comprised the majority of...

SIR,—Mr. Campbell suggests that there will be voting parity between

black and white in Southern Rhodesia in eight years. He supports this by saying that his government is planning an education pro- gramme which will provide 55,000 Africans with...

SIR,—The Bishop of Southwark implies that if the Methodist and

Anglican Churches were united, the Methodist Minister who was recently expelled by the act of the Methodist Conference would have been allowed to continue. May I ask him how...

SIR, — Catholics can only wish the Church of England well and

hope that, established or disestablished, she will continue to play her formidable part in the preservation of Christian truths and values. However, little service is done to...

SIR.— A plain-thinking agnostic like myself hardly knows where to

begin untwisting the tortuous argu- Ments used in the two extraordinary articles on dis- establishment which have recently appeared in your Pages! Bishop Stockwood truly states...

Sta,—The article by Mr. Gresham Cooke, MP, on the Exclusive

Brethren seems to recommend com- bating intolerance by intolerance. Apart from the fact that this has never been suc- cessful, it can also not be described as Christian. JOHN...

and put it into the mouth of Mrs. Allonby in A Woman of No Importance, no doubt, pace Sir Denis Brogan, 'spoiling' it in the process. Mrs. Allonby: They say, Lady Hunstanton,...

THE EXCLUSIVE TAYLORITES SIR,—Surely Mr. Gresham Cooke need not be

apolo- getic about attacking the teachings of James Taylor Jr., even though he seems to feel that he is being untrue to his belief in religious freedom. Even the most sincere...

The People versus Drama

y SIMON RAVEN Whenever a play is commissioned for tele- vision, whenever a synopsis or a draft is sub- mitted, something of this kind is said. A theatre • or cinema audience,...

SIR,—As a citizen of one of our debtor nations, it

scarcely becomes you to criticise our free choice of a presidential candidate in the United States. You seem to be showing the 'manifestations of intolerance' you ascribe to...

SIR,—'Zambia's Holy War' described by Harry Franklin in his article last week has a parallel in the Holy War of Hung Siu-tsuen, a student of the Reverend Roberts, who started...

MIXING IT Sts,—My main objection to The Review, which Mr.

Ian Hamilton (Spectator, August 7) must have been not so much simple-minded as plain stupid not to have grasped, is what the hell is he up to producing a special number on 'The...

Incredibly, the William Blake Trust issues no suitable catalogue to its display of his illumin- ated books at the Tate Gallery until September 6. Forgettable inscriptions on...

By MALCOLM RUTHERFORD Victor. (Aldwych.) Mr. Whatnot. (New Arts.) IF no one had told me be- forehand I wonder if I'd have known that Roger Vitrac's Victor was im- portant, a...

GEORG SOLT) brought the Covent Garden company and his celebrated daimon, demon or, not to put too fine a point on it, demon to the Proms for a concert performance of Verdi's...

The Other Side of Hitchcock

By IAN CAMERON THERE are two oppos- ing points of view about Hitchcock. Therefore, without any exaggera- tion, there are two com- pletely different ways of looking at the...

The Sectarians By GRAHAM HOUGH r r i im first American novelist, Charles Brockden Brown, was greatly admired in the early nineteenth century by Shelley and his circle. A...

The Micropolitics of the Fourth Republic

Two or three years ago, the rumour ran round the senior common rooms that Mr. Williams was working on a vast opus, which would be the definitive work on the politics of the...

My head is filled with a thick paste Heavy as porridge, the warm room Booming with sludge and the sounds of fog. Nothing can spill from my skull; But I keep feeling it overflow,...

POOR Alexander Gorbatov, General of the Soviet Army, Hero of the Soviet Union: after so many years of silence, his own grim but very estimable story has finally burst through...

A History of Pornography. By H. Montgomery Hyde. (Heinemann, 25s.) H. MONTGOMERY HYDE'S A History of Por- nography is a study of the provenance, content and distribution of...

LONDON bridge is a game in which London has been doubled and redoubled and is now vulner- able. So vulnerable that the twenty-year plan promised in the 'London White Paper' of...

The poets are to blame, or partly so : Wordsworth's pretty pigmy, plump with joy, And Henry Vaughan's white celestial thoughts Mislead as much as Millais' chubby boy Or...

Out of the Snake Pit

The Year of the Angry Rabbit. By Russell Braddon. (Heinemann, 18s.) The Liquidator. By John Gardner. (Muller, 18s.) HANNAH GREEN is a pseudonym and I Never Promised You a Rose...

By LOTHBURY M R. B. W. MASON, the retiring chairman of the Newrith Group, has given shareholders a confident statement in his report for the year ended March 31, 1964. The...

By CUSTOS S OME history is being made in the stock markets as well as in Cyprus and the Gulf of Tongking. Wall Street has suffered the first sizeable fall since its 'high' in...

Something to Play With

By MARY HOLLAND SEARCHING around for a sense of grievance recently, I realised that I cannot remember a toy, in my life before I was nine years old. I am assured by those in a...

Few Cheers for the AA By LESLIE ADRIAN SOME weeks ago, when I reported the goings-on at this year's annual general meeting of the Automobile Association, I asked readers for...

By ALAN BRIEN He then poses some whimsically offensive questions to those who wish to observe the ban such as: 'How does the traveller know that the particular dose of Spanish...