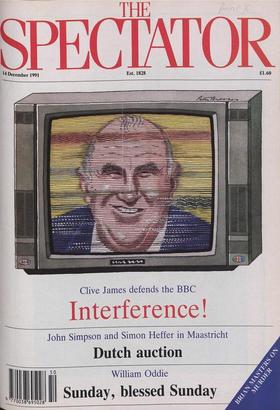 Saying no when you mean yes A ccountants searching through the accounts of Robert Maxwell's companies discovered that about £450 million of pen- sion fund money was missing. It...

Britain is still on the conveyor-belt to federalism, with or without the 'F' word SIMON HEFFER Maastricht A guiding principle of Mr Major's regime has been that it should take...

WILLIAM DALRYMPLE L ast Wednesday, my landlady's son arrived back from one of his mysterious import/export' trips to Thailand. To cele- brate his safe return, Mrs Bedi threw a...

Naught for your Comfort but something for your joy CHARLES MOORE The New Joy of Sex, by Alex Comfort MB, DSc (Mitchell Beazley, £17.99), announces itself as 'a wise, witty,...

IN DEFENCE OF CLASSIC BROADCASTING

Clive James argues that broadcasting is too important to be left to the newspapers — and their proprietors HALF OF Britain's broadcasting system having been put into turmoil...

I ARRIVED on the ward last week to find a patient with two prison officers (one must not call them warders these days) sitting at the end of his bed. He had been admitted to our...

John Simpson sees Maastricht as the end of a tired old era Maastricht I LOOKED around my hotel room. It was cold and poorly furnished, and the curtains were so thin the...

SPECTATOR IN THE KREMLIN

THE AMERICANS, we suspect, are Making up their minds to check immi- gration if they can. An acute observer on the spot prophesied this change of feeling in our columns twenty...

ON THE SCENT OF BIG MONEY

William Cash on how aggressive marketing fuels the perfume industry ACAPULCO, Mexico — the 1940s: An Indiana Jones-style plane bumps along a deserted runway by the sea....

A profile of Robert Maxwell's friend, Lord Williams, who has never lived up to his promise as a schoolboy ANYONE WHO feels an occasional twinge of nostalgia for the Seventies...

NEVER EVER ON A SUNDAY

William Oddie investigates the motives of those campaigning to keep Sunday special WHAT IS the Keep Sunday Special Cam- paign (KSSC)? It is, if you believe its apol- ogists,...

An organisation which has ruled racing for 200 years struggles for survival. Peter °borne reports NEXT Tuesday, Lord Hartington, the Senior Steward of the Jockey Club and heir...

A reader received this letter from the Strand Theatre, Aldwych. Thank you for your letter and I am sorry to hear that you have found cause to complain. I was very surprised to...

A CASE OF MISTAKEN IDENTITY

Sandra Barwick talks to a man wrongly suspected of the rape of a child HE WAS TOLD later that there was an angry crowd outside waiting to shout abuse at him. But by the time...

A Phoenix born from England's ashes PAUL JOHNSON F or me, the squalid haggling at Maas- tricht marked the end of England, or at any rate of the England I was brought up to...

MEN like Maxwell create willing dupes. In patronising political figures, he did no more than Beaverbrook — who kept a cabinet minister on retainer — but that patronage was...

The hindquarters of an elephant, or where the Maxwell money went CHRISTOPHER FILDES I say of Robert Maxwell what the Caliph said of Hassan: his impudence had a mon- strous...

THERE HAD to be a 'my nights of passion with Captain Bob' revelation, and there is. Wendy has told (or sold) her steamy (or seamy) story to the Sun, the Mirror Group's chief...

ROBERT Maxwell's are not the only accounts with a hole in them. Some $4 bil- lion seems to be missing from the late Sovi- et Union's reserves. Valentin Falin, head of the late...

IF THERE is one last public service that Robert Maxwell has performed, it is to teach us not to put blind trust in blind trusts or take our pension funds for grant- ed. There is...

Sir: Rory Knight Bruce's piece 'Masters of the public vendetta' (30 November), says a lot more about the author than it does about Norman Lamont and Andrew Neil. The central...

Sir: How interesting it was to read Roy Jenkins's review (Books, 30 November) of a biography of Lyndon Johnson, which he embellishes with two LBJ stories of his own. Modestly he...

Sir: I refer to your editorial 'The noblest prospect' (30 November), which was, as they say, thought-provoking. You say that the nation is governed by the United King- dom...

LETTERS Up the workers

Sir: I read your extraordinary leading arti- cle on the subject of Sunday trading (`The English Sunday', 7 December) having just received a letter from a friend who happens to...

When Homer snores Hilary Mantel THE COMPLETE ESSAYS by V.S. Pritchett Chatto & Windus, £35, pp.1300 hen you are young you are taught that certain books are Great; or if you...

Richard Ingrams A ll one can say in favour of this year's Christmas funnies is that for once we have been spared Scarfe and Steadman. Those looking for something a bit savage...

The appealing flavour of dead Herrick

John Whitworth FROM THE MORNING OF THE WORLD: POEMS FROM THE MANYOSHU translated by Graeme Wilson HarperCollins, £l2, pp.93 T h e Manyoshu is the earliest surviving anthology...

Palaces and monasteries of Old Russia

Through the killer's eyes

Some crime, not much punishment

The bare people behind the bare facts

"Why have we had to wait 20 years for this book? Like the glorious, festering piles of stone he draws, John Glashan is a great national monument that should be open to the...

My swivelling eye steadied, narrowed, measured. Gradually, I loosened my tongue. Like the chameleon I had one eye on you at first: you, obviously planning to eat alone;...

Caroline Moore LE 1 1ERS TO SARTRE by Simone de Beauvoir, edited by Quintin Hoare Radius, £20, pp. 531 I n his introduction, Quintin Hoare affects to believe that if you...

Mary Keen S ir Roy Strong's glossy commonplace book for the gardener (A Celebration of Gardens, HarperCollins, £20) is dedicated to Calista Coggeshall, 'whose tree grows in our...

Frederic Raphael THE SEPHARDI STORY by Chaim Raphael Valentine Mitchell, £18.50, £9.95, pp.294 L ewis Namier, quizzed on why he did not concern himself with the history of...

Final Books of the Year

A nthony Beevor's Crete: The Battle and the Resistance (John Murray, £19.95) is an easy front-runner. It is the first book to give us the Enigma decrypts, on whose...

Art Modern artist Af ter a brief excursion to the other end of the paper, I return to more familiar haunts with this corollary to last week's article. One thing I hope to...

A comedy for fathers Robert Tanitch on a social satire due for revival B etween 1904 and 1907 theatre manag- er John Vedrenne" and director-playwright Harley Granville Barker...

Die Fledermaus (London Coliseum) Viennese fancies Rupert Christiansen I don't think Richard Jones can like opera very much. Perhaps music bores him too, and what he really...

The Addams Family (PG', selected cinemas) Matador (18', Electric Cinema) Graveyard smash Harriet Waugh T wo black comedies which complement each other in a rather grisly way...

A long afternoon Peter Phillips I t has perforce been a year or two since I last attended Gramophone Magazine's annual award-giving ceremony: in the meantime it has gone...

A pleasure and a privilege Ursula Buchan I am so lucky to have The Manor. My late husband, Freddie, bought it during the last war. It was such a sadness to him that, because...

Close-up crawlies Martyn Harris I n Lifesense this week (BBC 1, 8.30 p.m. , Monday) we moved up the evolutionary scale to the creatures which prey upon man, and into the skull...

Rough justice Taki ne thing I was told by people who know about such matters just before the start of the libel case brought against me by Madame Rosemary Marcie-Merciere back...

Out of the woodwork Jeffrey Bernard T hank God for central heating and John Osborne. I have just treated myself to a copy of Almost a Gentleman and it is ter- rific stuff,...

Black is beautiful Zenga Longmore N ot so long ago, to be an air hostess was to have the most glamorous job any woman could imagine. Every girl in my pri- mary school...

d's E asy Diner, Smollensky's Balloon and On the Strand

I GET NERVOUS at this time of year. My conscience begins to gnaw. Let me explain: at exactly this time, six years ago now, I Made something between a suggestion and a promise to...

Player of the Year Raymond Keene H aving weighed the evidence from the past year's tournaments and matches I have no hesitation in declaring Nigel Short the Spectator Player...

A friend of mine once wrote a whole novel — it was published, with this title too inspired by the newspaper headline: ACROBAT ADMITS. Within a maximum of 150 words, you are...

1039: Slanging match by Mass A first prize of £20 and two further prizes of £10 (or, for UK solvers, a copy of Chambers English Dictionary — ring the word 'Dictionary') for the...

Untimely end Frank Keating WHEN they buried Stan Mortenson at Blackpool in Junc, one mourner whispered to the other, 'I bet this will be known as the Matthews funeral.' The...

Dear Mary. . . Q. Last week, at a small dinner party, I was i ntroduced to someone who I wrongly b elieved to be a friend of a friend of mine. I i mmediately said, 'I believe...