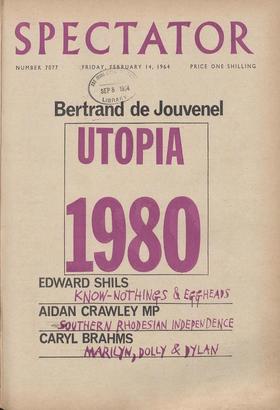 —Portrait of the Week— EVERYONE WAS GOING TO AMERICA: the

L a commedia a fi nita,' Mr. Macmillan said to a reporter shortly after he had resigned. It was an exit line in the grand manner. Last weekend, when he announced his retirement...

From SARAH GAINHAM BONN W tinTr.vtit may happen in Cyprus, the sug- gestion that German troops should form part of a police force there has produced some very interesting...

The Unwelcome Choice By DAVID WATT , It follows that by the spring British Ministers must either have negotiated and introduced a Southern Rhodesian Independence Bill or have...

By AIDAN CRAWLEY, MP HE British Government appears to have I decided not to grant Southern Rhodesia its independence when Northern Rhodesia and Nyasaland, its two former...

It has not so far been possible to get any information as to what has happened to one of the Spectator's South African correspondents, Randolph Vigne. Our letters to him are not...

All those who appreciate the dry wine of irony will get a rare enjoyment from the flavour of Herbert Kretzmer's letter in this issue. How I agree with him! What impertinence of...

Fighting for Peace I've been reading a closely documented booklet

just published by the Independent Information Centre which gives quite amazing ' and irrefutable evidence of the extent of East German rearmament, Civil War in the Making: 'The...

The Excitement of Writing

Many good things come out of the West Riding of Yorkshire. It is not surprising that Mr. Clegg, the County Education Officer, has been able to compile an enchanting anthology of...

By THE REV. JOHN GOSS ER-MPS it is as well that the Church's Par- r liament (soon to become a Synod) is under sentence of death. A short, sharp demise at an appointed hour is...

I WONDER sometimes if the Daily Express ever study their own earlier editorials. This one, for example, from June 20, 1951: 'Housewives' Hero. 'His White Paper condemning...

By J. W. M. THOMPSON Fleet Street is full of rumours and guesses about the Sun at the moment—partly because this week brought the final agreement, between Mr. King's...

SIR,—Having attended the New York event at which the TW3

team re-enacted their Kennedy tribute pro- gramme I was totally unaware that the evening of January 27 had been a 'nightmare' and a 'humiliating business' until I returned to...

SIR,-1 haven't read The Fourth of June or seen the

play and 1 haven't read The Hill since about 1914, hut, unless my memory fails me, Mr. David Pryce- 'Jones has got his names and characters mixed up in the Spectator. 1 think...

SIR,—I love the cheerfulness with which Kenneth Tynan tries to throw my insults back in my face with- out any rhyme and precious little reason. Like him I have now re-read his...

SIR,—As a citizen of Southern Rhodesia who has lived there

for fourteen years, I write to emphasise the importance of Mr. Nyandoro's article last week. More than anyone else, George Nyandoro has the affection, respect and backing of...

SIR,—It is good of Mr. Playfair to inform us that

something like the self-determinate sentence was being practised in Amsterdam in 1596, and that some- thing like it was suggested by Mr. Sanford Bates in America in 1960. I hope...

SIR,—One could not 'help admiring the frankness and forcefulness with

which Lord Salisbury expressed his imperialistic views in his letter to you last week on 'Trouble in Africa' It opened one's eyes. Accord- ing to him the control of Africa, 'so...

SIR,—Quoodle says 'it is to article of faith amongst Tories that Panorama is the equivalent of a free Labour Party political broadcast.' Since Sir Alec Douglas-Home became...

on the ground that 'the 1944 Speaker's Conference on Electoral Reform rejected over- whelmingly proportional representation and the alternative vote.' Of course it did—because...

SIR,—And will Mr. Davenport now give some Avuncular Advice to Mr. Maudling just in case Mr. Wilson is not in a position to benefit from his? Fl. D. SILLS

Sn ,—Like Quoodle I listened to Mr. Wilson in Gal- lery. I thought that he was fluent, but noticed that, although he was never at a loss for a word, he was sometimes at a loss...

SIR,--In your leading article of February 7 you describe the

Vietnamese people as 'fighting an alien regime.' But one of the essential things about the Vietnam situation—especially when questions of. neutralisation are considered—is that...

SIR,—One hesitates to disagree with Dr. M. R. Ridley, whose Keats' Craftsmanship remains, after thirty years, one of the finest books in this field; but some of his relative...

SIR,—We were amused to read Leslie Adrian's cap- sule course on brochure study, and wish that hi.; lessons had gone a little deeper into the subject. From his comments one...

SIR,—Anthony Ward may be right in thinking that Amis 'places'

Roger Micheldene less than he would like to be thought to. But he misuses the quotation he offers about 'nonsense.' The point is not that Micheldene dismisses 'all that the mind...

The Rules of the Game

Who's Afraid of Virginia Woolf? (Piccadilly.) CONSIDER a good modern play. A realistic frame- work and recognisable people but nothing too constricting because there must be...

From CARYL BRAHMS NEW YORK After the Fall, Arthur Miller's new play in the tent theatre, is what every- one is talking of. They will have seen it, or be about to see it, or...

Art of the Possible

His latest work, especially, is analogous rather to a piece of filmcraft like Antonioni's L'Eclipse. Here the camera shifts abruptly from small sig- nificant detail to large,...

IT is said that when Miss Moffo became the third victim of the maledizione which has plainly been on this new Rigoletto from the start, Callas re- marked she wouldn't mind...

The New Angels CX' cer- tificate) and Bandits at Orgosolo ('U' cer- tificate). (Academy.) DOCUMENTARY, good and necessary word though it is, has, if we're honest, a rather...

IT depends, of course, on what you mean by 'away match.' When Tottenham are away to Arsenal or Chelsea (traumatic recol- lection), thousands of Spurs supporters find themselves...

Know-Nothings and Eggheads By EDWARD SHILS TTin relations between philosophers and kings in American politics have long lived in what Saul Bellow has called the 'long john'...

Proconsul in Politics. By A. M. Gollin. (Blond, 63s.) is still almost impossible for an Englishman to see Lord Milner straight. He personifies, perhaps more than any other...

`MICKEY SPILLANE books,' says the advertising sheet which accompanied this paperback, 'are now required reading in the writing courses of six different universities.' I can well...

Mao Against Khrushchev : A Short History of the Sino-Soviet Conflict. By David Floyd. (Pall Mall Press, 50s.) State and Law : Soviet and Yugoslav Theory. By No Lapenna....

The Tourist Beneath the Gown

DEFINITIVE travel books have now been written about most' of the world's accessible tourist centres. So eager trippers, bursting with holiday impressions, must seek indirect...

Snow fell last night. The town, the,country lie Submissive to its faceless empery. I walked this morning past the smothered woods, Then past the shopfronts and the doggy flats....

A Question of Identity

The Water-Castle. By Brenda Chamberlain. (Hodder and Stoughton, 16s.) SOMETIMES there conies an outstanding novel which makes a reviewer wish he had ten times as much space in...

By NICHOLAS DAVENPORT THE massive document which the Government sub- mitted to the National In- comes Commission would appear to have been writ- ten by a novice in the monastic...

By CUSTOS T itt , : equity markets have quietened down, but are still very sensitive to political news. As I remarked last week, if the Labour Party comes into power a complete...

By LOTHBURY A N OTHER new record profit has been made by H. M. Hobson, manufacturers of aircraft components for the year ended September 30, 1963. The trading profit has...

Accessories on the Road By LESLIE ADRIAN In wet weather any car overtaking you at speed can throw a wake of spray and mud at your windscreen and temporarily blind you. It...

By MARY HOLLAND He didn't, I'm pleased to say, consider me common rich. For one thing I obviously wasn't rich and he made up for my equally obvious lack of background by...

By ALAN BRIEN As a collectivist, I am theoretically in favour of the widest possible sharing of the world's goods. If asked to give up my grey and bitty garden to make a green...