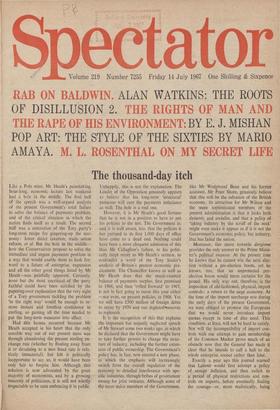 Like a Polo mint, Mr Heath's painstaking, hour-long, economic lecture last weekend had d hole in the middle. The first half of the speech was a well-argued analysis of the...

And seen to be done

Nothing seems to go right in the D Notice affair. The 'impartial inquiry' which has been set up to gear Colonel Lohan's reply to alle- gations made against him by the Prime...

At the present time, in theory at least, both major political parties are committed to a policy of economic growth. The principal difference is that, whereas the Tories believe...

In Brussels M Couve de Murville told the Com- mon Market Ministers that six was company, seven, eight, nine or thirteen a crowd. The official reaction in London was that the...

The roots of disillusion 2

POLITICAL COMMENTARY ALAN WATKINS do not object to import controls on doctrinal grounds.... Certainly, there could be occasions where their use would be justified and permis-...

SOUTH AFRICA STANLEY UYS Cape Town—Mr Vorster has been Prime Minis- ter for only ten months, and already South Africans are talking about the 'Vorster era,' as though it were...

From the 'Spectator,' 13 July 1867 — On religious questions the Lords seem almost more liberal than the Commons. When the Offices' and Oaths' Bill, as passed in the Lower House,...

House of the dead

RUSSIA TIBOR SZAMUELY In July 1951, en route to a forced labour camp, I spent three weeks in the transit prison of the north Russian town of Kirov. It was a very hot summer,...

THE PRESS DONALD McLACHLAN I can see no reason why the decision of the Financial Times to charge eightpence instead of sixpence from next Monday should start a rush by the...

TELEVISION STUART HOOD So far as I know, no investigation has been made into the influence of the cinema or tele- vision on race relations. To what extent, I should like to...

J. W. M. THOMPSON Some of the uproar created by Mr Crossman's weekend remarks must be put down to high temperatures and late nights at Westminster. Even so, no subsequent...

The rights of man and the rape of his environment:

a blueprint for a peaceful revolution EDWARD J. MISHAN Dr Mishan is reader in economics at the London School of Economics. His new and unorthodox book 'The Costs of Economic...

MEDICINE JOHN ROWAN WILSON Just over a week ago, a well-known London publisher was involved in a car crash in the Midlands. He was admitted to a local hospital with concussion...

A whiff of sour grapeshot

OXFORD BEVIS HILLIER The Oxford and Cambridge final examination results are now appearing almost daily in The Times. I scan them with the bitterness a man might feel who read...

Don't let's be beastly to Baldwin

PERSONAL COLUMN LORD BUTLER Two centenary celebrations will have taken place within the course of a few months, one of the birth of James Ramsay MacDonald and the other of that...

4 M. L. ROSENTHAL For even the Paphian Venus seems A goddess o'er the realms of love, When silver-shrined in shadowy grove : Aye, or let offerings nicely placed But hide...

C. B. COX A few years ago a group of American fanatics were awaiting the end of the world, believing they would be flown off in flying saucers just before the cataclysm. They...

ELIZABETH JENNINGS Robert Frost died in 1963 at a great age. His life had never really been a public one and he spent most of it in his native New England, interrupted, when he...

RICHARD BRETT-SMITH Refuelling jet bombers by tanker aircraft has become so commonplace an operation in both America's Strategic Air Command and nAF Bomber Command that people...

The style of the sixties ARTS

MARIO AMAYA The one constant thing that seems to dominate the young during this decade is a sense of style. Not for three quarters of a century—perhaps since the age - of the...

ART BRYAN ROBERTSON When an artist reaches a certain age and a certain position it is often just the moment to re-establish contact with his work and to re- think the premises...

NICHOLAS DAVENPORT The all-powerful United States is a 'law unto itself, economically and politically, and there is nothing that we can do about it. If it chooses to turn a...

JOHN BULL Interest rates are on the way up again. These movements are an international phenomenon, as Mr Callaghan acknowledged when he met the finance ministers of the United...

CONSUMING INTEREST LESLIE ADRIAN In the beginning was the word, and the %void was 'cure.' Then snake the Proprietary Asso- ciation of Great Britain and the word became...

CUSTOS There has been a fair recovery in the gilt- edged market, perhaps on 'bear' covering, for investors had become unduly pessimistic. It is thought that the recovery may be...

Sir: The public have to thank you and the editor

of The Times for fighting for their freedom. 'The character of no man is safe,' but to use the privilege of Parliament so as to slander someone out of busi- ness, and having...

Public schools: the facts of life

Sir: Whatever a public school may have to offer, it is certainly not, as Mr Raven argues (30 June), an education in `the facts of life.' No cloistered introspective institution...

Slandered out of business

Sir: Your journal has done a public service in providing a forum for the views of Colonel Lohan and Mr Pincher about the evidence given to the Radcliffe Committee. One of the...

Sir: Freedom from want being the first purpose of the Beveridge Plan, 6,500,000 pensioners, in- cluding 65,000 well-to-do persons such as Mr Mac- millan and Lord Montgomery, are...

Sir: Not having been privileged to go to a public

school, I am not qualified to criticise Mr Simon Raven's amusing article. However, apart from pointing out that most grammar schools finish be- fore four o'clock (confer `six...

Sir: While I am flattered by Mr Quentin de la

Bedoyere's reference (Letters, 30 June) to my re- freshing honesty, I was not, of course, writing about the contents of the Abortion Bill, but, as I made quite clear, about the...

Sir: Believing that abortion on demand ought to be allowed, Mrs J. S. Mason (23 June) naturally sees nothing objectionable in the Medical Termina- tion of Pregnancy Bill. For...

Abortion and the single girl Sir: The appearance of 'Abortion

and the single girl' (7 July) is completely out of place in a periodical regarded as a serious weekly. As I read the piece. 1 felt I had strayed into the Bond Game, and this...

Sir: I was sorry that the SPECTATOR should publish a letter by a correspondent, who, not surprisingly, did not sign his name, abusing provincial hospitals for the apparent...

JOHN WELLS Every major scandal, particularly a scandal that has been presented in any way salaciously by the press, inevitably leaves behind it various underground myths that...

Solution next week Solution to Crossword no. 1281. Across. 1