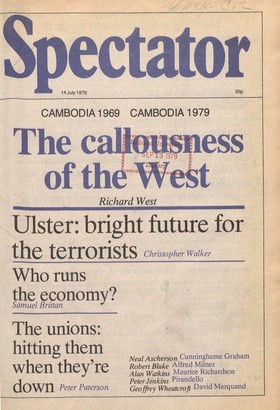 T he Confrontation with the trade unions is the most critical episode in the history of Mrs Thatcher's Government. Alth o ,,nk "16 11 'confrontation' has overtones of hostility...

Mrs Thatcher's stage whisper Ferdinand Mount And how is she getting on then? What do they think of her in the Labour Party? It is time to consult our Senior and Usually...

Readers may recall the gushingly selfcon gratulatory issue of the Spectator which we published last autumn to mark our 150th a nniversary — an issue in which we spoke highly of...

Through the minefield in Cambodia

Richard West Ubon, East Thailand Princess Anne's visit last week to a refugee camp here, had something of the appearance of a military exercise. The road to the airport was...

Carter in the mountains

Nicholas von Hoffman Washington By cancelling several speeches and remaining in contemplative silence at Camp David, Mr Carter has shown himself to be that rare politician,...

The death of Lady Waldegrave, the wife of Lord Carlingford, which occurred almost suddenly on Saturday, must be recorded as one of the events of the week, for it has saddened a...

Hanging on to Barre

Sam White Paris The French Prime Minister, Raymond Barre, is approaching his third anniversary in that post and, according to all the precedents of the Fifth Republic, he...

Building site of the Maghreb

Stephen Aris Algiers One of the most curious sights in Algiers — surely one of the most beautiful cities of the Mediterranean — is the cathedral, a huge, monstrously ugly...

Hitting them when they're down

Peter Paterson The predictable uproar which greeted the government's 'working paper' on reforming labour law should not be allowed to disguise the relief felt by most trade...

Bright future for the terrorists

Christopher Walker Belfast 'It is beyond the capability of Irish terrorists to obtain a nuclear weapon of fission or fusion type, or even components of such a weapon. Nor do we...

Christopher Booker In a few months time the Seventies come to an end — at which point, I have no doubt, we shall be deluged with retrospective articles and television...

Sir: I much appreciated the appropriately swingeing way that Mr Theodoracopulos dealt in your issue of 30 June with Mr Richard Clogg's A Short History of Modern Greece. I am...

Sir: Having read Benny Green's remarks on J.M. Barrie (so wittily headlined 'Private parts') I am happy to realise that I too suffer from arrested emotional development, because...

Sir: Alexander Chancellor really cannot be allowed to get away with so many misleading statements in his Notebook for 30 June. Why does he say the refugee problem is a 'legacy'...

Sir: I read with attention two pages, at least, of your paper of 7 July; the first was that where Mr Chancellor properly castigates his fellow journalists for seizing and...

Sir: Why did Tim Garton Ash (7 July) describe Action as 'Mosley's short-lived periodical'? After Sir Harold Nicolson there were several editors up to the journal's demise when...

Sir: I congratulate the Spectator on Geoffrey Wheatcroft's article on Reynolds Stone. The miserable little notice about Reynolds Stone in the Daily Telegraph made me, and no...

Sir: Of course your correspondent is right (23 June) — Miss Spark's verse is chaff and straw. I am reminded of an earlier and greater novelist who thought she was a poet also —...

The destruction of Cambodia

• Richard West Sideshow: Kissinger, Nixon and the Destruction of Cambodia William Shawcross (Deutsch £6.95) An American Congressman who visited Phnom Penh shortly before it...

Neal Ascherson Cunninghame Graham: A Critical Biography Cedric Watts and Laurence Davies (Cambridge £12.50) As the authors of this book plainly feel, it is a pity that Robert...

Jeffrey Meyers You May Well Ask Naomi Mitchison (Gollancz E6.50) The third volume of Naomi Mitchison's autobiography concerns the 20 years between the wars — recovering from...

Robert Blake Milner Terence H. O'Brien (Constable £1 0) Alfred Milner was essentially a crossbencher. He was too much of a social reformer to be a Tory and too much of an...

Hugh Montgomery-Massingberd Inside Marbled Halls Anthony Masters (Sidgwick £7.95) When I was even younger and greener, I understood a London socialite to say that he had been...

Paul Ableman The Egghead Republic Arno Schmidt (Marion Boyars £5.95) This is a sprightly effort and I was surprised to find, referring back to the copyright page after I'd...

John McEwen 'John Singer Sargent, and the Edwardian age' (National Portrait Gallery, till 9 September) is a small exhibition of the painter's portraits and figure sketches with...

Rodney Milnes Coal fan tutte (Giyndeboume) Cavalleria rusticana and Pagilacci (Covent Garden) A year ago the first act of Sir Peter Hall's first production of Cosi was as near...

Richard lngrams In the footsteps of John Freeman and his over-rated Face to Face interviews comes young David Dimbleby with a new series of profiles called Person to Person....

Jeffrey Bernard Last Monday in the Daily Telegraph Christie Davies wrote an interesting piece about homosexuality still being taboo in an otherwise lax and permissive society....

Geoffrey Wheatcroft Mr Roy Jenkins was about to leave Westminster for Brussels, the 'European ideal', and a well-deserved disposable income of some £40,000 per annum. (I once...