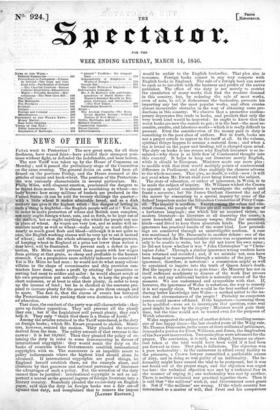 FATAL week to Protection ! The new great men, for all their freshness, have waxed faint—have yielded their strongest posi- -tioni without fight, or defended the indefensible,...

Peaceable counsels appeared to be advancing in the United States,

at the date of the last accounts. The "international ad- dresses" of the Peace party here are not fruitless. A practical newspaper, the New York Journal of Commerce, responds...

The disturbances in Poland are still a leading European topic

; but the information respecting them afforded by the journals, is still meagre, confused, and contradictory. The accounts are derived from the newspapers of countries where a...

FAMINE IN IRELAND. Before the House of Commons entered upon the Free-trade discussions on Monday, Mr. O'CONNELL put a question, of which he had given notice, "Whether the...

A BILL TO AMEND THE LAWS RELATING TO THE LMTORTATION OT CORN. [Note.—The figures arranged at the end of the lines, and the words printed in liatird are proposed to be inserted...

Tam Queen left the Isle of Wight yesterday morning, accompanied by Prince Albert, the children, and the Royal suite; and, travelling by the usual routes, reached Bnekingham...

Court of Aldermen was held on Tuesday. The first business entered apon related to the correspondence which had taken place between the Town-Clerk and the Clerk to Christ's...

Saturday was the polling-day for Bridport ; and a severe contest there was from the opening of the poll till its close. The excitement within the booth extended to the mob...

The Senate of the University of Glasgow have resolved to petition Par- liament for the repeal of the Scottish University tests, in so far as they affect lay Professors. The...

POLsino.—As our Political Summary embraces in as connected a form as the disjointed and contradictory details which have reached this country will admit of, all the prominent...

The contest for the county of Mayo has terminated in favour of Mr. Joseph Miles M`Donnell, the Repeal candidate. On Saturday evening the official declaration was made—For...

Tuesday's Gazette announces the appointment of Lieutenant-General the Earl of Cathcart to be Captain-General and Governor-in-chief of her Majesty's Pro- vinces of Canada, Nova...

Mr. J. A. Gordon, an extensive landowner in East Somerset,

addressed a circular on the 4th ultimo, to above sixty of his tenants, offering to relieve them of their farms at Lady-day, if they felt alarmed at the repeal of the Corn-laws;...

Another precautionary measure for ameliorating the apprehended cala- mity in Ireland was introduced into the House of Commons yesterday evening; and produced an ebullition of...

The Frankfort correspondent of the Morning Herald gives the official

announcement of the occupation of Cracow by the Austrian Commander- in-chief— " Cracow, March 3, 1846. "Conjointly with the Imperial Russian troops, and a portion of my forces,...

The Paris Tapers and correspondence of Thursday contain few new

facts con- nected with the Polish insurrection. The Journal des Debuts expresses fears that the orders given to the commanders of the troops of the three great Powers now again...

STOCK EXCHANGE, FRIDAY AFTERNOON. The Stocks for the April dividend closed at the commencement of the week, and business in them has of course been entirely suspended. Some...

THE Commons made "no House" on Thursday, though a great debate was expected. Why this loss of precious time, all too short for the indispensable business of the session?...

POLISH INSURRECTIONS. Pousif insurrections are always misconstrued ; on the one hand, by those who see in them nothing but the realizing of their own theories and wishes ; on...

to the Lieutenant Hawkey who shot Mr. Seton at Gosport, has been tried ; and has been acquitted, in the teeth of the facts, the evidence, and the Judge's charge to the Jury....

RESPONSIBILITY OF EMPLOYERS IN WORKS OF DANGER.

THE labourers engaged in the construction of railways are a pe- culiar class, immensely increased in number, though not originally created, by the railway furor. The "navveys,"...

THE COMIC WRITERS OF ENGLAND.

The last lecture of a course on this subject, extending from Chaucer through Ben Jonson and Beaumont and Fletcher to Butler, was delivered by Mr. Cowden Clarke, at the London...

IT was a great improvement to the Strand the demolition of Butcher Row. Nothing could confer a greater advantage on the inhabitants of the vicinity in respect of health and...

13.10osepar, Life and Correspondence of David Borne; from the Papers bequeathed by his Nephew to the Royal Society of Edinburgh, and other Original Sources. By John Hill...

Dn. MASSIE is a Nonconformist minister : his health having failed in the discharge of his duties, change of scene was prescribed by his medi- cal attendant. This prescription...

THE true test of a story is an abridgment. The structure which is na- turally planned to exhibit a probable action, and whose parts have pur- pose in themselves and connexion...

THE ANCIENT CONCERTS. THE Ancient Concert season began on Wednesday; and it promises to be productive, as several of the past seasons have been, of considerable interest and...

The first performance for the present season was given in Harley Street on Monday; when works characteristic of three distinct epochs in the life of the great master formed the...

From Harsh 6th to Harsh 121h. BOOKS. A History of Greece: L Legendary Greece; II. Grecian History to the reign of Peisistratus at Athens. By George Grote, Esq. Scotland, its...

Evening Service in B flat, for Double Choir. Composed by

Thomas Attwood Walrnisley, M.A. '1'rin. Coll., Professor of Music in the University, and Organist of Trinity and St. John's Colleges. A note to this production informs us that...

This collection of pieces, complete in a vocal form and

printed in the proper clefs for score-reading, promises to combine the agreeable and the useful in a manner seldom realized by publications affecting a permanent and classical...

On the 4th March, at Middleton Hall, Northumberland, the Wife of George Hughes Hughes, Esq., Of a Son. On the 5th, at Cohen. County Louth, the Lady of Captain Wynne, R.A., of a...