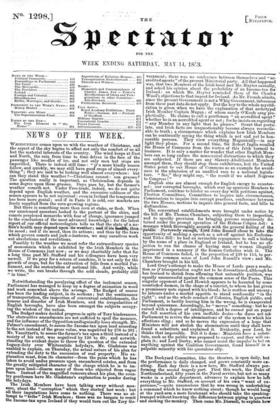 The Dockyard Committee, like the theatres, is open daily, but

the performance is daily changed, and grows constantly more ex- citing. Each day there is a new hero, Mr. Stafford alwa_ys per- forming the second tragedy part. First this week,...

Warrstrxrinn comes upon us with the weather of Christmas, and the aspect of the sky begins to affect not only the comfort of us all but the material interests of the country....

Notwithstanding the paralyzing effect of the inclement season, Parliament has

managed to keep up a degree of animation in word and work somewhat above the average. The Budget of course has been the leading subject, in its sections ; but the continuance of...

King Leopold of Belgium has been travelling, with his intelli-

gent and spirited heir, to Berlin, and thence to Yienna,—to coun- teract French influence, says one rumour ; to negotiate commercial alliances, says another. But it is a...

The Irish "Crystal Palace" has been opened with all the

honours that "the Castle" can give, and it promises to be a brilliant show. The building is praised as superior to the London edifice : the spirit of the Irish promoters is...

in the grounds and driving out through the adjacent country. Besides this walking and carriage exercise, Prince Albert has ridden out. The Earl of Aberdeen, the Earl of...

The gathering of ladies and gentlemen at Stafford House on Saturday, to welcome Mrs. Harriet Beecher Stowe, was very large. It included the Duke and Duchess of Sutherland, the...

FRANCE.—The Empress is now reported to be convalescent, and she has left her bed ; but the gravity of her illness can no longer be concealed. Fresh orders have been given to...

The military encampment at Earshot will soon be effected. Lieute- nant-General Lord Seaton will command in chief. The following par- ticulars have been published this week....

Pseudonymous letters were sent to the late Duke of Wellington, as Commander-in-chief, with the view of destroying the character of Colo- nel Hall M.P. The Colonel suspected that...

SATURDAY. The House of Commons had a long but not an interesting sitting last night. The renewed debate on the Legacy-duty, in Committee of Ways and Means was more edifying in...

Count Rechberg's appearance at Milan has been followed by the

sus- pension of the proceedings of the sequestration commission. A telegraphic despatch, received this morning, states that Sartorius has now declined the post of Minister for...

In the Court of Exchequer, yesterday, Mr. Baron Parke and

a Special Jury decided that the Potteries Free Press is a newspaper, and that Mr. Collet is liable for the penalties. Mr. Phinn, on the part of the Crown, stated that the...

STOCK EXCHANGE, FRIDAY AFTERNOON. The Royal assent having been given to the bill for the Conversion of the Three per Cent Stocks, books were opened on Tuesday at the Bank of...

A Dublin correspondent sends us a fresh warning as to

the proceedings of the officials at the Education Board. "I have excellent reason for believing that the Government are about to throw Archbishop Whately over, and to bundle...

TOPICS OF THE* DAY.

THE IRISH ELEMENT IN " THE HOUSE." " CORRUPTION " is a charge which Mr. Duffy and other Irish Mem- hers fond of big words, throw broadcast at their own colleagues, at...

From a circular sent to us we learn that a

number of members, sub- scribers, and friends of the Sacred Harmonic Society, have resolved to present a testimonial to Mr. Robert Bowley, the Society's honorary libra- rian, as...

The peculiar feature of the concert of the New Philharmonic

Society, on Wednesday, was a composition designated as "The Music to Milton's Paradise Lost," and stated to be only the first part of a work embracing all the principal features...

A new impulse has been given to the performances at the St. James's Theatre by the engagement of M. Regnier; who, in a little piece called Le DonhoMme Tadis, gives a picture of...

BOWE confusion of ideas seems to have guided those who object to the bill introduced to the House of Commons by Mr. Thomas Chambers, and introduced in anticipation to the House...

THE debate on transportation, although originating in a desire to continue that system as it has been, in reality furnishes very evi- dent proofs that sound opinion and practice...

DISRAELI AS A WITNESS.

THE evidence taken before the Committee to inquire into Dockyard appointments and promotions grows more relishing as it proceeds. First this week came the venerable Duke of...

MEMORIALS AND CORRESPONDENCE OP CHARLES TAMES FOX.. TirE laws and institutions under which a people is trained—the works of art, literature, and science it produces—the civil...

POWER'S RECOLLECTIONS OF CHINA AND PEREGRINA- TIONS IN OTHER COUNTRIES. *

THE vicissitudes of the Commissariat service have thrown Deputy- Assistant-Commissary-General Tyrone Power into many countries, of which this volume contains his recollections....

ROYAL ACADEMY EXHIBITION: THIRD NOTICE. The most conspicuous author of Historical Pictures is Mr. Ward. "The Executioner tying Wishart's book around the neck of Montrose, at...

A very interesting work, which we were invited to view, will remain for a short while in the hands of Mr. Anthony, of Duke Street, St. James's. It is a half-length life-sized...

An "Exhibition of the Works of Modern German Artists" is open to the public at No. 168 New Bond Street. The name of Leasing heads the published list of contributing painters,...