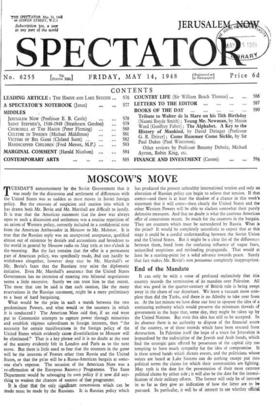 End of the Mandate

It can only be with a sense of profound melancholy that this country records the termination of its mandate over Palestine. All that was good in the quarter-century of British...

T UESDAY'S announcement by the Soviet Government that it was ready for the discussion and settlement of differences with the United States was as sudden as most moves in Soviet...

No Control of Atomic Energy

It may yet turn out to be one of the major disasters of history that within less than three years of the Hiroshima explosion the attempt to secure the international control of...

Before the Italian elections were over it was already clear that the success of the Christian Democrats in forming and maintaining an effective Government was second only in...

Korea has been divided, since the end of the war, into American and Russian zones of occupation. There is little likelihood of this unfortunate country being united until the...

Whether the British Nationality Bill, to which the House of Lords gave a second reading on Tuesday, is more important than it is complex or more complex than it is important is...

The most bitter opponents of the Government's oil policy could probably be brought to admit that the problem to be faced is not easy. The slow recovery of the tanker fleet from...

A Charter for Children

The unopposed passage of the Children Bill through the House of Commons last week is an.event of some note, in spite of the fact that the measure was initiated in another place...

T HE Conference at The Hague, the approach of Whitsun and the fact that the debate on the signatures to the Nenni telegram had been postponed until after the recess accounted...

THE HAGUE AND LAKE SUCCESS

I T was probably chance, but a very fortunate chance, which ordained that the American Secretary of State should have been making a strong defence of the United Nations before a...

What, I have often wondered, is the matter with Wiltshire

that so few people have written books about it? The question is prompted by the announcement that the Victoria County History, which has hitherto eschewed Wiltshire altogether,...

A SPECTATO R'S NOTEBOOK I IMAGINE the Australian cricketers will

look back on few more agreeable experiences during their tour (apart from winning a Test Match or two) than the dinner given them by Sir Stanley Holmes, M.P., at the House of...

On the occasion of a bad railway accident several years

ago it was suggested by The Spectator that when a train is stopped at night unexpectedly the guard should run back over the line not with a quite inadequate red lamp, but with a...

The lecture Sir Richard Livingstoni gave to the National Book

League this year makes a welcome appearance in the form of a half-crown booklet published by the Cambridge University Press. Its subject is University education and its attitude...

I hope the publishers of Mr. Churchill's latest memoirs have

been piling up a stock of paper for the last year or two in pre- paration for the appearance of his first volume in September. By all accounts demand will exceed supply...

The dispute between British Railways and its dining-car attendants over

the zo per cent. surcharge on meals raises interesting and not unimportant questions. The to per cent. was originally in lieu of tips, a satisfactory arrangement for which there...

Both Hcuses of Parliament fortunately have their lighter moments. In

the House of Lords on Tuesday Viscount Simon, referring to a clatise in the British Nationality Bill referring to " every person born in the United Kingdom and the Colonies,"...

By PROFESSOR E. B. CASTLE* W E must have been the last unofficial citizens to leave Lydda airport. It was difficult to apportion our gratitude—whether to Providence, to the...

By STRATHEARN GORDON S T. STEPHEN'S HALL, with its avenue of marble statues and its stimulating wall-paintings, was rebuilt after the fire of r834 to the exact ground plan and...

CHURCHILL AT THE HAGUE

By PETER FLEMING THE Dakota, marching steadily westward over the grey sea, is laden with delegates and the cheeses which we unanimously and expensively bought at Schipol. We...

By MICHAEL MIDDLETON F ROM the air the impacted ice along the coast looked like soap- flakes on top of lard. The land was drab - and putty-coloured, and pitted with many lakes....

By FRED MESSER, M.P. F ACILITIES for the education of handicapped children are still inadequate. It is difficult, of course, to provide special schools for sparsely-populated...

By HAROLD NICOLSON T HE days accumulate inexorably into weeks, and the months inexorably into years : one ends by becoming extremely middle- aged. There is no compensation for...

"This Was a Woman." (Empire.) — "The Emperor Waltz." (Carlton.)—" The Beast With Five Fingers." (Warner.) Miss SONIA DRESDEL has a gift for being attractively vile, but all the...

As I sat at the last of the Gerald Cooper concerts and listened to Professor Dent's eloquent and generous panegyric of the founder of the series, I wondered how many of the...

THE THEATRE The Paragon." By Roland and Michael Pertwee. (Fortune.) Tins is what was formerly, and aptly, called a strong play, and of its kind it is very good. Sir Robert...

ALLUSIONS to the Three Ice-men or Saints have been so numerous that they were, I feared, beginning to rival the three balls over the pawnbrokers' shops that beset the pen of...

In the Garden Twice in recent years the rough grass

in an orchard has been burnt (after mowing round the widely separated standard trees). One result is that every single buttercup (of a comely but poisonous race) has perished....

Save the Trees The Council for the Preservation of Rural

England, which held its annual meeting last week, continues to grow in strength, and with both force and promptitude comes to the aid 'of local watch-dogs. Among a host of...

Rooks on the Farm With its usual ignorance of rural

details, the Government has been urging the destruction of rooks. It has been demonstrated again and again that the rook is beneficial. I remember discussing the question with a...

AUGUSTUS JOHN has chosen to exhibit his latest work, not at Burling- ton House, but at the Leicester Galleries. This, his first one-man show for a good many years, includes a...

A Most Norfolk Naturalist Perhaps the most facetious incident I

can recall in the career of naturalists was the removal of a fire escape at Geneva, desired for approaching the elevated nest (so far as I remember) of a honey buriard. The...

Sut,—Knowing from personal experience about conditions in Spain, I was amazed to see from your leading article in last week's Spectator that you advocate the inclusion of Spain...

Sta,—Mr. de Madariaga is always read with pleasure and profit, and obviously On Hamlet will give most of us an invigorating shock. " The romantic measles of the nineteenth...

PARTITION AND THE CROWN Sta,—Despite such utterances by Southern Irish politicians as Professor Savory quoted in his letter last week, I just ddn't agree with him that...

Sta, 1 --I have from time to time been much interested in

articles in The Spectator on Irish affairs; and was so in the recent one, Six and Twenty- Six. I do not, however, remember seeing in any of them any good reasons definitely...

SIR,—Dr. Allen has brought up a problem which has already caused a split among the Resistentialists. The question whether a passive or active attitude should be adopted towards...

THE LORDS AND HANGING

SIR,—Mr. Strang writes to disparage, in terms of supercilious arrogance, the debate in the House of Lords upon capital punishment. Not many, I feel, will agree with his...

Snt,—Your remarks on the report of the Committee of Enquiry into the Distribution of Building Materials and Components rest on a miscon- ception of American experience which...

May 7th, Mr. W. J. Strang appears to be yet another of those modem psychologists who believe that all wrongdoers, from murderers to small boys who break shop windows, are mental...

SIR,—Allow me to say in reply to Mr. Fleming that

Bradley did not sponsor the " good boy " view of Hamlet. His theory of Shakespearian tragedy was that the defects, mental or moral, of the hero unfitted him from coping with...

Stu,—I feel we all owe a debt of gratitude to

Dr. C. K. Allen for his masterly and erudite synthesis of some aspects—and those of universal interest—of resistentialism. On considering his letter I wondered whether this...

WIDOWS UNDER THE HEALTH ACT SIR, — I am wondering whether it

is yet generally known that the new National Insurance Act, so much publicised as bringing increased benefits for all, will, in fact, abolish one benefit granted in recent years...

Stir,—According to S. Watson Smith, a threefold increase in the numbers to be attended to by the doctors is anticipated when the new Health Service starts. Does this mean that...

SIR,—Sir Osbert Sitwell and his sister criticise the way they were brought up in caustic terms and at the same time exploit it for their and our benefit. Their father, who seems...

DEATH ON THE ROADS StEt,—As Janus says, the fuss made

about the execution of a few murderers is surprising when one considers that 5,000 deaths on the road every year attract so little attention. In addition to this big death-...

Snt,—Mr. Nott has given a timely challenge when he says that we must show that our ideas are better than Communist ideas. But I doubt if the Christian Churches have the energy,...

Sit,—Mr. Nicolson, in his Marginal Comment on April 30th, seemingly invites us to recall some other writer of genius (besides d'Annunzio) who has taken archaeology as the theme...

Snt,—There is surely a grave defect in the. Children Bill, as in most other discussions and projects about child welfare. I refer to the fact that children in general, and boys...

Sitt,—When reading your excellent leading article of April 30th, I am puzzled why in " the tragic evolution of events" the Woodhead Report of the Palestine Partition Commission...

Newman : The First Half

Young Mr. Newman. By Maisie Ward. (Sheed and Ward. 21s.) IN this long book Miss Ward confines herself to the forty-four years from Newman's birth to "his journey's end" in 1845....

Concert of Praise Tribute to Walter de la Mare on His 75th Birthday. (Faber and Faber. 15s.) IT is one of the proofs of fame that praise of famous men, if it be just and true,...

DR. DIR1NGER is already well known to scholars for his valuable work on Israelite inscriptions and for his L'Alfabeto nella Storia della Civiltd (i937), and he now appeals to an...

Two Quiet Lives. By David Cecil. (Constable. 12s. 6d.) A. How d'you like this new thing of Cecil's ? B. Enormously. But I can't see why he should call either Dorothy Osborne's...

Russia for the Man in the Street

Come Hammer Come Sickle. By Sir Paul Dukes. (Cassell. 10s. 6d.) THE problem of recommending " a good book on Russia " to the enquiring but uninformed " man in the street " is...

IA Book Token for one guinea will be awarded to the sender of the first correct solution of this week's crossword to be opened after noon on Tuesday week May 25th. Envelopes...

SOLUTION TO CROSSWORD No. 475

Ballet School. By John Gabriel. (Faber and Faber. 42s.) THERE

is an increasing tendency in every art today to take us behind the scenes, or—to change the metaphor—to " show us how the wheels go round." Whether such enlightenment results in...

An Attic in Jermyn Street. By Robert Henrey. (Dent. 10s. 6d.) faults in a first novel. The story itself is simple. Three generations of native women in the Island of Trinidad...

By CUSTOS Ir is a commentary on the newly-found caution of the average investor that this week's developments in the international political field have not led to any wild...