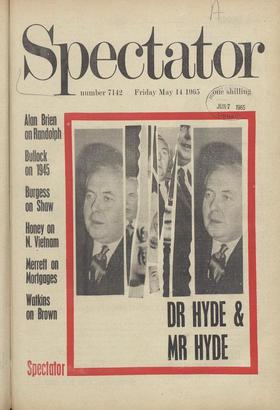 Alm Brien on Randolph Bullock on 1945 Burgess on Show

Honey on N. Vietnam Merrell on Mortgages Watkins on Brown

T FIE custard-pie ending to the steel debate should not blind us as to the identity of the villain. It certainly wasn't Mr. Fred Lee. Nobody told him what was going on and he...

IT WAS JUST LIKE OLD TIMES in the Labour party, as the steel vote toppled the Government off its 'tightrope and there followed all the tradi- tional ritual of left versus right...

them. Brezhnev and Kosygin are gingerly de- moting them. Those suspected of too strong a loyalty to the past never had a comfortable time in the Soviet set-up. But they are more...

What the Vote Meant LEO BARON writes from Bulawayo: By the time polling day arrived the electorate, thoroughly bemused by a campaign which must surely be unique, had clearly...

GEOFFREY BLOCK writes: The provisional recommendations of the Parliamentary Boundary

CHRISTOPHER BOOKER writes: Dog may not actually eat dog—but that

doesn't stand in the way of most dogs having a good bitch when the .opportunity arises. Like, for in- stance, that longtime King of the Inside Story Mr. Chapman Pincher who, in...

By A. .1. MERRETT S OME 70 per cent of the 1.1 million houses which change hands in Britain every year are primarily financed through mortgages from one source or another and...

THE LAW Wardships and Secrecy

R. A. CLINE writes: A fortnight ago this column noted signs of an outbreak of sustained parliamentary sniping at judicial decisions. The firing has certainly not died down, for...

Mr. Brown's Famous Last Words By ALAN WATKINS E are governed by words,' said Stanley Baldwin, and the events of the past week have certainly borne out the truth of his...

When it appeared to Mr. Lee A Paper White as white could be, The Government's last Fiat, Then Donnelly must needs complain His conscience bade him to abstain, And so did...

The Man in the NATO Maelstrom By SYLVIA SPRIGGE N o Secretary-General of the North Atlantic Treaty Organisation has found the post a sinecure. When Dirk U. Stikker resigned...

Last week the MLF study group resumed its sessions in Paris. This week of course the NATO Foreign Ministers have been meeting in London. The continuing study group provides a...

Sir Kenneth Pickthorn's book review in this issue reminds me of the only occasion he ever Offered me an apology—and a very Pickthornian one it was. I was, as Leader of the House...

Glossary The steel debate adds some fascinating quo- tations to

the parliamentary dictionary. 'I find this a sad occasion' means 'I am going to vote for the Government.' Absence owing to 'the calls of nature' means 'Mr. George Brown has...

Cinema fans and the disarmers alike know that `defence intellectuals' such as Dr. Strangelove, and Professor Groteschole of Fail Safe, who terrifies the big brass with his easy...

Old prejudices die hard and no one could be more prejudiced in favour of Rugby Union than Quoodle. All the same, the best game I've seen this year of either code was the Rugby...

One of the first recommendations of the Par- liamentary Boundary Commissioners has been to abolish the constituency of Enfield West. The news was, of course, expected, indeed...

That Jeremy Isaacs is going to edit Panorama is excellent news. He has one of the quickest and best minds in television. But old anchor-man Dimbleby is going to stay, and...

THE WAR THAT HAD TO BE-2

Unconditional Surrender By ALAN BULLOCK S EEN across the space of twenty years the spring and summer of 1945 now appear a narrow strip of sunlight between two tunnels. Ever...

By P..1. HONEY A THOUGH Vietnam has for years been one of the world's major danger spots and the press daily reports news of South Vietnam, conditions in the Communist-ruled...

By KENNETH PICKTHORN,MP A Companion of Honour,* by Colin Coote, is the story of Walter Elliot. To anyone coming new to the story, the title may at first seem slightly precious...

SIR,—A letter published in your issue of May 7 on

the Gibraltar crisis signed by Mr. Dudley Davies, has caused great consternation in Gibraltar, and the allegation that we are 30,000 foreigners shows how little Mr. Davies knows...

Back to the Flux

SIR,—Dr. Flew, in his review of my book, Lan- guage, Thought and Comprehension, in your issue of April 23—a review 1 have only just come across - says that my book is about the...

SIR,—In your issue of May 7, Mr. D. G. Davies asks three questions about the British possession of Gibraltar and invites valid answers. Starting with his third question, I...

Slit,—Mr. Davies's defence of General Franco's attitude towards Gibraltar would

Make more sense if the Spaniards themselves were to make the gesture in handing back Ceuta to the Moroccans. or perhaps he is unaware of the bitterness which exists in Moroccan...

am dining in a crowded restaurant with my fiancé and his mother; she does not like me very much. The conversation gets a bit heated and she an- nounces, in tones that can be...

SIR, —When, a few years ago, the then Archbishop of Canterbury (Dr. Fisher) suggested that British intellectuals should spend less time harping upon the horrors of thermonuclear...

am grateful to you for your article 'Com- monwealth Preference' concerning the Common- wcatth Arts Festival, which is to be held in the autumn between September 16 and October...

SIR,—I hope you will permit me to refer to an

in- cident which occurred several months ago in view of the fact that I have only recently seen the article on Mr. Warbey's visit to Vietnam in your issue of February 19, and...

• SIR.—In last week's Spectator. Mr. Goronwy Rees classed Thomas Jonathan Jackson as one of the Southern cavalry leaders in the War of the Rebellion. His famous infantry corps...

SIR, I regret to say that Mr. Mervyn Jones in his letter of May 7 is completely wrong in his concep- tion of American students. Besides the fact that I find his comparisons of...

in 1938, armed Nazi aggression should have been resisted—I agree wholeheartedly with him that it should—why should armed Communist aggression not be resisted in Vietnam today?...

StR,—Quoodle is too hasty in his praise of his recent discovery, the Post Office messenger service. I have been using this service for years. Once it served me admirably. But...

SIR,-1 could be wrong: I could have misread Mr. H. B. Isher . wood's letter in the Spectator of May 7: but froni my cursory reading of the letter it seemed to me that Mr....

Schools and Systems By TERENCE B E N DIXSON I T is often said that schools have been one of Britain's notable architectural successes since 1945. One indication that this may...

the narrator, Anthony Lawrence, the BBC's Far Peculiar, perverse and

absurd thin g s happenin g on the box. There was Early Bird, for instance, Exotic Week In spatter bits of bull-fighting and heart sur g ery With the idea that it is simultaneity...

AC CORDING to legend, Winston Churchill once ..said about Stanley Baldwin, 'Hist'ory may be harsh on that man'—then, as an afterthought— 'indeed, history will be harsh on that...

Splits in the Western Shaw's Prefer Invitation to a Gunfighter. (London Pavilio disguis 'U' certificate.) was a W ESTERNS were once thought as lowly 3 . 11 e see comics, as cosy...

The Two Shaws By ANTHONY BURGESS W I I LN I was in the sixth 'form in the late 1930s, it was considered smart to say that Shaw's prefaces were better than his plays. Young...

The Man of Good Sense

As plovers trail their wings To hide t nest from men's concern, Right lovers turn Talk that nears treasured things. The best of judgment says No case is won by what speech...

By VERNON WATKINS Vultures Fling bones to vultures, who dissect Thoughts of a living man when dead. Trust the wide wings to spread his shade And win what he hates most, respect.

Battle Royal. By Sir Tufton Beamish. (Muller, 35s.) ALL countries cherish their myths. We in par- ticular believe, and with some reason that parliamentary government surt,:d on...

The Carlyles at Home. By Thea Holme. (O.U.P., 35s.) MRS. THEA HoLme, wife of the Curator for the National Trust of 24 Cheyne Row, has written a modest but informative and...

THE current issue of Agenda presents a small `anthology' of new English poetry. There is no introduction or manifesto—simply an attempt to show as inclusive a range of the best...

Zentimental Journey. Olura. By Geoffrey Household. (Michael Joseph, 25s.) I WAS recently reminded by a waspish fellow- journalist that I had praised Morris -West's first novel...

Slowly the sea is parted from the sky: The light surprises, crinkling on the water. The white sun hardens; cliffs solidify. A long coast of red rock where three swans Engraves...

Investment Notes By CUSTOS T HE second week of the Stock Exchange ac- count has opened on a quiet note, most of the activity being confined to active dealings in steel shares....

By LOTHBURY sec 1964, group sales of Gallaher, cigarette and ; eq ' bacco manufacturers, rose to £429.6 million, chi ting the duty increase in April and the g prices in August....

The Writted Word By LESLIE ADRIAN It is her second experience of a writ for libel during her long career in what we now choose to call consumer protection. Those with com-...

By ALAN BRIEN THE first time I met Ran- dolph Churchill, he was standing alone in the exact centre of what seemed an enormous patterned carpet in his Westminster draw- ing-room....