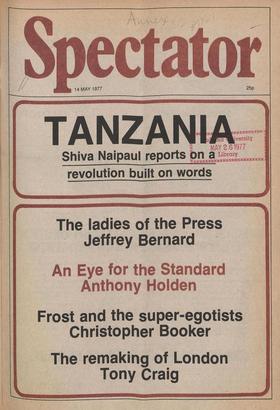 The education of a President

T he economic summit of the free industrialised world's heads of government, followed by that NATO s 8 , 11 lomit, have provided a useful enough opportunity Or our present bunch...

John Grigg In the consciousness of most British people there is only one Carter of any significance at the moment — the American president of that name who stole the show last...

The recent decision not to reveal the Royal k 4lt lily ' s share-holding suggests some truth uehind the persistent rumour that the .9, 1le en holds 4'/2 per cent of Rio Tinto...

Do as you would be done by Auberon Waugh Three things happened last week to convince me that law and order have broken down in the country. We have been lulled for so long by...

Nicholas von Hoffman Washington e Nixonian head was back, filling up "le television screen, explaining, expostulating and putting on his best perf ormance since the Checkers...

Taking the socialist road Shiva Naipaul 'You will like Tanzania,' the Asian girl had said. 'You will find it totally different from here in almost all respects.' Here' was...

The Eye has it?

Anthony Holden For the past several weeks, a food millionaire called Sir James Goldsmith has been trying to buy one newspaper and jail the editor of another. To him the two...

The remaking of London

The rise and fall of the Super-egotists

Christopher Booker Without wishing to add to the verbiage already lavished on the multi-million-dollar Drool-In between David Frost and Richard Nixon, I would just like to...

Jeffrey Bernard What an enormous number of silly, unliberated women there must be around to support all those women's magazines. And, dear God, aren't there a lot of funny...

Hans Keller Upon reflection (which is on the increase in proportion as the game is getting ever more boring), I never was a football supporter, contrary to the suspicions of...

Sir: A most interesting paragraph in Christopher Booker's Notebook (23'April) about fibreglass replicas. Perhaps someone could propose to the Italian government that the money...

Sir: Your Editorial, A New Policy for Ulster, asks for the necessary steps required to extirpate terrorism, in other words, for a full military campaign against the IRA. But...

Was it the EEC?

Sir: In view of the trends, the victory of the Labour Party at Grimsby was spectacular. Many voices in the media have offered the somewhat frivolous explanation of the Labour...

Sir: I wish to thank Richard Ingrams for expressing his forthright views (30 April) on the public flaunting via television of sexual abnormality, as if it were something healthy...

Sir: Mr. A. Forbes (30 April) fairly quoted my condemnation of the mass murder of Jews in Germany as `one of the most execrable crimes in all history', but asks the strange...

Sir: Readers of Richard West's article (23 April) on the by-elections at Ashfield and Grimsby may be interested to know that Lord Byron was not the most interesting person born...

Sir: John Evelyn's Library was the product of a gunpowder fortune. His father, uncle and grandfather manufactured that product from before the Armada to about the time of the...

Sir: It was quite like old times to read Richard West's realistic and perceptive assessment of the Fleet Street situation ia the Spectator (5 April). As one who has recently...

Sir: Timothy Raison's interesting article (9 April) seems to beg one question – how, if we return to collective bargaining, to mak e . it real and not so hopelessly one-sided,...

Sir: Mr Christopher Booker, in his Notebook (23 April), points out, right l Y enough, that 'archetype' has an 'abso lutely precise' meaning. So has 'literal- 1 Y' , yet in the...

Sir: I have been asked by a relative of the late Emperor Haile Selassie of Ethiopia undertake research with a view to possibl e publication of a book on the Imperial Fara ily of...

Nothing but the best Olivia manning 2r0wing Pains: The Shapin g of a Writer Daphne du Maurier (Gollancz £4.95) 'The child destined to be a writer is vulnerable to every wind...

Pat Rogers The Figure in the Landscape John Dixon Hunt (John Hopkins University Press £12.00) Like a hypochondriac who ransacks the medical dictionary, the British have never...

Nick Totton J. R. R. Tolkien: a Biography Humphrey Carpenter (Allen and Unwin £4.95) 'And after this, you might say, nothing else really happened.' With this disarmingly...

Peter Ackroyd The Castle of Crossed Destinies Ital° Calvino (Secker and Warburg £4.50) People play card-games with each other because they enjoy winning, but one PlaY s cards...

Benny Green Wisden's Cricketers' AlMarlaCk for 1977 (Sporting Handbooks .£4.25) Like spring, Wisden is a little late this year but, as usual, well worth the waiting for. The...

Terence Maloon An Artist's Life Pietro Annigoni (W.H. Allen 0.95) Florence, that carapace of bygone vitality, was where he grew up and trained to be an artist during the time...

Patrick Cosg rave I suppose the desire to 'tell it like it is' is strong in the mind of every professional man whose work has proved to be of interest to novelists,...

Bejart's ball Jan Murray Mart's Ballet of the Twentieth Century, which has just completed a controversial season at the London Coliseum, is as much a celebration of male...

Star struck John McEwen Anyone with the remotest interest in painting should go down to Oxford and see Frank Stella's aluminium reliefs (Museum of Modern Art, Oxford till May...

Greatness John Peter King Lear (Aldwych) Saint Joan (Old Vic) As soon as Donald Sinden enters you know that you are in the presence of greatness. At first glance the stage...

More heads Richard Ingrams A certain amount of moral indignation has b een expended about the huge sums of money which Richard Nixon has gained itntil his series of interviews...