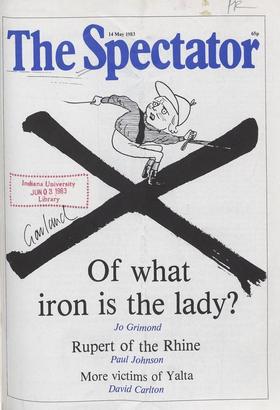 I n her conduct over the calling of the general election, Mrs Thatcher has given herself a quite unnecessary amount of trou- ble. Having got it into her head that she was a...

Any old iron? Jo Grimond `flood evening. As you know, I have V.J long been determined to hold the general election as soon as was decent and before the glow of that amazing...

Father Murphy's caper Auberon Waugh • Lourdes, High Pyrenees O ne must not gloat. A week of pilgrim- age to this Marian shrine with 575 Catholics from the north of England —...

Timothy Garton Ash Berlin A s Stern magazine accuses its own star-reporter of fraud, two major questions about the 'Hitler diaries' remain to be answered. 'Whodunnit?' is the...

Andrew Brown Stockholm There are two words for 'Truth' in 1 Russian: 'Istina', which means 'What actually is', and 'Pravda', which has more the sense of 'What ought to be'....

Richard West Tucson, Arizona A the 'Old Tucson' village built nearby for the filming of movie and TV westerns, the tourists are able to watch each afternoon a re-creation of...

The sandmen of Knutsford

The French are furious under an idea that the British Government is favouring the construction of a British Canal through the Isthmus of Suez. They think the credit of their...

David Carlton F or some years I have felt uneasy about 1' the way in which a number of publicists have raged against the British wartime policy of forcibly returning Russian...

Rupert of the Rhine Paul Johnson O n the occasion of its 10,000th edition, the Observer received an unexpected birthday present in the total disarray of its chief competitor...

Sir: It is pleasing to read townsman Roy Kerridge being observant of the countryside on his trip to the Hebrides (7 May). He should be informed, however, that the lichens he saw...

The cost of broadcasting

Sir: In his article 'Room for improvement' (7 May) on the Government's proposals for cable, Paul Johnson asks: 'If it is right to charge people to see, for example, the Grand...

Sir: Mr Mugger idge doubts the religious ap- plication of Graham Greene's reported self- d escription in 'a small miracle of grace for We who are semi-lapsed' (23 April). But...

Sir: James Hughes-Onslow in his admirable report (30 April) draws attention to the goings-on of Professor Singer at al at the Monash Bioethics Centre. I wonder what he thinks...

Sir: Richard West is able to assure Walter Kendall that the Moskva Hotel still func- tions in Belgrade. So too does Sofia's Hotel Bulgaria. Like the Pera Palace in Istanbul it...

Sir: Eric Heffer's article defending Liver- pool against Richard West (16 April) is a fine example of the sentimentality that has replaced thought among Labour politi- cians. To...

Boer war baby Sir: I so enjoyed Arthur Marshall's review Of Dr Cottle's book Names (7 May) which, I n turn, I expect to enjoy. I wonder if either gentleman has ever encountered...

Marghanita Laski Aunt Julia and the Scriptwriter Mario Vargas Llosa (Faber £7.95) T he belief that the craft of narrative fic- tion is alive, well, and putting on flesh in...

Francis King Porky Deborah Moggach (Cape £7.95) S ince the days of the Pharaohs, the Cenci and Byron, incest has come down in the world. Like bingo, dog-racing, going on...

A hero of our time

John Jolliffe Memoirs Petro G. Grigorenko Translated by Thomas P. Whitney (Harvill Press £15) I n the years between 1967 and 1977 General Grigorenko was the most for- nudable...

Louis Heren Tumultuous Years Robert J. Donovan (Norton £13.95) I can think of no other American president who was savaged as much as Harry Truman. Andrew Johnson, who...

D avid Williams, who died last week aged 73, will be much missed in the Spec- tator offices. Every week or two, he would shamble in to see if there was a book worth reviewing, a...

On the move Julie Kavanagh I n the Red Book (so called because it looks like a Covent Garden programme) the indispensable travel-performance- rehearsal-schedule-cum-Baedecker...

Peter Ackroyd will resume his cinema column next week.

New York I n the late autumn of 1976 the senior Senator from Massachusetts arrived m Athens, Greece, accompanied by his usua l large entourage as well as his nephew, Joe. The...

Predictable Richard Ingrams M ichael Foot was due to appear on Pan- orama on Monday, the day on which Mrs Thatcher finally gave away the Election Date. The announcement came as...

Dear Diary Jeffrey Bernard I Was deeply disappointed that Hitler's diaries turned out to be fakes but I wasn't in the least surprised. He was far too u nstable, I thought, to...

On women P. J. Kavanagh I n an apparently authoritative article on the treatment of schizophrenia there was the following astonishing remark: ... the fact that women run a...

Jaspistos reports: Competitors were asked for riddles (with answers) in the same 1.0 :,_ 113 as 'Why is a raven like a writing-desk?, me bird and the domestic object varying...

No. 1269: Night thoughts Set by Jaspistos: At Grangewood School (the setting of the current West End PIO Daisy Pulls It Off) one of the subjects. for the Poetry Competition is...

Wonder women Raymond Keene Dia Cramling has dominated news about women's chess ever since her exploits at last year's Lloyds Bank Masters. During the Lucerne Olympiad even...

A prize of ten pounds will be awarded for the first correct solution Opened on 31 May. Entries to: Crossword 607, The Spectator, 56 Doughty Street, London WelN 2LL. 1...

T he Prime Minister put an end to tedious conjecture in the press by asking the Queen's permission to dissolve Parliament on Friday so that a general election may be held on 9...