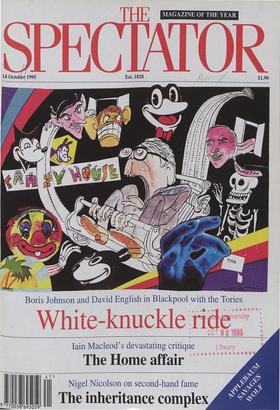 Rule Portillo. M r John Major, the Prime Minister, telephoned Mr Alan Howarth, a former education minister, who had suddenly decided to sit on the Labour benches in future; he...

How the Conservatives even now can turn the tables on Tony Blair AUBERON WAUGH But these whingeing headmasters should not suppose that their case is particular. Hatred of the...

THE LAST REFUGE OF DESPERATE MEN

Boris Johnson argues that the Tor), party's move to the Right is a confected illusion, which has fooled only Mr Alan Howarth Blackpool WHEN THE waistcoated young Portillistas...

Like it or not, only a mixture of American diplomacy and Croatian militarism will pacify the former Yugoslavia, says Robin Harris Zagreb ZAGREB in early October is full of...

Andrew Stephen investigates Louis Farrakhan, who has summoned a million of his fellow American blacks to march on Washington Washington I SOMETIMES shock my Washington friends...

THE PERILS OF NAOMI

Anne Applebaum is depressed by the self-obsession of modern feminists CLEARLY, this is a week for changing one's mind. Alan Howarth, the turncoat Tory did it, in a manner...

A QUESTION OF LOYALTY

Lord Home, the former Prime Minister; died this week. We reprint lain Macleod's expose of how Home was handed the keys to No 10 In October 1963 Harold Macmillan's...

Wilt of the week Phyllis Barbara LODGE, of The Bunga-

persist.. . I WAS called away from a crisis meeting last week to the casualty department. I was glad of the interruption, I must admit: there is a certain natural limit to...

IT WAS while he was sipping his lap- sang souchong that my husband was unfortunately interrupted by my excla- mation, `We've got it!' `Stop sounding like an excerpt from the...

PATRIOTISM IS NOT ENOUGH

Geoffrey Mulgan examines the tug-of-war over the Union Jack between John Major and Tony Blair NO ONE can remember when the Union Jack was last the site of a pitched battle...

SINCE General Eisenhower believes Hitler to be still alive, he had no doubt to avow the belief when asked a plain question on the subject, but he may be wrong. No one, I...

Jane Austen: not only a 'woman for the Nineties' but for the next government, too PAUL JOHNSON J ane Austen could well help Tony Blair to win the coming election. It may seem...

Sir: Charles Clover's article about the New- bury bypass (Prepare to be appalled', 30 September) is so crammed with errors and misconceptions that it is hard to know where to...

Sir: In your profile of Alastair Campbell (`Labour's real Mr Fixit', 30 September), your anonymous contributor claimed that when I was editor of the Daily Mirror, and on...

Sir: I would like to thank Lystra Riches (The great resources myth', 9 September) for his article, and for his recognition of the hard work that pupils at private schools put in...

Sir: Alasdair Palmer should pay more atten- tion when he watches the box. In his review of the Bernard Williams's The Making of Humanity (Books, 30 September) he refers to Bugs...

Sir: Taki tells us that the Greek people `were led by King George and John Metaxas to resist the Axis powers longer than France, Denmark, Holland and Bel- gium did' (High life,...

Sir: I was interested to read Charlotte Roe's article 'Adoption is never simple' (7 October). It helped me to understand what it must be like for a mother to give up her child...

Sir: Contrary to the impression given by Laurence Marks' article 'Rocking on its foundations' (Arts, 30 September), The Prince of Wales's Institute of Architecture is...

Sir: Charles Fyffe (Letters, 30 September) writes: 'Born 20 April 1889 in Vienna, he was christened Adolf.' Hitler was Austrian, but not Viennese. He was born in the Innviertel...

He has not lived in vain Bevis Hillier PALIMPSEST: A MEMOIR by Gore. Vidal Deutsch, £20, pp. 435 E ven when Peter Cook was alive, Gore Vidal was the person I most enjoyed...

Every day I pass a farm. From the train the hens are white The grass is green The tractor the colour of fire The blue of a worker's overalls A shade deeper Than the sky....

Putting up a black

More than a commentator

Paul Ferris WHY FREUD WAS WRONG: SIN, SCIENCE AND PSYCHOANALYSIS by Richard Webster HarperCollins, £25, pp. 673 H ostile critiques of Sigmund Freud are all the rage, and this...

The sound of a voice that is still at it

D. J. Taylor SABBATH'S THEATER by Philip Roth Cape, 175.99, pp. 451 R eaching the age of 60, an English novelist might nervously set about writing his memoirs or composing one...

But yet the pity of it, Hank

I'm reminded here of Eugenio Montale, Poet of the little felicities Of marriage and attendant sorrows, Marooned by these cliffs Listening to Delius. In light Like Venetian glass...

Plodders, second-raters and others

Raymond Carr HISTORIANS I HAVE KNOWN by A. L. Rowse Duckworth, £18.95, pp. 208 K en Dodd maintained that no amount of reading Freud and Bergson would explain what made a joke...

Alan Watkins MUGGERID GE: THE BIOGRAPHY by Richard Ingrams HarperCollins, £18, pp. 266 I f you assume, as the dating agencies do, that people of similar interests will have an...

But after the first shiver of disgust, we became aware of birds trafficking in the air, we saw the toothmarks of beaver: something was suddenly clean we had lost our dead skin....

M u sic Learning more from the notes Alexander Waugh explains the cultural insecurities which stop people enjoying classical music T here is no such thing as an unmusical...

A laugh a minute Marcus Berkmann f all the latest batch of comebacks so many ragged old pop stars make come- backs these days you begin to wish that some of them would just...

Perfect in every way Alistair McAlpine S otheby's has two sales this October which are of great interest to those who watch how prices move in the art market. The first one,...

Season of fruitfulness The critics GARDENS The number of gardens open to visitors falls off markedly in October but Kent remains fruitful territory. For example, Stoneacre,...

Roving eye Alan Judd T hose who know about case studies are rightly wary of submitting themselves. Nev- ertheless, my friend the biographer conced- ed that his car at least...

Too many pretty girls Jeffrey Bernard I think I may stop watching the television adaptation of Pride and Prejudice. Those endless balls are beginning to get on my tits and I...

There is only one man for me Carole Morin B etty the Maid is finally back from her binge around the mid-West with Wild John. 'I had the time of my life,' Betty said, wobbling...

Grand parents Nigel Nicolson W e were an assortment of strangers, linked by the chance that our parents were famous, and we were meeting under the chairmanship of Robert...

French is best Auberon Waugh B ombarded as we constantly are by colonial and New World chardonnays, we are in danger of forgetting what a delicate drink white burgundy can be....

Dine on fine finnan haddie A FINE selection of saints this week: Fran- cis Borgia, Bruno the Great of Cologne, dear St Wilfrid, son of a thane of Northum- bria, and his...

Lost chances Raymond Keene DURING THE COURSE of a BBC televi- sion preview of the world championship around a month ago, I predicted that Kasparov would defeat Anand overall...

A first prize of £25 and a bottle of Graham's Late Bottled Vintage 1989 Port for the first correct solution opened on 30 October, with two runners-up prizes of £15 (or, for UK...

Cricket's e.e. cummings Simon Barnes THE FIRST task, on returning to your desk after a fortnight's absence, is to burrow down until you get to the wooden part of it. The...

Dear Mary.. . Q. I have a friend who likes to hedge his bets with regard to social life, preferring never to commit himself for fear of missing out on a better invitation....