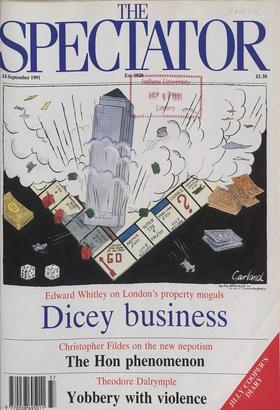 T HE Conservative Party attempted to dampen speculation that a general election might be held in November. Polls con- tinued to show a Conservative lead. Nissan in Sunderland...

Mr Ashdown and friends are suffering from a surfeit of small ideas NOEL MALCOLM You notice the distinctive qualities of the ancient Liberal civilisation the moment you enter...

JILLY COOPER M y idea of hell is judging the fancy dress at the Bisley Flower Show. I cannot bear to see those little black-corked upper lips trembling. Happily this year there...

Is hanging too good for Mr Murdoch's underclass? AUBERON WAUGH Or so we read in the tabloids. I always liked to think that these vindictive and mer- cenary sentiments were put...

Edward Whitley reveals the real life game of Monopoly being played out in London's furthest reaches IF THE Monopoly board were updated, where would Carnary Wharf go? Geo-...

THE death of Mr. Charles Jamrach, which took place on Sunday, leaves a vacancy in one of the most curious occupations in the country. "The wild- beast man", as he was sometimes...

John Simpson regrets that the dissident did not live to see this day Moscow THIRTEEN years seemed to have made no difference whatever to Yegor, except for a wispy moustache...

Anne Applebaum argues that the Lithuanians have not realised how much they will miss Russian largesse Vilnius CURLED RIBBONS of barbed wire still lie in rows beside the...

A reader received the following letter: Dear Sir, Iâ¢ was able to collect your address through a friend who imports goods from your country. He told me you are a trustworthy...

AN EMBARRASSMENT OF CANDIDATES

Sandra Barwick on how John Browne MP refuses to lie in his grave THERE can be little doubt that Conserva- tive Central Office wishes the whole sub- ject of John Ernest Douglas...

persist... NOW THAT this year's rioting season has opened with performances in Oxford, Birmingham and Newcastle, it is surely time for a dispassionate and scientific enquiry...

The second half of Dr Dalrymple's 'If symptoms persist' last

week should have come first. The column should have started at the paragraph beginning 'In the course of my brilliant career.' We apologise for our error. As the piece was about...

Dominique Jackson on how recession has hit the oldest profession AT THREE THIRTY on a sunny after- noon only the distant rattle of the District line disturbs the tranquillity...

Ray Honeyford on why a High Court ruling could destroy a national institution BISHOP Challoner School in Stepney is a Roman Catholic girls' school. It has volun- tary status....

A tale of sermons, stones and dead cats PAUL JOHNSON T he Church of England's current bout of odium theologicum is in danger of slip- ping over into something good Anglicans,...

The Hon also rises big business where nothing succeeds like successors CHR I STOPHER FILD ES Y ou would expect to find Mitford girls in the Hons' cupboard, but it is not the...

I WORRY about this Honnery. Dynasties have their place in business life â you expect to find Rothschilds at Rothschild and Hambros at Hambros, and there are enough of them to...

MR YELTSIN'S men read City and Sub- urban. I was arguing last week that Tom King has gone to the wrong shop. Instead of buying a bespoke tank from Vickers, he should go for the...

GEC, though, has let time go by and left the succession open while the Hon. Simon has been given the chance to train on. That has a touch of the British electrical industry as...

Sir: A little over a year ago, you published an article on Christian Aid. At the time, I visited Christian Aid to discuss a political murder involving organisations they fund....

saying that those who reject the Papacy's teachings on birth con- trol have failed to provide any evidence that contraception is morally justified. It is this kind of...

Sir: How sad that John Simpson (17 August) should join President Bush and our own unctuous Foreign Office in rub- bishing General Aoun for his 'mindless campaign to destabilise...

Sir: William Cash (7 September) is proba- bly broadly right in implying that the Catholic Church's objections to 'artificial' contraception are increasingly ignored by the...

Sir: Joanna Coles (31 August) could have saved herself a lot of trouble, and space in your journal for matters of greater sub- stance, if she had agreed to the conductor's...

Sir: Why, if there is supposed to be such a shortage of food in Russia, are most of the people queueing up for it so fat? Ruth Milner 40 Milford Street, Salisbury

Sir: The collapse of communism in Russia â where does that leave Burgess and Maclean and Blunt, who made such sacri- fices for it (if their expenses were paid)? Still more,...

Always a political being Anthony Quinton A LIFE AT THE CENTRE by Roy Jenkins Macmillan, Â£20.00 pp.658 R oy Jenkins has written a number of excellent political biographies,...

Come to spy out the land?

Right from the start

Charles I was the problem

Pretty bubbles in the air

Francis King A LANDING ON THE SUN by Michael Frayn Viking, f14.99, pp. 249 S ince Harold Wilson was as full of gimmicky wheezes as a freshly poured Pepsi of bubbles, it is in...

motored homeward with the crowd That sits on tails and queues up hills When all at once, â I cried aloud Another slab of daffodils; Despite the salt, beneath the trees,...

Trouble with the rates

Death and corruption in Bath

This bodice is not for ripping

Anne Chisholm WALLIS: THE NOVEL by Anne Edwards Macmillan, Â£14.99, pp. 480 I t must have seemed such a foolproof idea; to rewrite the love story of the century, the tale of...

Programmed to please Peter Phillips programme. It is perhaps remarkable that such a thing ever happens, given that top star soloists have their repertorical patch for the...

Clarissa raped again Robin Lee on the BBC's travesty of an English classic his winter the BBC will be screening its Â£2 million adaptation of Clarissa, with Saskia Wickham in...

Nota bene Ursula Buchan My first reaction was to suspect it of apomixis â the capacity to reproduce asex- ually. I used to think that this propensity was confined to...

Mrs T and sympathy Martyn Harris I did not learn a great deal that was new from Thatcher: The Final Days (ITV, 9 p.m., Wednesday), but it was not nearly so dire as preview...

Plane tales Taki Olympic Airways continues to be by far the worst airline in Europe, although the gov- ernment is trying its best to get rid of the fat accumulated during the...

The Aqua Scribe is available from Hawkins and Manwaring, Westborough,

Rice with everything Jeffrey Bernard A t long last the Westminster Hospital has fixed me up with some home help. The said help is a very pleasant woman, origi- nally from...

Down on the farm Zenga Longmore W henever the city seems grimmest, beset by concrete and car fumes, a whole- some whiff of pig reveals that city farmers are at work nearby....

I HAVE just returned from the splendid wedding in the depths of Shropshire of that wild hunting man Rory Knight Bruce to the enchanting grotto-builder Belinda Eade. A perfect...

Various shades of red Auberon Waugh The last offer was memorable for a won- derful Gigondas 1989, here repeatedÂ° and two brilliant Beaujolais of which one, the Brouilly...

Baltic bonanza Rayrriond Keene I t is a happy coincidence that just as Latvia has regained its independence Olms, the prestigious Swiss-based chess publishers, have reprinted...

A first prize of Â£20 and two further prizes of Â£10 (or, for UK solvers, a Copy of Chambers English Dictionary â ring the word `Dictionary') for the first three correct...

You are invited to compose a sonnet (any type) whose first line is either 'A shilling life will give you all the facts' or 'He grasped the cosmic oyster while it gaped'. Entries...

Prime target Frank Keating WITHOUT ceremony, the new committee suddenly dropped Michael Parkinson's name from the World XI which played at Scarborough this year, even though...

Q. I have a problem with my daily. She started a month ago, supposedly comes on Tuesdays and Thursdays, but each time she seems to do less work than the time before. The e...