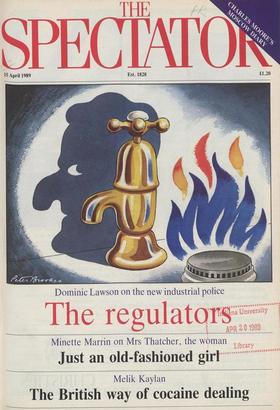 The Battle of Britain II A midst considerable ballyhoo Mr Gorbachev visited Britain; his invitation to the Queen to visit the Soviet Union was accepted 'in due course'. The...

SPECT Thff AT OR

The Lord Chancellor who dared to cross the Bar NOEL MALCOLM Sunset and evening star, And one clear call for me! And may there be no moaning of the Bar, When I put out to sea,...

CHARLES MOORE t is 30 years ago this week that British European Airways, as it then was, opened its first service to Moscow. On board the first Viscount to arrive in Moscow was...

Homage from Rioja, or travels with my cousin Raymond AUBERON WAUGH n Tuesday of this week, Sir 0 Raymond Carr celebrated his 70th birth- day. That would of itself be...

TRIBUNES OF THE PEOPLE

The privatised utilities are being given orders by a protection is not extended to the public sector SIR Bryan Carsberg, the director general of Oftel, was just about to tell...

James de Candole experiences the police-ridden poverty of life in Rumania TWENTY-FOUR hours after arriving in Rumania, I was told to leave. The Sicur- itatea, Rumania's secret...

LIFESTYLE: This is something that happens in magazines, rather than peo- ple's lives. What it all means is that you can buy a certain ensemble of home furnishings, scents,...

Minette Marrin examines the use Mrs Thatcher has made of her gender TRYING to have things both ways, com- monly ascribed to women, is much more typical of politicians. Either...

Michael Lewis wonders if publishers have gone mad in their expansive mood I RECEIVED my first fat book contract a year ago and I still wonder whether it represents a shrewd...

Melik Kaylan meets a pedlar of drugs by appointment to City folk VISITING London these days I am always dismayed by how insular and parochial it seems, how silly and...

Outsiders: a profile of Peter Walker, detached Cabinet minister NO Enigma Machine was necessary to break the code in Peter Walker's address on Monday evening to the Tory...

THE Daily Telegraph of Friday pub- lishes a paper on the practice of dyeing hair which throws the oddest light upon some difficulties in the way of getting a living. It appears...

The media: Paul Johnson wants the privacy issue broadened THE British press has rarely if ever been held in lower esteem by the community. It systematically invades privacy....

Scheme in the dock

THE Government's talent-spotters must surely have their eye on David Davis, MP for Boothferry on the Humber, where dockside follies can be observed at first hand. Last year in...

HIGH comedy in the House of Lords, as Lord Keith of Kinkel, like some stern Scottish judicial nanny, asks Master Tiny if he has come into court with clean hands. She should know...

Nigel faces the inquisitors, with inflation as judge and jury CHRISTOPHER FILDES W e hang around in Westminster Hall like members of the Long Parliament, waiting to see some...

THIS week's inflation figure, we know, will mark the top of the cycle, which will start rolling down again to six per cent or so by the year end, but these numbers are heavily...

THE man who first warned us of inflation's return has come back to the City. This is Tim Congdon, for long the economic sage of brokers Messel. Nigel Lawson says (and was saying...

Inflated notions Sir: Noel Malcolm's article on inflationary expectations (Politics, 1 April) is welcome, and expresses a view which is overdue for recognition. It is hard to...

Sir: Roy Jenkins was not the first to experience 'Europe' as a religion (Books, 11 March). It began that way. In April 1962 Roy Jenkins persuaded a reluctant Gaitskell to meet...

Sir: I cannot resist adding my mite to the avalanche you have invited by publishing (1 April) James Michie on manners (not eti- quette, as your cover misleadingly suggests). He...

Sir: You say that I should have published the leaked DTI report 'at the first oppor- tunity — on Sunday 26 March' (Leading article, 8 April). But I didn't receive a copy of the...

Sir: Your Portrait of the week (1 April) gives credence to a popular fallacy: that the Soviet elections were a defeat for the Communist Party. They were not; the Soviet Union is...

'CAN YOU DRAW PROPERLY IF YOU WANT TO?'

NICHOLAS GARLAND C artoonists are not always comical in daily life — but I know two who are. Michael Heath and David Austin both sprinkle their conversation with dry one-...

In next week's Spectator SCOTTISH SPECIAL Poaching Scotland and Europe

The mask beneath the mask Bevis Hillier THE LIFE OF GRAHAM GREENE: VOLUME ONE 1904-1939 by Norman Sherry Jonathan Cape, f16.95, pp.783 T he backlash against the two-volume...

Matthew Parris ONE OF US by Hugo Young Macmillan, f16.95, pp.579 0 n deciding to leave Parliament I called on Mrs Thatcher to say — well 'Thank you and goodbye', I suppose....

This book is dangerous, it must be banned. It names names and states addresses, it reveals careers and important positions, lists antecendents and marriages (potential for...

Harriet Waugh T he reader is warned by the cover of Ruth Rendell's new psychological novel, The Bridesmaid, that he is in for a gruesomely disturing time. It shows the head and...

The slow, black bell seems still to nod, its shadow Trembles in the gloom, a musky perfume Faint in the ear and mingling with the sweet Blue smoky exequies and far receding chop...

Fragments of a national epic

Truth and the Temples

Mark Archer INSIDE THE BROTHERHOOD: FURTHER SECRETS OF THE FREEMASONS by Martin Short Grafton Books, £14.95, pp.531 THE TEMPLE AND THE LODGE by Michael Baigent and Richard...

Sculpture Makonde: Wooden Sculpture from East Africa (Museum of Modern Art, Oxford, till 21 May, and touring) Out of Africa Tanya Harrod C ontemporary African artists have...

Ivanov (Strand) Tender mists dispelled Christopher Edwards H ere is Chekhov in a new guise. Not everyone will approve. Neither production nor text reflects the _ favoured...

Patty Hearst (`18', Metro) Daughter of the revolution Hilary Mantel P aul Schrader's film begins with a mon- tage of family snapshots and a background of hoarse,...

World weary Marcus Berkmann T he world music bandwagon rolls on. So far, to be honest, I have not seen any rousing popular support for the whole idea, beyond the usual coterie...

Well timed Wendy Cope I t surprises and pleases me to learn that some readers take this column seriously enough to allow it to influence their viewing habits. The first...

Riding for a fall Taki Poor Sebastian. Watching the lower middle class get rich must be as painful for him as passing a kidney stone. I watched him looking mournful later on...

Button- Jeffrey Bernard L ast week I was astonished to read that Brigham Young had 55 wives. He must have been mad. Did he manage, I wonder, to call them all by their right...

Obstacle course Alice Thomas Ellis I am going, as it were, to write on the pavements of Camden Town. Our neigh- bour once did this literally — she used to sit down and spell...

A to E Jaspistos I n Competition No. 1569 you were in- vited to produce a piece of plausible prose in which every word begins with one of the first five letters of the...

Nigel's interest Raymond Keene N igel Short has the chance of his life in the Barcelona World Cup. Kasparov has been off form, and with a burst of four wins at the midway...

The Park Room WHEN you think of an Italian restaurant you think of somewhere small, cosy and bustlingly intimate, somewhere precisely at the other end of the spectrum from the...

write a poet-laureatish poem (maximum 16 lines) in celebration of the Queen's forthcoming visit to Moscow. Style need not be contemporary. Entries to 'Competition No. 1572' by...