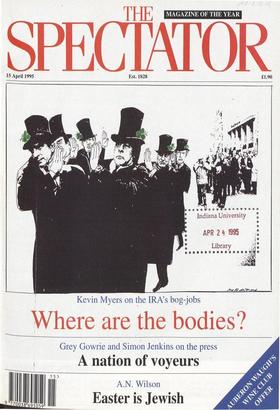 M r Jonathan Aitken, the Chief Secre- tary to the Treasury, said that the Guardian had published 'wicked lies' about his busi- ness interests and friendships with Arabs; he also...

GREY GOWRIE W ile cooking lunch for friends and family, I listened to The World This Week- end in bewilderment. As if announcing out- break of war, or the death of a sovereign,...

A word in the ear of a dirty old man AUBERON WAUGH I t used to be a stock response of the Aus- tralian radical thinker John Pilger, when he was criticised for producing...

LET THE BOGS RELEASE THEIR SECRETS

Kevin Myers calls on Sinn Fein-IRA to mark this Easter by telling families where the bodies of their murdered loved ones are buried Dublin THIS EASTER, like every Easter, Sinn...

SOME UPDATES and bits and pieces. False etymologies: a reader proposes that 'silk purse from a sow's ear' derives from the French word for a shoulder- bag souziere. A likely...

LEFT OR RIGHT, PETE'S YOUR MAN

Andrew Stephen on the extraordinary political flexibility of 'Pete' Wilson, who is soon to declare his candidacy for the Republican nomination Los Angeles BOB DOLE, to general...

persist. . . WHEN MY father died recently, I found among his effects some of the school- books he had used three-quarters of a century ago. He was born in a slum and grew up in...

ORIGINS OF THE EMPTY TOMB

To believe in the Resurrection, we have to accept the Jewish thought-processes which gave birth to the concept, argues A.N. Wilson THE SAD SCENES at the Montefiore cemetery,...

SPOCK OF THE VALLEYS

John Redwood is the brainiest man in the Cabinet. Boris Johnson attempts to find out what he actually thinks IT IS SAID that the Tories need a man without taint. They need a...

Wirt of the week

THE LAW IS A SNAIL

Alun Jones QC argues that, if we restored capital punishment, the delays in execution would emulate America's OF COURSE, it couldn't happen here. Supporters and opponents of...

THE Japanese are exceedingly clever. They understand European opinion, especially the baser side of it, as well as they understand the art of mobilisation, and the terms they...

WATCH OUT, THERE'S A GRANNY ABOUT

Tabitha Troughton is fed up with the popular portrayal of old people as victims. Sometimes they are violent aggressors OVER THE last six months, six of my friends in London...

Collapse of stout parti amid the statues of the Luxembourg PAUL JOHNSON yone whose stomach churns at what the French culture ministry has done to the Louvre, now turned into a...

It's a nice tunnel, but where were the trains? Sorry, guy, we couldn't get the parts CHRISTOPHER FILDES T Brunel or Stephenson, digging the hole was the hard bit. Your...

Sir: Mr Peter Lyons' letter (18 March) about his meeting with and his appreciation of Sir Patrick Mayhew's qualities was, to me, very interesting. I have long thought that Sir...

Sir: Mr Oddie appears to have an obsession for attacking the Church of England; he must undermine the Church of which he was once a member ('Hard Church times', 11 March). He...

Sir: Echoing the Pope again, Paul Johnson regards the sanctity of human life as an eternal absolute, and he counts abortions in modern Britain on the same scale as adult...

Sir: Swift retribution can be expected when professional conmen believe they have been conned (`Getting away with it', 1 April). My fellow crooks and fraudsters at Ford Open...

Sir: Boris Johnson (Politics, 8 April) raises an interesting comparison between the electorate and a man in an hypoglycaemic coma, to whom the Government is going to give...

Sir: The editor of Today responds to your article (`Bankrupting Britain over break- fast', 1 April) covering the Social Market foundation's study of the public spending Implied...

So it is true Sir: With regard to your recent

correspon- dence concerning penis size — and race — I feel my own experience might be of inter- est. A few years ago I spent a month in Brixton Jail. At the time Brixton was...

What of Lord Gowrie?

Sir: Lord Gowrie's spell as your Diarist cre- ates a savoury juxtaposition, appearing as he does just a few pages from where the admirably relentless Giles Auty regularly blasts...

Sir: I'm afraid that Grey Gowrie is mistak- en (Diary, 8 April). Feelgood is not synony- mous with 'jelly soil', or any other part of the body; it only occurs as part of the...

The old jokes are not the best jokes Bevis Hillier THE OXFORD DICTIONARY OF HUMOROUS QUOTATIONS • edited by Ned Sherrin OUP, £15.99, pp. 543 F or 12 years I lived above...

I slipped out of the laundered day and left it there, Hanging outside the great glass doors to air, Walked down long corridors that smelt of meals Or ghostfbf meals, past...

Barry Unsworth BORDERLINERS by Peter Hoeg Harvill, £15.99, £9.99, pp. 251 I don't know if there are many people who really think, when they look back at things, that schooldays...

It must have been the way he told them

John Campbell AS IT SEEMED TO ME by John Cole Weidenfeld & Nicolson, £20, pp. 480 J ohn Cole's Ulster accent was a shock to metropolitan ears when he became the BBC's...

What puzzles me about the Resurrection of the Dead Is why the souls in Heaven require it: if it's good Without the body on why ask it back? Does it prove Hoaven feels the...

Smiting the enemy with effect

Jazz Rhythm on the road Martin Gayford enjoys the bossa nova, a 1960s fad that never went away A few years ago, I made a discovery about jazz and driving. At that time we had...

From Here (Waddington Galleries and Karsten Schubert, till 29 April) Edge of the black hole Giles Auty W hen Britain's best-known dealer in modern art and one of our...

Thyme to bow out Ursula Buchan I like to see myself as a regular kind of a girl, mainstream and uncontroversial in my opinions and amiable in my approach. I am the sort who...

An insomniac's dream Alistair McAlpine T here can be few achievements of mankind as civilised as founding a great library but few moments as sad for a collec- tor as when its...

Teasing an amputee Jeffrey Bernard I have been feeling very low recently about my missing leg. When I dream, I still have it, although it is now 14 months since it was cut...

Going up in a puff of smoke Taki s the Queen Mother's favourite poet said, 'April is the cruellest month,' especially for smokers in New York. At 12.01 last Monday morning...

Dog days Nigel Nicolson 0 nly once have I hated an animal. I was spending a night in an isolated cottage that had not be inhabited for several months, and was woken up by a...

Turning round the enemy Holly Budd P olitics in the wider national sense fea- ture only occasionally in the office, which suits both my own brand of political qui- etism and...

A RECENT survey of what children aged one and a half to four and a half ate found that they were eating all the wrong things. 'Wrong', that is, according to current dietary...

Lead astray Andrew Robson T he most crucial card the defence has to play is the opening lead. It is said that over half of all contracts that start life in the balance are...

The price is right Auberon Waugh S everal times in the past ten years I have chanced upon a particular Eldridge Pope wine — the spectacular 1989 Savennieres Papillon from...

Plus ca change . Raymond Keene NOW CONSIDER THIS: 'That the cham- pionship should be the private property of the champion is anomalous enough; it is a greater anomaly that it...

A first prize of £25 and a bottle of Graham's Malvedos 1979 Vintage Port for the first correct solution opened on I May, with two runners-up prizes of £15 (or, for UK solvers,...

Cricket's annual treat Frank Keating THE PRICE of Wisden has doubled in just ten years (to a hefty £23.50), but the pub- lishers know their spring onions with a trea- sured...

Dear Mary. . . Q. When at parties, how can I avoid getting involved in a long and tedious conversation With a man I know who is a frightful bore? A.B., London W8 A. The moment...