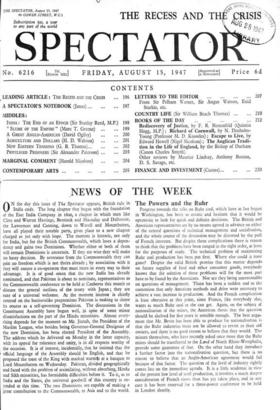 The Powers and the Ruhr

Progress towards the talks on Ruhr coal, which have at last begun in Washington, has been so erratic and hesitant that it would be optimistic to look for quick and definite...

O N the day this issue of The Spectator appears, British rule in India ends. The long chapter that began with the foundation of the East India Company in r600, a chapter in...

Reactions throughout the United States to Britain's economic crisis have been confused. As might have been expected, the representa- tives of the various sections of public...

Tuesday's discussion of Palestine in the Commons provided a quiet ending to the dangerous disturbance of public opinion which began with the murder of the two British sergeants...

Limits of the Paris Conference

The next stage in the European economic conference is the welding of the completed questionnaires provided by the sixteen member nations into a unified statement of joint...

It is right that supporters of the United Nations should be kept in as good heart as facts permit. The Secretary-General, in drafting his second annual report, has clearly had...

Films Take the Cut The decision to impose a duty

of 30o per cent. ad valorem on the earnings of imported films provides a pretty comprehensive example of the dangers of an unduly belated, and therefore over-hasty, attack on...

The Reports of the Select Committee on Estimates are far more interesting to the general public than their general title would seem to imply, and the latest, which concerns...

T HE pace and heat, in every sense, of business in no way diminished as the present series of sittings came into its final spr int. A heavy programme, a heavy atmosphere, and a...

THE RECESS AND THE CRISIS

A S the economic crisis moves to its climax Parliament adjourns —the House of Commons for nine and a half weeks, while the Lords, with far more wisdom and public spirit, are to...

A SPECTATOR'S NOTEBOOK I HEARD the beginning of the Prime Minister's

speech on Sunday night, and for some reason woke up in time to hear the end of it as well. That is not necessarily a depreciation of the speech. Other orators have had the same...

The death of General Denikin carries the mind back to

the old, confused, half-forgotten Russian conflicts that filled the first year or two after the revolutions of 1917, and were rather largely mis- represented by the...

Tuesday's debate on the refusal of the Editor and Lobby

Cor- respondent of the Evening News to answer a question put to them by the Committee of Privileges regarding the identity of an M.P. who had given the paper information raised...

Awhile, which comes to me each year, always inspires a certain exhilarating holiday feeling, even if I have just had a holiday. This time the pages are rather more closely...

One of the few drawbacks to flying is that on

a journey of five or six hundred miles as much time is wasted in preliminaries and sequels as is spent in the air. To get to Geneva takes about two hours and a half flying-time...

By MARC T. GREENE T HE plan for a federation that shall unite the British West Indian possessions economically as well as politically in a Dominion form of government appears...

By DAVID OGILVY O N May 6th, 1884, Judah Benjamin died in Paris at his wife's house in the Avenue d'Iona. In his seventy-three years he had contrived to complete two careers:...

By H. D. WALSTON O N several occasions recently the Chancellor of the Exchequer has referred to agriculture as the great dollar-saver. Following this, suggestions have been...

By G. B. THOMAS S INCE Secretary Marshall made his speech at Harvard on June 5th about European reconstruction the Soviet grip on Eastern Europe has steadily tightened. There...

By SIR ALEXANDER PATERSON T HE Home Secretary has recently visited the most modern insti- tution for adolescent delinquent girls. When Parliament passed the Prevention of Crime...

LISTENING IN THE BITTER NIGHT

By HAROLD NICOLSON I HAVE been visiting this week some of the National Trust properties in Western and South-Western England. I fear that the public do not rightly understand...

HAVING no love for my fellow-man, my gratitude knows no bounds that I have at last been initiated into the rites and mysteries of a holiday camp without having to go to one, and...

THE THEATRE AT a time when spivs and gunmen's molls are rampaging behind some of the brightest of London's footlights and when comedies mis-fire right and left, Shakespeare has...

No aspect of radio has provoked more discussion than the broad- casting of poetry. Most of the arguments centre round the problem of how poetry should be presented on the air....

THERE was a time not so very long ago in Paris when a small group of enthusiasts used to rise en bloc at the beginning of a concerto and register a formal protest. " Down with...

IN London the roadmenders come out in force, the House goes into recess, and the summer shows are with us again. Fame and Promise are returned to their summer residence in...

LABOUR'S CRISIS Sta,—Your leading article on this subject is challenging, but surely you are mistaken in saying that the present Labour leaders " do not under- stand what the...

Sm,—Among the gloomy items of current news the announcement that America is to stop sending films to Britain shines as a good deed in a naughty world! As I recall the hours of...

BOARDING SCHOOLS AND THE L.C.C.

Sut,—Sir Ernest Graham-Little's letter in your issue of July 25th under the above heading hardly gives the London County Council the credit it deserves for its prompt action in...

Sue,—Heaven forbid that I should take up the cudgels in defence of contemporary academic research, for I have frequently declared that a new Renaissance was sorely needed to...

AT THE PUBLIC EXPENSE

SIR,—The recent question and answer in Parliament regarding the cost of hospitality and entertainment by Members of the Government prompts the query as to whether the Accountant...

Sta,—I read with interest Mr. Pope-Hennessy's record of his three days in Torquay, published in your issue of August 1st, but I cannot admire the querulous spirit in which he...

Snt,—Having just returned from a delightful three weeks in Switzerland I have read with the greatest pleasure Mr. Warren Postbridge's article and agree with every word of it....

Snt,—In the Spectator's Notebook last week I wrote: " When I hear people grizzling because they are afraid they will never get abroad again I cannot help remembering that a few...

WASTE ON THE FARMS

Snt,—In The Spectator for August 8th Mr. Caton asks us to sympathise with the farmers whose sheds are full of totting cabbages which they cannot sell. When I buy a cabbage I am...

A letter with which I profoundly agree has reached me from a Rectory in North Ireland. " Some months ago a talk on the subject of rooks was broadcast which suggested that,...

Deer and Fox Different animals rely, of course, on different

senses for their preserva- tion, and this master sense may react to a pitch of scarcely credible acuteness. All the tribe of deer, I think, owe much to intensely sensitive ears....

Local Sanctuaries A question which the authors and begetters of

the national parks have not faced, or at least have not acknowledged, is how are existing owners of sanctuaries to be treated? Now the really remarkable success of the 7...

THE ARMY AND CITIZENSHIP

Sta,—The V.D. figures for the army, to which Lord . Moran drew atten- tion in his article last week, will, I fear, come as no surprise to those who remember the period of the...

ONE of the results of a paucity of labourers in the harvest field, here and there at any rate, is that a very great deal of grain is left on the stubble. The rakings are wholly...

In My Garden A question with which both professional critics

and amateur experiment, is how to cover or qualify the bareness of the earth about the bedded roses. Among those who used a complete carpet, both for comeliness and the good of...

Richard of Cornwall. By N. Denholm-Young. (Basil Blackwell. 15s.) LESS than six months after the appearance of Sir Maurice Powicke's massive study of Henry III and his times we...

In Pursuit of an Ideal Rediscovery of Justice. By F. R. Bienenfeld. (Allen and Unwin. 15s.) Luce the little group of Athenian friends who went down to Peiraeus at the end of...

Edinburgh. By G. Scott-Moncrieff. (Batsford. 15s.) MR. GEORGE SCOTT-MoNcatEFF's Edinburgh is an exceedingly sensi- tive and competent survey of the history of Scotland's...

The Anglican Tradition in the Life of England. By A. T. P. Williams, Bishop of Durham. (S.C.M. Press. 6s.) MODESTLY intended as a companion volume to The Free Church Tradition...

THE first venture of a highly successful painter into the field of creative writing is bound to arouse a great deal of interest. What view of life, one wonders in the case of...

Letters from Skokholm. By R. M. Lockley. (Dent. 15s.) THE Letters by Mr. R. M. Lockley, who has written .much on Skokholm before, are addressed to his brother-in-law while a...

Drummond. 8s. 6d.) THE theme of this fourth issue of Transformation is "the power within us "—the title of a book on Nufiez Cabeza de Vaca, a sixteenth- century Spanish...

THE text of Now Barabbas, William Douglas Home's play of prison life, which has had such a deserved success during its run in London, is being published in a few days' time by...

PROFESSOR BICKERSTETH suggests that Lear has more meaning for us than for an age which knew not Himmler, Belsen and Nuremberg. He analyses with subtle erudition the total effect...

By CUSTOS ANYONE who hoped or feared that the Government, having belatedly acknowledged that a crisis existed, would take really drastic steps to meet it must now be feeling...

to place a firm order with their newsagent or to take out a subsctiption. Newsagents cannot afford to take the risk of carrying stock, as unsold copies are non-return- ' able....

SOLUTION TO CROSSWORD No. 436

TA Book Token for one guinea will be awarded to the sender of the first correct so lution of this week's crossword to be opened after noon on Tuesday week August 26th. Envelopes...