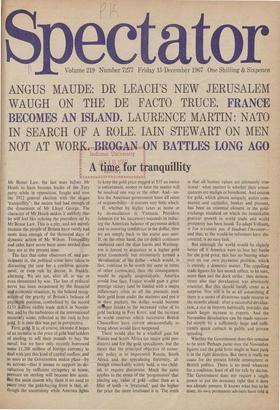 Bonar Law, the last man before Mr Heath to have become leader of the Tory party while in opposition, fought and won the 1922 general election with the slogan `tranquillity': the...

From Stansted to Bloomsbury

Twice this week- Parliament has found itself debating horrifying encroachments upon the decencies and safeguards with which public business has normally been conducted in this...

Like distressed gentlefolk fallen on hard times we respond to every setback in the present by retreating further into the past. The Foreign Office's latest thoughts about a...

The tong-awaited storm broke in Greece. King Constantine broadcast an appeal to the Greek people to help him restore democracy and free- . dom. 'There will be ,no compromise,'...

POLITICAL COMMENTARY AUBERON WAUGH Mr Heath made it clear, in his Parliamentary Press Gallery speech on Wednesday, that he is not the slightest bit interested in Mr Duncan...

CHRISTOPHER HOLLIS The world is so full of a number of things, I'm sure I would love to be Provost of King's. In a hundred years' time, the good Provost has said, All family...

MARC ULLMANN Paris—As the six member-governments of the European Community prepare for their grand confrontation in Brussels next week there is no gainsaying the fact that the...

AMERICA MURRAY KEMPTON New York—Mr Arthur Goldberg seems to have told Mr Johnson that• he wants to depart as the United States Ambassador to the United Nations. This would take...

Nato in search of a 1 ole

DEFENCE LAURENCE MARTIN What can be done with a military alliance when the threat it was created to meet has receded almost out of sight? NATO has been unsuccess- fully seeking...

From the 'Spectator, 14 December 1867—The talk of the week in home politics has been still of Fenians. The notion of funeral processions in honour of the "Manchester Martyrs"...

J. W. M. THOMPSON For so shrewd a person, Lord Robens can utter the most surprising nonsense at times. Perhaps he is angling for an invitation to de- liver next year's Reith...

PERSONAL COLUMN ANGUS MAUDE My wife put her head round my study door one Sunday evening not so long ago and said, in a voice vibrant with indignation, 'You must come and...

MEDICINE JOHN ROWAN WILSON The surgeons are really having the best of it these days. It is hard to remember any form of medical activity which has attracted so much public...

Wish you were here

THE PRESS-1 DONALD McLACHLAN - Had you heard of the 'unknown island' of 1'orto Santo, north of Madeira, where 'the boats are somewhat irregular'? Did you know of its...

THE PRESS-2 TIBOR SZAMUELY The popular idea of an international journalists' get-together is that of an assemblage of hard- bitten, hard-drinking, cynical pressmen swop- ping...

TABLE TALK DENIS BROGAN Pondering the apparently insoluble problems of British Railways, I wonder whether anything of the bad morale which is visible in many ranks of the...

CONSUMING INTEREST LESLIE ADRIAN At about the same time as Mrs Donoghue found a decomposing snail in her ginger-beer bottle in Paisley, I discovered a cockroach under my Dover...

JOCK BRUCE-GARDYNE It is the custom of General de Gaulle to give public expression to thoughts of his contem- poraries which they consider unmentionable: and in so doing, to...

Homely humbug JO GRIMOND, MP 'While Labour supporters and Liberals were given to understand that small beginnings pre- saged more impressive developments in the future,...

ANTHONY BURGESS The Oxford Companion to the Theatre third edition edited by Phyllis Hartnoll (oue 75s) I bought the 1957 edition of Phyllis Hartnolf's admirable• guide when I...

Yes, I have no suspenders

HENRY TUBE In writing of Malcolm Muggeridge it is some- how obligatory to find the key to him. As a public figure he gives such a stron g impression of havin g been wound up...

GEOFFREY McDERMOTT The Zinoviev Letter Lewis Chester, Stephen Fay and Hugo Young (Heinemann 30s) It can't happen here, we say. Then, when it does, well it can't happen again...

TAYA ZINKIN Too Much to Tell Molly Huggins (Heine- mann 45s) Lady Huggins has written a most readable autobiography. The beginning, about her child- hood in Scotland surrounded...

The Groucho Letters Letters from and to Groucho Marx (Michael Joseph 30s). 'I believe the emphasis on popcorn and other noise- making foods has helped to drive many people away...

Whoops with a vengeance ARTS

HILARY SPURLING This time last year there was a mood of un- doubted confidence abroad in the West End: courage, a certain panache and an atmosphere of cut-throat competition in...

ART BRYAN ROBERTSON There is a danger these days of allowing one- self to be brainwashed by the inexorable force of the zeitgeist, as it shows itself in art every five or six...

CHRISTOPHER FILDES The City of London is threatened with its most damaging failures since the end of the war. The commodity markets are faced with a loss of some £30 million,...

Confidence crisis in the City MONEY

NICHOLAS DAVENPORT In all my experience of City politics, which covers the 1931 financial crisis as well as 1949, I have never known such a profound distrust of—such a strong...

Danger — men not at work

BUSINESS VIEWPOINT IAIN STEWART lain Stewart is chairman of Fairfields, the Glasgow shipbuilding company, having been appointed at the time of the reorganisation in which the...

PORTFOLIO JOHN BULL One aspect of my post-devaluation policy is to add capital goods producers to my port- folio. Recent economic forecasts have shown that this sector should...

It must dishearten Mr Jenkins and Sir Leslie O'Brien to see British government stock still so friendless. An 8 per cent Bank rate and repres- sive measures at home look like the...

ADVERTISING ROGER PEMBERTON One consequence of the GEC/AEI takeover battle was an adjournment debate on the whole affair in the House of Commons. This debate pro- vided a field...

Sir: Marjorie Jones asks (Letters, 8 December) when, where, and by what means did the general public ever sit in court; the three answers, as every historian knows, are: in...

He should visit the casualty department at a large hospital and some road accidents with the police during the hours 10 p.m. to 2 a.m. He would then see the handiwork of some...

Living with the veto -

Sir: May we support your definition (Letters, 8 December) of the reason why Britain's apparent efforts to join Europe have ended in failure? Britain has, as you pointed out,...

Sir: For such a wealthy and extremely able man as Mr Leonard Cottrell to write so irresponsible a letter (8 December) is almost incomprehensible. Does he not realise that this...

Sir: So Lord Chorley is to introduce a Bill to 'keep vice off the streets.' When, oh when, will our Puritans leave this subject alone? May I sug- gest that before we have any...

Sir: Donald McLachlan's article (17 November) about the effects of the Press Council on the stan- dards of the press was excellent in its context. May I quote my own experience...

Sir; The criticism of the new British Standard Time in

'Spectator's Notebook' (1 December) will have been read by so many, as it was by me, with whole-hearted approval. To advance the clock for that period of the year when precious...

Sir: There is one important omission in John Rowan,Wilson's fascinating article in last week's SPECTATCR (8 December): the middle-aged spread and the obsession with dieting that...

Sir: One expects city editors to get their facts right. Patrick Hutber (I December) says that the Observer's business pages on Devaluation Sunday referred to devaluation only as...

Times out of joint

Sir: In the SPECTATOR of 1 December J. W. M. Thompson describes melancholically and resignedly under the heading `Times out of joint' the dire consequences of an arbitrary and...

Sir: Referring to the first of the two articles of your Athens correspondent Mr Michael Llewellyn- Smith (17 November), allow me to stress the following:- Mr Llewellyn-Smith...

The treason of the clerks

Sir: A reply to Simon Raven (1 December): Tell me not here, 0 Simon Raven, What rules the Clerk betrays, Why solecisms escape reviewers, Why English usage strays, For it and I...

AFTERTHOUGHT JOHN WELLS The final shell- and bomb-shattered days of madness and despair in the Fiihrees Bunker in Berlin have hitherto remained wrapped in an impenetrable...

A very good entry this week. Style was an obvious target for those who read the last Word Game report, witness the indignant Pamela Bethel!: 'The judges of your Word Game have...

COMPETITION Competitors are invited to use the following ten words, taken from the opening passages of a well-known work of literature, in the order given, to construct part of...