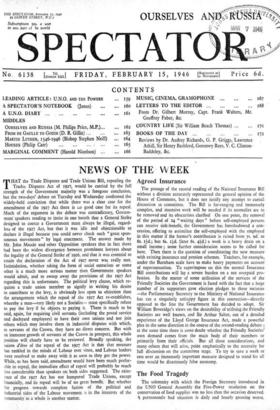 The solemnity with which the Foreign Secretary introduced in the TJNO General Assembly the Five-Power resolution on the conservation of food supplies was no less than the...

T HAT the Trade Disputes and Trade Unions Bill, repealing the Trades Disputes Act of 1927, would be carried by the full strength of the Government majority was a foregone...

The passage of the second reading of the National Insurance Bill without a division accurately represented the general opinion of the House of Commons, but it does not justify...

It was permissible to hope, when the present Government came to power, that in so far as the economic recovery of the country depended on the good will and energy of the...

Russia at the Polls

The elections to the Supremt: Soviet which took place in Russia last Sunday are the first that have been held for eight years. The Government has devoted enormous resources to...

The conference on civil aviation held at Bermuda between British and American representatives has reached an agreement. This is at least an advance orr the achievements of the...

On Monday Dr. van Mook presented Dr. Sjahrir with an official statement of Dutch policy in Indonesia which goes very far to meet the demands of the nationalists. The Netherlands...

U.N.O. AND THE POWERS

T HE constructive work achieved by the United. Nations' 1 Organisation at the first session of its history has been unfortunately overshadowed_by the Security Council...

of barley were used for, animal feeding-stuffs and 879,000 tons for brewing. This seems to show one way to a partial alleviation of the food crisis ; whether the way will be...

Incidentally, an admirable guide to committee-stage discussions is a pamphlet

Trade Unions and the Law, by Mr. Henry Strauss, who was a junior Minister in the Coalition Government, published by the firm of McCorquodale at 2s. The author writes as an...

For every bane there is said to exist an antidote,

and it is a curious coincidence that, just as Sir Stafford Cripps was explaining a few days ago that towels could not be supplied without coupons because if they were hotels...

The Brooke family, who are rather in the limelight as

a result of the offer of the present Rajah to transfer Sarawak to the British Crown, arc a long-lived race. Though Sarawak has existed as an independent (which is very far...

One interesting problem to which the National Insurance Bill has

given rise is the position of clergy and ministers of different denominations. Are they employed or self-employed persons? Plainly the former, but who is their employer,...

T HE House of Commons had a livelier time over the Trades Disputes Act Repeal Bill on Tuesday and Wednesday than over anything else this session. But with all the cut-and-thrust...

Nothing, the romantic and even some of the unromantic, would

say, is duller than statistics. Possibly enough ; but nothing is more necessary. Arguments without facts are mere puff-balls, and the best facts are often figures. Certainly,...

By A DIPLOMATIC CORRESPONDENT T HIS week the United Nations winds up the initial phase of its collective existence. As a legal, body it came into being in the autumn of last...

By M. PHILIPS PRICE, M.P.* I N Temperley's Life of Canning there are passages which show that after the Napoleonic Wars the Chancelleries of Europe were from time to time agog...

FROM DE GAULLE TO GOUIN

By D. R. GILLIE N OW that Felix Gouin has taken the place of Charles de Gaulle it is worth while drawing sortie comparison between the two. Both reacted in the same way when...

By PHILIP CARR cA HOUSE! A house! My kingdom for a house!" If that is not exactly what Shakespeare made Richard of Gloucester cry, it might well have been, if he had been...

By HAROLD NICOLSON T HE discussions which have taken place at the Security Council of the United Nations as a result of the appeals made.by, or on behalf of, Persia, Greece,...

UNQUESTIONABLY first place must be given this month to the superb recording of Sibelius's Violin Concerto in D Minor, played by Ginette Neveu, the brilliant young French...

THE DIFFICULTIES OF U.N.O. SIR, —The close of the first meeting of the U.N.O. Assembly and Security Council seems an appropriate time for some tentative stock-taking. For one...

Sm,—I have read with interest and cordial concurrence what you

say in your opening paragraph on February 8th about M. Vyshinsky's tactics in the Security Council. But I venture to differ on your comment that "This is of ill-omen for the...

.SIR,—In his "U.N.O. Diary" a Diplomatic Correspondent affirms that the

Russian use of voting procedure in the Security Council to prevent the adoption of a resolution to the effect that the presence of British forces In Greece does not endanger...

SIR, —May I suggest, through you, that the United Nations Organisation should consider the desirability and importance of establishing a section for translating into Oriental...

SIR,—Mr. Harold Nicolson is a scrupulous writer. What, then, was the powerful motive which persuaded him to pen one of the most horrifying sentences ever reproduced in The...

THE POLES IN ITALY

Stn,—I have read with deep concern the half-truths and misrepresentation of facts contained in the article "The Poles in Italy" in your issue of February 1st. Is it possible...

SIR,—The article by your medical correspondent on the 1st instant reminded me of a party at Camden Town described in a letter dated January 13, 1848, from my aunt, aged fifteen,...

Sin,—Mr. Geoffrey Cooper's article should be very useful. But I wish he had put even more emphasis on the fact that our generation has at last discovered, not invented, the...

THE HEALTH OF THE NATION

SIR,—With so much talk on health questions it is strange that more prominence is not given to the prevention of disease, and that places like the Pioneer Health Centre at...

THE Day of St. Valentine (whichever of the several claimants he was) is as a rule singularly true to its character. Thenabouts we first notice that the birds have paired. But in...

SIR,—Visitors to Cyprus must be much strpck, especially if they have recently been in British territory South of Uganda in Africa, at the immense difference in the...

AN ATTACK ON POLITICAL LIBERTY?

Sitt,—It is surely an interesting paradox that the self-styled "progressive" Labour Party is in some ways so reactionary. The purpose of the Ballot Act of 1872 was to enable the...

The fox, that once sacred animal, is being hunted not with-hounds but guns in several districts of England owing to the increasing loss of lambs. Incidentally, a Welsh shepherd...

How far has the extinction of flower stocks proceeded in England? Correspondents continually write to say that they have utterly failed to get quite common plants. This week one...

SIR,—In A Bookman's Letters, the late Sir W. Robertson Nicholl, editor of The Bookman, gives this list of the six best biographies in order of merit: t, Boswell's Johnson ; 2,...

Local feeling, which indicates an almost universal conflict, is still very vocal and bellicose in. the Lakes. The "Friends of the Lakes" express scornful horror at the...

Operation Neptune. By Commander Kenneth Edwards, R.N. (Collins 12s. 6d.) OPERATION Neptune was the title given to the naval section of the Normandy Invasion, and Commander...

Our Food and Ourselves Science and Nutrition. By A. L.

Bacharach, M.A., F.R.I.C. (Watts and Co. 5s.) ARMIES march upon their stomachs ; and, with every allowance made for the spiritual factor, this is to a great extent true of...

A Short History of Eritrea. By Stephen H. Longrigg. (Clarendon Press. 10s. 6d.) WRITING his history, Brigadier Longrigg hoped that it "might not merely interest the general...

New Bats in Old Belfries. By John Bet;eman. (John Murray. 6s.) MR. BETJEMAN'S new book will please his old admirers and, we hope, win him many new ones. He is so eccentric a...

The Lake House. By John Rhode. (Geoffrey Bles. Ss. 6d.) , Reluctant Odyssey (the second volume of The Eighth Champion cfrj Christendom) continues the adventures and the...

[A Book Token for one guinea will be awarded to the sender of the first correct solution of this week's crossword to be opened alter noon on Tuesday week , February 26th....

SOLUTION TO CROSSWORD No. 360

By t USTOS HOME railway stockholders, who had been entertaining cautious hopes of a modest increase in the 1945 rates of dividend, have been cheered this week by a truly...

Archdeacons Afloat. By C. A. Alington. (Faber and Faber. 7s. 6d.) READERS of The Spectator will not need to be reminded that the author of this lively narrative of the strange...