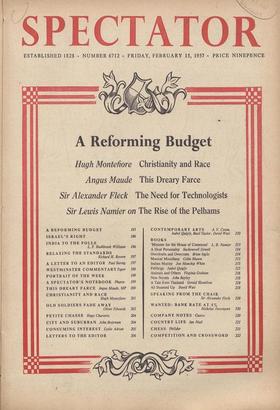 I N a little over two months Mr. Thorneycroft will have the opportunity to introduce the first completely adequate Budget since the end of the war. It must be a Budget which,...

A s Israel's demand for guarantees before with- drawing from Gaza and the Gulf of Aqaba is one of those rare cases in international affairs when right is all on one side, it is...

India to the Polls

By L. F. RUSHBROOK WILLIAMS T HE most remarkable thing, about the forth- coming contest is the apparent absence of any serious struggle for power. There is little sign of a...

By RICHARD H. ROVERE New York HE Senate committees that have been I examining our policy and lack of policy in the Middle East have begun closed hearings, and it may be some...

A Letter to an Editor

By PAUL BARING Nicosia HERE are more people in Cyprus than Mr. 'T I Foley surprised by the Administrative Secretary's letter threatening to close down the Times of Cyprus...

'MICHAEL. PARKER walked towards the aircraft. The Duke followed. Their hands clasped, long and firm. The flicker of a wry smile turned the edges of the Duke ' s mouth . . . the...

AT half-past three on Monday However that may be, Mr. Macmillan's state- ment was the last remark of the day that was both interesting and relevant, and almost the last that was...

THE Eisenhower doctrine, whatever its virtues, has at least had the demerit of pro- voking a great deal of un- welcome activity in the Soviet Foreign Office. Among the...

A CONSERVATIVE MP gave me this progress report on the

THE COMMITTEE OF PRIVILEGES is evidently wise enough to realise

that it burnt its fingers over the Junor case, and it has disposed of the other petrol cases with admirable circumspection. The Com- mittee did not even call the alleged...

BUT I CONFESS I do not know what alternative procedure

to suggest. To relax all restrictions would be one answer; but the way Ministers behave when their guard is down is not encourag- ing. There have recently been the cautionary...

I AM INCREASINGLY puzzled over the • protocol, or absence of it, which dictates ministerial relations with the press, and with broadcasting. If the editor of the Spectator, or...

was last week's Animal, Vegetable or Mineral?— a panel game

which can normally be relied upon to be reasonably adult. On this occasion the objects to be identified were human, the idea being that the panel should guess their nationality....

I HAD NOT REALISED the extent to which Dr. Mead

I SEE THAT the head of the press section of

the Propaganda Department of the Central Com- mittee of the Chinese Communist Party is called Liao Kai Lung, like an earlier purveyor of imaginary tales. Perhaps it was he who...

By ANGUS MAUDE, MP O NE does not expect distinguished or imagina- tive legislation from the Home Office; but one has a right to expect that the Government will not inflict on a...

THE NEWSPAPERS have been taking some nasty knocks in the

courts lately, in libel actions, what with the £5,000 Mr. Randolph Churchill took off the People for denigrating him as a journalist, and the £7,500 which the Empire News are...

By HUGH MONTEFIORE T HE problem of race relationships is one of the most crucial issues in the world today, and in the long run it may become the most important of all. There...

By JOHN BETJEMAN O NE of the most repulsive forms of Subtopia is the current fashion for turning old country churchyards into semi-recreation grounds. These dreary little...

By HUGO CHARTERIS H ERE no one but les Brands patrons can live in hotels, so people camp out and even the bureaucracy shoots its food. You can have a per- mit for big chasse,...

• • S By LESLIE ADRIAN I Am interested to see the increasing popularity of Chinese food in London; new Chinese res- taurants are springing up almost as frequently as espresso...

HOLD TIGHTLY SIR,—As an antidote to the recent 'Bold Tightly'

letter, perhaps a London cabby's effort towards road safety in the year 1902 may be of interest. When I was about to dart across Oxford Circus on a very wet night carrying a...

SIR,—By a single bold and imaginative stroke of statesmanship we

could upset the Nasser apple-cart, confound the Soviet intriguers and refill the so- called 'vacuum.' If we have the courage and fore- sight to seize it an opportunity now...

SIR,—I notice that you comment thus upon, the Rent Bill

: . . the Government plucked up courage and produced a Bill which went almost all, the way to rationalise the rent situation, by enabling the owners of property to dispose of it...

that nobody knows what the traffic. pattern in Oxford is. The Government, the City Council and the University should combine to find out. This is not easy to do. Obvious!),...

OUT OF THE EAST AND THE WAY BACK SIR,—I do

not know anything about Mr. George Edinger, except that he is a journalist of brief ex- perience in the Far East. May I suggest, however, that it is a pity the Spectator should...

SIR,—After all that has recently been said in these columns

regarding the old school tie in general, and government by Old Etonians in particular, 'surely the choice of the following six Socialist candidates in pending by-elections is...

his disembarking passengers at a busy bus stop to 'alight with alacrity.' How greatly indeed these bus conductors, with their ready wit and good humour, enlivened the gloom of...

ask what moved Mr. Kingsley Amis to say : 'There is little to choose between the poultry run and the PEN Club as restricting stamping-grounds for writers'? I am *will- ing to...

POINTS FROM LETTERS What future worthy of her past can

Britain hope for except maximum integration with the Common- wealth? At present, crowded at the rate of 540 to the square mile (habitable Canada has 10, habitable Australia 5),...

SIR, — Your thoughtful and thought-provoking edi- torial on 'Israel : The

Testing Point' is both timely and welcome. By speaking plainly on British policy in the Middle East you have done a service to the cause of truth and justice. The recent...

THE VERSAILLES AFFAIR SIR, — Though he himself makes no mention of

it, I assume that the occasion of Mr. Rowland Mait- land's letter (Spectator, February 8) was my review article 'No End of the Affair' on Mrs. Lucille Iremonger's The Ghosts of...

Alas, what ails you, Graham Greene, And why, and when

this prurient itch To see the infant class at Sheen Reciting Wilhelmina Stitch? The End of the Affair will be, For you, poor Greene, a fatal shock, That I'll prescribe for...

THE AMERICAN LANGUAGE SIR,-1 am preparing for Alfred A. Knopf

Fire Festival Tim strongest impression left on seeing the full ceremonial of the Shetland midwinter fire festival, the Up-Helly-Aa, is of its complete rightness for this place...

IT says something, something odd, about film distribution that two of the most interest- ing films we have had for weeks receive no West End showing. I hope this will put no one...

I SUSPECT that for a good many people The Member of the Wedding will be an ex- perience of reality at about fourth remove. A polymath acquaintance with life and literature will...

ARCHITECTURALLY one of the most up-to-date art galleries in the Commonwealth will be the Rhodes Centenary Gal- lery at Salisbury in the Federation of R h odesia and Nyasaland;...

`Minister for the House of Commons' By L. B. NAMIER T H E House of Commons, elected in 1741 and dissolved in 1747, started by overthrowing Walpole and finished by causing his...

THERE'S many a work on economics which ought to be widely read, but will not be, because it is written and presented in a way that will deter any but the most hardened...

THIS excellent and informing study of one of our greatest architects, first published twenty years ago, now makes its reappearance in amplified and augmented form, if destined...

Introduction to Mistral. By Richard Aldington. (Heinemann, 25s.) FEW poets can have been born with a name more mellifluous, or fuller of natural associations, few can have...

THE centenary of the Indian Mutiny, a particu- larly vivid and violent episode in our Imperial history, falls due this year. Presumably it will be ushered in by a whole battery...

The Return of Gunner Asch. By Hans Hellmut Kirst. (Weidenfeld and Nicolson, 13s. 6d.) Something Fishy must have pride of place this week. Not that there is much to say about...

Mermaids and Mastodons. By Richard Carring- ton. (Chatto and Windus, 25s.) Animals are Quite Different. By Hans Bauer. (Andrew Melrose, 21s.) THE object of Richard Carrington's...

As soon as we heard that the steam train was a goner in England we all (at least those with suspicious minds) knew that there would be a spate of nostalgic literature to deal...

A Tale from Thailand

THE other day I put down the book I was reading in order to listen in to, or rather to view, the Brains Trust. To my surprise one of the members of the panel was the author of...

'His wise-in-chast-wit-worthy-wife did rise.' Even . Chapman occasionally nodded when he translated Homer's Odyssey, but from his translation Professor Lord has extracted some...

More Technologists—But Where From? By SIR ALEXANDER FLECK, KBE, BSc, LLD* I THINK by this time everyone, no matter what his occupation or profession, must be aware of the fact...

IT was in another age, though not so long ago, that the Bolshoi Company bravoed and rhythmically clapped Harry Andrews's Othello at Stratford-on- Avon. What sort of noises would...

By CUSTOS ry , HE stock markets remain easy and lack the I impetus for any fresh advance. The reduc- tion in Bank rate was discounted and the issue of • more 34- per cent....

By NICHOLAS DAVENPORT IT would be churlish not to express 4. thanks for the I per cent. cut in Bank rate to 5 per cent., but absurd to pretend it is adequate. Mr....

A FOOLISH GULL When I threw out a crust the

other day, a gull came sailing down for it and found himself with an escort of jackdaws as he, returned to the roof with his prize. One jackdaw brought up the rear, hopping...

While on this subject of pests, I have been in- trigued to read of so-called super-rabbits that are bothering the farmer. There is nothing commonplace these days, and the...

By IAN NIALL BEING neither a very expert shot nor an economist, I am not really in a position to say whether pigeon shooting pays or doesn't, but it gets certain results, and...

ROCKERY CARE One of the almost imperceptible things that hap-

pens to a rockery in winter is that the soil gets washed away and fined down. It is a good plan to re-dress the whole area with loam to which sand and leaf mould may be added....

FEBRUARY 18, 1832 THE clauses of the Reform Bill have passed the Committee. The Schedules will be discussed on Monday. By Monday sennight, in all probability, the Bill will go...

Mao Tse-tung is reported recently to have said that many

different flowers may blossom in the Socialist garden. For the usual prize of six guineas competitors are invited to invent the names of three of these and give a description of...

A Chapter of Accidents

SPECTATOR COMPETITION No. 363 Report by David Yates Mason 'Walking home one evening you pause at a corner to cross a side street. Then-just as you step off the mvement-you sense...