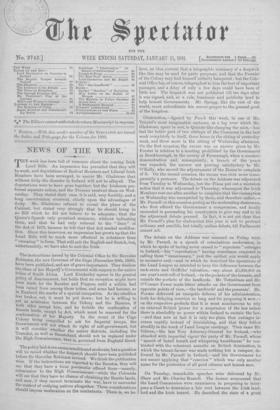 The debate on the Address was resumed on Friday week

by Mr. Parnell, in a speech of ostentatious moderation, in. which he spoke of having never ceased to " reprobate " outrages in Ireland,—his " reprobation " having sometimes...

The instructions issued by the Colonial Office to Sir Hercules

Robinson, the new Governor of the Cape (December 30th,1880), have been published, and are of grave importance. They disclose the ideas of her Majesties Government with respect...

* The Editors cannot undertake to return Manuscript in (my

On Tuesday, remarkable speeches were delivered by Mr. Shaw and

Mr. Charles Russell. The former announced that the Land Commission wore unanimous in proposing to inter- pose a Court to determine a fair rent between the Irish land- lord and...

T HE week has been full of rumours about the coming Irish Land Bills. An impression has prevailed that they will ice weak, and deputations of Radical Members and Liberal Irish...

Obstruction,—figured by Punch this week, in one of Mr. Tenniel's

most imaginative cartoons, as a log over which Mr. Gladstone, spear in rest, is Quixote-like charging the mist,—has had the better part of two sittings of the Commons in the...

The policy laid down seems sensible and moderate, but a

question will be raised whether the despatch should have been published before Sir Hercules Robinson arrived. We think the publication wise. If the instructions are reported to...

! n - NOTICE. — With this week's number of the SPECTATOR are issued

the Index and Title pagefor the Volume for 1880.

Mr. Forster deserves great credit for his answer to Lord

'Randolph Churchill's question, on Thursday night, as to Mr. Davitt. Mr. Davitt is a released Fenian, out on ticket-of-leave, and a very able organiser, and. Lord R, Churchill,...

Lord Lytton delivered his long-expected speech on Afghan affairs on

Monday,—a maiden speech. It explained in some degree the opinion held of him by his few friends and his many critics. There was some literary power in it, some grace, a felicity...

The triennial municipal elections in the 36,000 communes of France

were held on Sunday. Complete returns. have not been received, and there will be many second ballots, the candidates not having obtained a clear majority of electors; but it is...

Thursday's debate was remarkable only for speeches by Mr. Smyth

and Sir P. O'Brien in favour of the "three F's," the latter denouncing the terrorism of the Laud League in the heartiest way ; a speech by Mr. Rylands, questioning, though not...

Mr. Froude has published as a preface to the most

The Times published on Tuesday analarming telegram from Bombay about

a plot detected at Kelapore, a native State re. gelded as the centre of Mahratta feeling. The natives were to rise, to murder the Europeans, to slay the " native officers " of...

The debates on Tuesday and Wednesday were chiefly remark- able

for the speeches of Lord Hartington,Mr. Blennerhassett, and Mr. Lefevre. Lord Hartington spoke of the outrages as brought about by a set of "miscreants " holding the threads of...

We regret to have to record the death of Mrs.

Bateman, for a long time manager of the Lyceum Theatre,, and lately of Sadler's Wells, one of the ablest theatrical managers of our time. She it was who brought out Irving,...

The hope of an extremely mild winter has nearly passed

away. Only the South of England has had anything to boast of iu that way even up to the beginning of this week, Scotland and the North having had already two little winters of...

The memorial to the Archbishop of Cauterbury in favour of

a " policy of tolerance and forbearance in dealing with questions of Ritual," to which we drew attention last week, has been published, with a long list of most influential...

The Turco-Greek question has not advanced visibly one step. The

Turks still refuse to accept arbitration, unless secured the possession of Janina,—which is nonsense, as Janina is the question at issue ; and the Sultan issues daily orders for...

' The Rev. H. R. Haweis delivered an address on-

Tuesday night, in Sion College Hall, on " Freedom of Thought in the Church of England, and the General Position of the Liberal Clergy," in which he argued for the abolition of...

The text of the Circular addressed by M. Barth4lany St.

Hilaire to the French diplomatists on December 24th, 1880, has been published. It contains an unqualified denial that either France or Europe is bound to secure to Greece the...

a public meeting that he wished a shoulder of mutton satu- rated with strychnine which was sent to a land agent in the south had been sent to,Mr. Gladstone, and that he had...

-- t - LORD HARTINGTON ON COERCION IN IRELAND. T HE Liberals of this country will read Lord Hartington's masterly speech of Tuesday night with mixed admira- tion and...

THE ENGLISH TEMPER TOWARDS IRELAND.

F OREIGNERS are greatly impressed, though sometimes a little puzzled, by the present attitude of Englishmen towards Ireland, and we think they have reason. There is something...

T HE Tories, through a very intelligible and excusable error, misunderstand the situation, They see that there is a certain division of opinion among Liberals, they hoar of re-...

THE IRISHMEN ON THE DEBATE.

T niERE can be no falser notion than that there' is any sort of solidarity among the Liberal Irishmen. There are, at least, five parties amongst them,—the Parnellitoe; the non...

THE " TIMES" AND THE RITUALISTS.

IT is necessary, we suppose, that the Times, like its contem- poraries, should occasionally handle Ecclesiastical questions ; but if so, it ought to exercise some degree of...

I T anybody ever recollected particular articles in newspapers, we should have a little difficulty in praising the Bill against Corrupt Practices brought in by the...

MR. TENNYSON'S PLAY AT THE LYCEUM.

I T is only a broad impression which we can record of Mr. Tennyson's new play at the Lyceum, The Cup, for we do not possess the reporter's faculty, and either author or lessee...

TN Miss Cobbe's thoughtful and eloquent little book on " The Duties of Women," which we review in another column, she expresses the opinion that women might easily learn to be...

THE RELIGIONS OF CHINA. To THE EDITOR OP THE "SPECTATOR.") Sfa„—In your interesting review of Dr. Legge's book, "The Religions of China," you have hit upon the real cause of...

[TO THE EDITOR OF THE " BPEOTATOR..1 Sir, I trust that you will not deny my claim to the title of " a plain man," if I venture to point out that two of the supposed "...

SUGAR BOUNTIES AND COUNTERVAILING DUTIES. (To THE EDITOR OF THE

"EPEOTATOD.."1 SIR, -I will first answer your correspondent of last week. I do not think that foreign producers are enabled to outdo their competitors in British markets, by...

AMERICAN " INTERVENTION " ON BEHALF OF SWITZERLAND.

[To THE EDITOR OF THE SPECTATOR:1 Sir,—In your suggestive article of December 11th upon "American Prosperity," you state that "there is a legend current, which we have never...

[To 1HE E CTTOR OF THE " SPECTATOR "] SIR,—In reading y o ar article, "Lord Carnarvon andMr.Bright," I observe that in a quotation you give from Mr. Bright's speech of November...

[To THE EDITOR OF TEE "SPECTATOR."] 'SIR,—A fortnight ago I received an astonished inquiry from a 'friend at a distance as to the meaning of a play being announced for...

THE SAY-LANDLORDS. (BY ONE OF THEIR DIBCONTINTED TININTS. AN APOLOGUE.) THERE once was an island,—no needs to say where, 1 Twas surrounded with wather, as many more are,—...

SANDYS' " BACCHAE " OF EURIPIDES.* TUE genius of Euripides will doubtless long continue to bo to critics a fruitful subject of comparison with that of the two other great...

MISS COBBE ON THE DUTIES OF WOMEN.*

Tins is in many respects the most telling of Miss Cobbe's books, full of life, spirit, and aggressiveness. She quotes in one of these lectures a saying of the late Matthew...

"THE MYSTERY IN PALACE GARDENS."*

" Nor even the Seatons,' decided Kensington, speaking by the mouth of several Mesdames Grundy, ' not even the Seatons compassed. so complete a fiasco as the Moffatts.'" This is...

ACROSS ASIA.* Mom is an interesting and not entirely unprofitable

amuse- ment in vogue among Art students and immature Art critics, which consists in strolling through an unfamiliar gallery or collection of pictures, and endeavouring to assign...

A System, of Figure Skating. Vandervell and Witham. 3rd Edition,.

1880. (Romeo Cox.)—In skating, as in overythiug oleo, some theoretical knowledge of the principles of the art must be obtained, before anything like satisfactory progress can be...

The Brahmo Year-Book for 1880. Brief Records of Work and Life- in the Theistic Churches of India. Edited by Sophia Dobson Collet. (Williams and lcorgate.)—Miss Collet's new...

Smoot, Booxs.—This class of books multiplies upon us in a

way that defeats any attempt to deal satisfactorily with them, the more so as it is only to a few, and then only after intervals of time, that the real 'tat—that of practical...

MAGAZINES AND SERIAL PUBLICATIONS.—WO have received the following for January

:—No. 133 of the Etcher (Seeley, Jackson, and Halliday), a serial founded to encourage original etching, but which from time to time publishes etchings from celebrated...