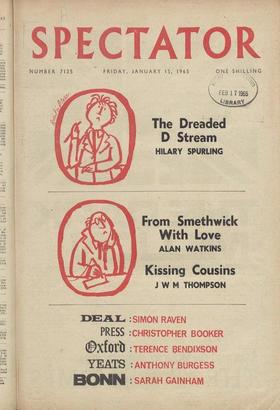 - -Portrait of the Week INTO THE LAST TEN OF the

100 days, and under the threat of dynamic action the aircraft industry was lighting for its life. With the Concord almost saved, attention was turned to the TSR-2. Air- craft...

'In the Government's view we ought now to accept that the reorganisation of secondary education on comprehensive lines should be national policy.' â Mr. Michael Stewart,...

When the Tree Falls

A DUHLIN CORRESPO.\DENT writes: When Princess Margaret and Lord Snowdon flew back to London on Sunda), night, they left behind them a hundred harassed security men, several...

A Rational ROle for Dinosaurs ? OLIVER STEWART writes : Bigness is not always best. Sir Leon Bagrit in his recent Reith lectures reminded us that the dinosaur died because it...

OUR MOSCOW CORRESPONDENT writes: The Soviet Union is settling down, and 1965 is likely to be a humdrum year compared with the last one. The first half of the. year is bound to...

KEITH KYLE writes: Nigerian politicians are fast men on the quote. In the undelivered broadcast that was to have followed the botched-up election President Azikiwe (Zik)...

By CHRISTOPHER BOOKER O N Monday morning a new man started work at the Daily Express as associate editor. His same is Harold Keeble â his mission, to refurbish the...

From SARAH GAINHAM BONN O NE of the characteristics that make British and Germans strange to each other is the difference of overt attitudes to culture. In England, manners...

From Smethwick, With Love By ALAN WATKINS W HEN he was visiting Cambridge some years ago, Mr. Patrick Gordon Walker was asked by an undergraduate what he thought of the idea...

On a Party in Opposition

By Mr. Alexander Pope Lo, the poor Tory fronts his trembling foe And deals out flout for flout and blow for blow. Learning with careful conning from the book The modern Image...

By 3. W. M. THOMPSON T HE transformation of Mr. Frank Cousins, so many people's favourite ogre and the bellow- ing irreconcilable of the Labour conference, into the mild, even...

Last week, with surprising unanimity, the editorials came out calling for caution in Malaysia. First the Spectator and Tribune, then the Guardian and the Observer. Even the New...

'OBSERVER' wins a (cut- price) Oscar for his revela- tion in Wednesday's Financial Times of the true story behind Mr. George Brown's gallant fight against rising prices. It...

The Future of the Elephant To read Robert Donovan's book

on The Future of the Republican Party (Signet Press, 5s.) is enough to give any sort of Conservative the horrors. From John F. Kennedy's paper-thin majority in 1960, Mr. Donovan...

From MURRAY KEMPTON NEW YORK W HAT your Thirties used to call the dole, our Sixties now call the public welfare system. An unpleasant institution has become permanent; and...

Walter Monckton It must be rare for the obituaries of

a public man to contain so little criticism and so much affection as those following the death of Lord Monckton. But then, he was both the nicest and the least controversial...

I suspect that one of the minor but significant factors in the frustration of exporters and busi- nessmen these days is the deterioration in the postal service. At 99 Gower...

I seem to have annoyed Mr. Gordon Walker âand all because I observed that the real reason for his defeat at Smethwick was because he was a 'casual and inefficient Member of...

By HILARY SPURLING I was open day for the press at selected 'London comprehensive schools. The sixth form at Holland Park School were pleased to see us, provided coffee,...

SMugglers' Grave By SIMON RAVEN UPWARDS of three hundred quid,' I said. 'But, my dear fellow,' said my publisher, 'yoU're already into me for twice that much:. 'I know. But...

A year's subscription to the Spectator costs 65s. (including postage).

S1R,âYou suggest in your last issue that an offer by

Malaysia to hold a referendum in Sabah and Sarawak might prevent Sukarno from stepping up the present conflict to a state of open war. Surely all the evidence is that no...

Correspondents are reminded (hat the briefer the letter, the better

its chance of publication. The Editor reserves the right to shorten letters for reasons of space.

SIR,âYour contributor Alastair Macdonald, in his article on greyhound racing, has drawn certain conclusions which, quite frankly, are not in accord- ance with facts. Firstly,...

SIR,- -Dr. Gregory-Simms is mistaken in his view that the Safeguarding of Employment Aot, 1947 (there is no Control of Employment Act), militates against the native population....

the gravity of the balance of payments crisis to party politics, at any rate in part. For the last two decades successive British governments, in tackling each crisis in the...

SIR,--- What is Quoodle (if it really is Quoodle and not some gremlin) so upset about? He can hardly accuse me of writing 'an apologia for the [Cuban] regime,' when he goes on...

Sia,-01 course the Dedham Vale Society is bound to lose in the long run: sooner or later the Vale will surely be built over, if not already submerged beneath the waters of a...

Sta,âMrs. Price gravely maligns me (Spectator, December 18) when she says that I incited students to violence in South Africa. Her allegations are un- supported by the facts...

Objections to Oxford By TERENCE BENDIXSON XFORD must be looking forward to the kJ public inquiry that will start there next Tuesday. Having made itself the Stratford of these...

For Love or Money? FI LAYING in British symphony orchestras is r not exactly a plum job when over- competition, low subsidies, box-office caprice or sluggishness and the...

At the Tate ` RS. PEGGY GUGGENHEIM'S unremitting energy and candour, as of some emanci- pated Shavian heroine, with her pithy asides (`I have always found husbands much more...

Auden's Laws T HE holidays have come, gone and so, nearly, has Festival Ballet's Nutcracker, which this year found a temporary home at the New Vic- toria, and, to me, looked...

By ANTHONY BURGESS rTHREE days before this year's Joyce junket- ' ings at Sandycove, ritual Steinach opera- tions ought to be performed in Sligo, Howth, Bedford Park and...

Tins anthology both harrows and inspires. It covers the years 1918 to 1961. Its editors 'have given pride of place to writers who were mur- dered, hounded into silence, or...

THE Horatian tradition in English literature is a lost Atlantis of the mind. Unthinkable, now, that the speeches of our statesmen should be scat- tered with Latin tags taken...

A Cornishman at Oxford. By A. L. Rowse. (Cape, 30s.) MR. ROWSE has had recourse to his youthful diaries to describe most interestingly what it was like to be a working-class boy...

How Many Miles to Babylon? By Ann Boro- wick. (Muller, 20s.) Professor Descending. By Ramona Stewart: (Heinemann, 21s.) Novetts - rs have been in the last few years in-...

IN The Destruction of Dresden, Mr. Dovid Irving has already given us one of the best and most illuminating books that have come out of the last war. One is tempted to say that...

The Machin and All That

By BRIAN CROZIER S OME people still believe in fairies and the United Nations. Our Prime Minister, to judge from his speeches, is one; and in this respect, at least, his...

The Helmsman and the Financial Storm By NICHOLAS DAVENPORT I r is small wonder that the Prime Minister re- cently appealed for the Dunkirk spirit. The economic and financial...

By LOTHBURY M R. A. J. PEECH, chairman of United Steel (whose report appears in this issue) em- phasises the value of the company's shares at an amount between 45s. and 69s.,...

By CUSTOS T HE sharp correction in gold shares brought a better balance to the Stock Exchange this week. It does no good to see equity investors running away from normal trade...

In Love with a Lion By MARY HOLLAND I cannot remember if, secure in my penury, ever thought wistfully that I would like to carry on like this myself. But by heaven, I know...

Starry Eyed LESLIE ADRIAN By PROFESSIONAL grumblers like me ought to be de- lighted at the slaughter of five-star hotels just carried out by the joint committee of the...

By ALAN BRIEN A, year ago, even at midnight on a Saturday, I could hand over my copy for.,the, Spectator to he-air-mailed and expressed by a human hand. This year, both the...

SOLUTION TO CROSSWORD No. 1152