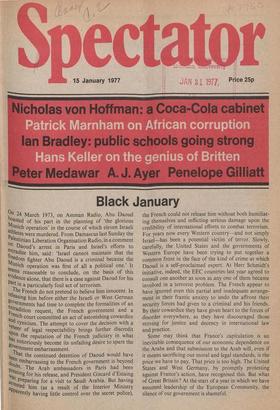 2 4 March 1973, on Amman Radio, Abu Daoud asted of his part in the planning of 'the glorious munich operation' in the course of which eleven Israeli letes were murdered. From...

While Mr Ivor Richard continued to shuffle round southern Africa, the resumption of the Geneva conference on Rhodesia was postponed. President Machel of Mozambique and President...

The bread delivery men's strike raises a number of agreeably confused issues and most people do not seem sure what, if any, line to take. One friend, not usually an enthusiast...

Secret, smouldering hatred Auberon Waugh There is an old woman Who lives in a neighbouring village to ours in France called Mathilde. She is a widow whose only son d ied; she...

Nicholas von Hoffman Washington George McGovern, an invisible man since Nixon crushed him in 1972, has emerged on the TV screens and called Carter's cabinet selections worthy...

Patrick Marnham On 15 January the 'World Black and African Festival of Arts and Culture' opens in Lagos. Even now, after two postponements, the imposing Festival 'village' and...

The invasion of Scotland

Colin Bell Edinburgh Nationalists make much of the parallels they see between Scotland and Norway; journalists increasingly suspect that a more apposite comparison might be...

Ian Bradley Parents with a boy starting at public school next year are likely, if present trends continue, to be paying fees of more than £3000 a year before he leaves. Already...

Patrick Cosg rave Nowadays, and more often than not fairly, we blame government for most of the ills that have befallen the nation. That judgment is not unfair, not least...

Estate of the Church

Brian Inglis Should you be in the region of Belsize Park this January, you will see certain men striding along purposefully, with a glint in their eyes and a spring in their...

Mysteries of the week

Christopher Booker it has been a week Of mysteries. By far the Most important mystery in the world at the ni° ment is what is going on in China. Is the Country about to become a...

Jeffrey Bernard It was just two weeks after the discovery . of the Byron letters in the Pall Mall branch of Barclays Bank that I made my own startling find. There in a carrier...

The gilt-edged boom Nicholas Davenport The speed and efficiency with which the City carries out its national duties are quite l antastic. Within four working days it subscribed...

Sir: I am now able to reveal a hitherto well-kept unofficial secret about Auberon Waugh. There was an amendment to the Public Lending Right Bill which Roger Moate and I did not...

The case of Lord Wigg

Sir: Now that the dust has settled over the prosecution of Lord Wigg and his acquittal, the time has come to consider some of the wider implications of the case. A great deal...

such a trivial case ?

Finally, having failed with their action, do they really deserve the judicial accolade which they received ? Lionel Bloch 9 Wimpole Street, London W1

Sir: I was flattered to be described, in the notes on contributors to your 1 January issue, as president of the Royal Anthropological Institute. In fact however the presidency...

Sir: I notice with dismay that you have begun to give space to advertisements which serve to promote homosexual purposes. I think I understand most of the arguments for free...

Sir: I'm still worried about the case of Mr W. E. Bell who wrote (11 December) fro" a public school staffroom to deplore .the Spectator's publication in its back pages of...

George Moore Sir: With regard to Denis Donoghue's review (1 January), may [ offer the following comments:

I. In 1901, George Moore returned to Dublin, where he would reside for the next decade. In 1898, rather than deciding to conceive a passion for the redemption of Ireland,' he...

Scottish conflict Sir : I welcome devolution as a steppingstone to

independence, giving Scotland a few years to run herself in as a functioning State, and the Scots a few years to get used to the idea of self-government. Nevertheless I have...

Sir : Really, Alan Watkins (8 January) should stick to politics rather than writing patronisingly of those who know more about language than he seems to! 'Hopefully' (in its...

Crosby's life is of interest only because of his death.

Having been blooded at Verdun, he returned to scandalise the patricians of Boston, and then fled to systematically derange his senses in the literary society of Paris; in 1929...

Peter Medawar The Selfish Gene Richard Dawkins (Oxford University Press £2.95) When confronted by what is ostensibly altruistic or anyhow non-selfish behaviour in animals,...

Learn all about it

Young Woody or tales of valium and conquest Penelope Gilliatt Woody Allen is imperially funny and racked by nerves. At his apartment in New York, a two-storey penthouse with...

Back to front Clancy Sigal The Front (Columbia) The Pink Panther Strikes Again (Odeon, Leicester Square) The Enforcer (Warner 2) The Ritz (ABC, Shaftesbury Avenue) In 1953 I...

Sparklers John McEwen When the British Museum decides to mount a show gathered from its own collections and departments the result is rarely less than spectacular, and leaves...

Death of a genius

Hans Keller 1 Was on a little Canary Island when Britten died, writing a book on Criticism. I was just APproaching the section on Posthumous Tortu r e _a much-neglected branch...

Smug Peter Richard lngrams I see that one of the subjects on which competitors for the Spectator schools essay prize are being invited to write is 'Is television harmful ?' I...