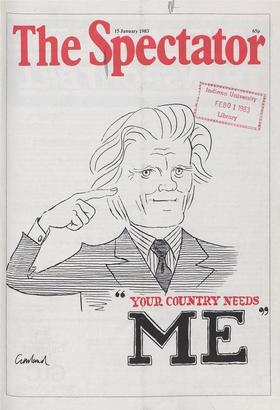 T he reputations of politicians are essentially mysterious. It is, for in- stance, useless to explain that Mr Norman Tebbit is really rather nice, or that Mrs Thatcher is...

A Colin Welch shrewdly points out on the opposite page, the ability at the toss of a golden lock to bring the Conser- vative Party Conference to its feet is not necessarily...

The 'anguish' of Greenham Auberon Waugh C riticising Mrs Thatcher's appointment of Michael Heseltine as Defence Secretary in the Sunday Telegraph this week, the great and good...

Bohdan Nahaylo T ast week's historic appointment by the 1.4 Pope of a cardinal within the Soviet Union was a 'fitting if somewhat overdue tribute to the country's estimated...

in the Daily Mirror describing child slavery in Thailand. The Spectator agrees that the exploitation of children in Thailand is a serious problem. Mr Pilger highlighted his...

Peter Nichols Rome B ulgarians are unfortunate in having lent their name through the centuries to practices regarded as unnatural: the mediaeval 'Bougre' when applied to the...

Christopher Hitchens A striking feature of the American Right is its ostentatious Christianity. The coalition of groups and individuals who made Reagan the candidate for...

Charles Moore T he following is not a very hot scoop. It is the text of a speech delivered by the Home Secretary, Mr William Whitelaw, at Glenalmond School's Commemoration Day...

One hundred years ago The Archbishop of Cashel, Dr Croke,

is, consistently enough, doing all in his power to promote disorder in Ireland. He is not connected with the borough of Mallow, but he has written a letter sup- porting strongly...

The case against Sizewell

Richard West Snape, Suffolk The public inquiry into the building of a I new-style nuclear power station at Sizewell is one of those modern events we seem to have read about and...

Why we need the monarchy

C. H. Sisson T he defence of the monarchy is a matter of some delicacy. This has long been understood. It is no doubt the reason why the tercentenary of the Restoration was not...

Gerda Cohen rlicadas clatter, a metallic cascade V./among the dense, moist greenery of maples. Nothing to do, this humid Sunday by Long Island Sound, except be happy. Thirteen...

The Beast of Gevaudan

Euan Cameron B etween 1764 and 1767, as the reign of Louis XV was drawing to its end, the people of the Upper Gevaudan, a remote and hilly district of south-western France,...

Polysyllabic snobbery Paul Johnson N othing more ill becomes a journalist than intellectual snobbery, and I am sorry to see that the Guardian is going through an acute attack....

Sir: No disrespect is meant to Greece, but the fact

that the Acropolis is being corroded by pollution and splintered by earlier in- competent restoration does not help Mr Hitchens's arguments on the Elgin Marbles (1 January). If...

Sir: I should like to hear from any friend or relative of Douglas Goldring (1887-1960), the novelist, travel writer and biographer who, in 1937, was instrumental in founding the...

The Elgin Marbles Sir: There will surely be few people who will resist the force of Christopher Hitchens's argument for the return of those parts of the Parthenon frieze held...

The sons of Edward Kennedy

Sir: Mr Henry Nen (Letters, 1 January) is quite right to denounce me. My stupid con- fusion of the Kennedy children and their problems was one of those mistakes which have one...

Sir: Colin Welch can't have it both ways (1 January). He condemns the unilateralists for a policy that might lead Russia to believe we would not fight back, having first tried...

Sir: At present there is serious concern over the ravages

which atmospheric pollution is having on the Parthenon in Athens. It has even been suggested that a transparent geodesic dome be erected over the whole structure in order to...

Sir: The article by Michael Wigan on the Orkney grey seal cull (1 January) seemed in some ways to be a reflection of the arguments of the Scottish Office without mentioning that...

Island in the rain

Sir: Mr Hughes-Onslow is misinformed in accusing the convict settlers in. Tasmania of wiping out the aboriginal population (1 January); that feat was accomplished by the British...

Theatre of the absurd

Andrew Boyle 49 A Matter of Trust: MI5 1945-72 Nigel West (Weidenfeld & Nicolson £8.95) T here is something rather peculiar about our secret intelligence services, so this...

Francis King Pictures of Fidelman Bernard Malamud (Chattel & Windus £8.50) A lthough I did not come across this novel, now reissued in a Collected Edition of Bernard Malamud's...

The Church in the Soviet Empire

Alastair Best I have read too few novels and most of them in the wrong order. I confess I would often rather read a writer's letters, memoirs, journals — journalism even than...

Round and round John McEwen T he retrospective exhibition of Barry Flanagan's stone and bronze sculptures at the Whitechapel Art Gallery (till 20 February) started as this...

In the dark Peter Ackroyd I f your eye strays to the line above, you will see that I have adopted the new classification for British films — 18, I presume, being the age when...

Camden high Rodney Milnes Romeo and Juliet (Coliseum) A a South Londoner I don't know what else the Camden Council gets up to, but their record on the arts is beyond...

Party politics Taki New York R oy Jenkins took time off and super- sonicked over last week, and Anthony Haden Guest threw a party for him. Now before anyone dismisses this as...

As usual Richard Ingrams I continue to marvel at the fact that tele- vision is so unnecessarily boring. On Sun- day ni g ht, for example, I found I had mark- ed Ralf...

Tally hopeless Patrick Marnham N o sooner does one invite the RAF to carry out low flying above one's residence, on the grounds that they are ob- viously very good at it, than...

Recommended Jeffrey Bernard T he main trouble that I find with the majority of pub and restaurant guides and columns is that they're too damn nice about the establishments...

Jaspistos reports: Competitors were asked for a dialogue from an imaginary play or novel featuring amusing misuses of the French language. Vous avez at employer le pain,...

Dire straits Raymond Keene T here is an art to staging a Grandmaster tournament on a shoestring budget, an art that has been finely honed at Brighton over the last four years....

Solution to Jumbojae(unclued lights are in brackets)

A pr'ze of ten pounds will be awarded for the first correct solution opened on 31 January. Entries to: Crossword 590, The Spectator, 56 Doughty Street, London WC1N 2LL. 1 2...

Spectator Wine Club Auberon Waugh A ter the last offer, I promised I would find a couple of 1970 clarets to recom- mend and so I have, but without tremen- dous enthusiasm. The...

T o the delight of the islanders, the irri- tation of the Argentinians and the bewilderment of many in England and elsewhere, Mrs Thatcher went to the Falkland Islands. She...