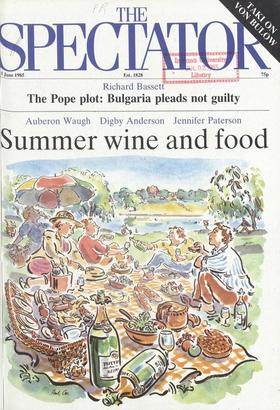 A n attempt was made, with the help of an obscure procedural device, to revive Enoch Powell's Bill banning experiments on human embryos. It was defeated after Dennis Skinner...

HOW ROT SET IN

THE carnage at the Heysel Stadium in Brussels has been an occasion for comment of the most free-ranging kind. It has enabled everyone to publish his diagnosis of Britain's ills....

TAKING ARMS CONTROL WITH A PINCH OF SALT W hat is the use of arms control agreements? Those in Washington who question the value of further adherence to the Salt I and II...

WHILE answering questions after his Speech at Chatham House last week, the Chinese premier Zhao Ziyang gave us a fine taste of the Chinese view of the world. Asked if the...

Why there is no watershed for Mrs Thatcher CHARLES MOORE 0 ne keeps reading that the Govern- ment has reached a 'watershed'. What is a watershed? At school, I heard the word...

M rs Margaret Thatcher was correctly said to have suffered a defeat when, last week, the Cabinet refused to modify the rent restriction laws. This is one part of Thatcherism...

The Bulgarians furiously deny plotting to kill the Pope, by Richard Bassett Sofia 'TRUTH will triumph over the lie.' The release of Antonov is an absolute moral and legal...

Auberon Waugh is abroad. He will resume his column next

John Ralston Saul on Thailand's determination to resist invasion SITTING weekend after weekend in Thai- land on the east shore of the Gulf of Siam far from the noise of...

ABOVE AND BELOW CALCUTTA

Andrew Robinson on the building of an Indian underground NOT long ago I took a joy-ride on the new Calcutta Metro. I got on at Maidan and travelled two stops to Esplanade. It...

The finer points of Anglo-Australian abuse, by Richard West OSBERT Lancaster once drew a pocket cartoon of two old cricketing buffers at Lords who cannot remember whether the...

George Brock on the careful electoral calculations of an 'intuitive' politician SPRING and summer present the hagiog- raphers and demonologists who attend Mrs 'Thatcher's...

There could be but one result to a vote of this kind, which was as direct a vote of want of confidence as has been passed in our time. The Cabinet met on Tuesday at noon, and at...

Survivors: A profile of Sir Angus Wilson, tireless innovator 'EBULLIENT' is the word most often used to describe him. If Angus Wilson is at a party, the party gathers around...

The press: Paul Johnson on Lady Warnock's relativism THE Daily Telegraph, the Guardian and the Financial Times are in some respects better quality papers than the Times, but...

I LIKE the market research at Visa, the credit card network. Visa's member banks lose many millions to fraud, and are constantly being badgered to make their cards contain a...

' Traill blazing HATS off to the Lord Mayor, the

First Citizen and, next week, the City's host! Sir Alan Traill's predecessors could be for- given for believing that there is quite enough banqueting in the job, as it is. (Sir...

DEBENHAMS broke the last great takeover boom, a dozen years ago. Its chairman, Sir Anthony Burney, fought off the bid from UDS by casting doubt, not just on the bidder, but on...

IT WAS Charles Goodhart who taught us that, in the jungle of money, the anthropo- logists may watch the savages, but are apt to get their answers wrong once the sav- ages start...

It takes a golden key to escape from City bondage CHRISTOPHER FILDES T wo leading City banks have gone to the lawyers to settle their differences. What is under test is the...

Sir: Alan Watkins got George Brown and the cartoonists the wrong way round (Diary, 8 June). I remember at a dinner of the Association of British Cartoonists where George Brown...

Sir: The article on the Policy Unit in the Spectator of 8 June (Andrew Gimson, 'The Guardians of Thatcherism') contains a number of questionable statements about the Unit and...

of central government not normally subject to objec- tive scrutiny. However, I would like to question his reference to me as part of a 'tendency publicly to identify the Civil...

Sir: I fear Paul Johnson slipped in his comment on the Mirror-Sun 'spoiling' case in the High Court (The press, 1 June). The Daily Telegraph did report the case on four days...

Sir: Re M. Grant Cormack's letter in your 8 June issue, I always suspected that Mr Chancellor wrote his television column for the more discerning viewer. If there is nothing...

Sir: I have long given up watching televi- sion, but

Australia's charm, refinement and HP sauce COLIN WELCH I have greatly enjoyed my first visit to Australia,' the earnest man from the Times declared. 'I hope it will not be my...

The Fair Maid's House, Perth In his article 'Twenty years

of Perth' (16 March), Roy Kcrridge describes a visit to the Fair Maid's House, Perth. We should like to make it clear that this description refers to a visit made in the 1960s,...

I t is a curious aspect of the press in Britain (and elsewhere?) that the names of the creators of visual objects in the public realm are seldom thought worthy of men- tion. The...

The happiest years of Ruskin's life

On the trail of Vivian Winter

Isabel Colegate NOW TO MY MOTHER: A VERY PERSONAL MEMOIR OF ANTONIA WHITE by Susan Chitty Weidenfeld de Nicolson, £10.95 I A severely neurotic person is torture to live...

Blessed are the fatties that repent

Leaves of summer Strong and green That gusts have strewn Across his lawn A lower wind Sweeps in a line Neat as a windscreen- Wiper, on. Wellington here Asleep in his chair Let...

T his film opens with a rather doleful teenage voice describing the iniquities of adult society: it is the oldest and most significant voice in American history, since the...

Swooning in the wings Julie Kavanagh L ike Cleopatra for an actress, Natalia Petrovna in Ashton's A Month in the Country is probably the most covetable role for a mature...

Short and sweet Peter Levi A s I was writing a book and Oxford was in its usual end of term ferment, I had forgotten I was writing this column; so I now have the opportunity...

After the verdict Taki A New York s everyone probably saw on televi- sion last Monday, when the verdict of innocent on both counts was announced, all Claus Von Bulow did was...

An otherwise splendid day Jeffrey Bernard W e had a hell of a time on our bus at Epsom on Derby Day although I was slightly disconcerted by the sight of my 15-year-old...

Country life Alice Thomas Ellis 0 ne of the things I like about the country is that the problems it presents are different. For instance while the drain in London sometimes...

Two worlds P. J. Kavanagh T here seems to be a disaster a day at the moment but if, badly shaken (and who is not), we begin to hate the present too much we run the risk of...

No. 1376: Latent poetry Set by Jaspistos: Competitors are asked for a piece of prose, as prosaic as possible in content, which, otherwise printed, is seen to be rhymed verse...

Jaspistos reports: Competitors were asked for an extract from a 'best woman's' speech at a wedding. About once a year I dream up a competi- tion which I think is a corker and...

Matchismo Raymond Keene S ince the termination of the Moscow World Championship in February, Karpov has maintained a low profile and competed in no public events at all. I...

Picnics as they ought • to be Jennifer Paterson S itting on a stinging nettle eating a wasp is as good a description of picnics in my memory bank as any other, add ants, rain,...

Eating al fresco is not for everyone: it's my idea of hell sitting squinting into the sun with the wine warming and the mayonnaise going rancid in the heat. In summer, as far as...

In the summer, men always want to eat out of doors because they spend most of their days working in offices with air-condition- ing and fluorescent lighting. Unfortunate- ly,...

Ziani's Italian restaurant in Radnor Walk, SW3, is a very good place to eat outside, though there are hazards. Until six months ago Ziani's was under another manage- ment and...

Mary's Restaurant in Priory Park Road. just off Kilburn High Road, is my favourite London eating place. Anywhere that serves steak and kidney pudding is bound to win my...

This is not particularly a summery res- taurant, and all I'm saying is that it's within staggering distance of the Camden Town urinals. The decor is modest, sort of Corfu Town...

Unless the Spectator or some other fount of wealth is paying I go for the Neal Street Restaurant. The menu steers off the old beaten track of escalope and tournedos, scoring...

My favourite summer restaurant Gavin Stamp I am rather surprised to have been asked to contribute to this as I have never been able to take writing about food seriously. More...

The restaurant I choose most often when I am paying is L'Escargot in Greek Street (telephone 437 2679), much favoured by publishers with mysterious young women in tow. Nearly...

My favourite summer restaurant is also my local, which is handy. It is the Gran Paradiso, 52 Wilton Road, SW1 (tele- phone 828 5918): owned and run by Sandro Maldini and his...

What could be more summery than Greens Champagne and Oyster Bar, in Duke Street, St James's? Buck's fizz, gulls' eggs in season, well-presented wines at non- ruinous prices (it...

Unlike Geoffrey Wheatcroft — no stranger to Spectator readers, nor to people who know the difference between Sabrina and Miranda Guinness — who when asked to write about his...

So long as you're unconcerned to move on to bed or something, La Croisette (in a Fulham Road byway) beguiles, not least if you yearn to eat out on a Sunday. Taciturn Frenchmen...

I discovered the Belvedere more or less by accident, while strolling through liolland Park last summer. It used to be the summer ballroom of Holland House and is particularly...

Auberon Waugh P erhaps it is the time of year, but I find myself taking white wine more seriously than ever before, and have chosen to inflict an All Whites offer for June....