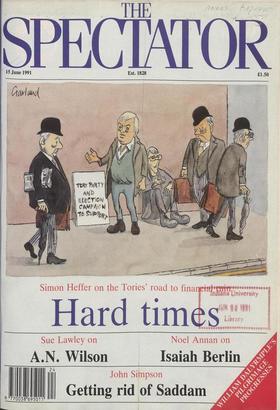 h e Chancellor denied that Britain was about to cease its veto of European monet- ary union. Colonel Gaddafi of Libya paid £250,000 into a police charity in an express- ion of...

The dangers of a resentment that dare not speak its name NOEL MALCOLM M r Major was in fighting form last week, but just whom was he fighting against? 'I have little time', he...

JOHN MORTIMER h e Labour Party's dinner dance, at the Park Lane Hotel last weekend, a hugely enjoyable occasion for those of us who attended it, produced predictable media...

The sea-captain who threw his coat into the stormy sea and said, 'Take that!' CHARLES MOORE S ometimes the lack of recognition of a great mind or a great spirit fills one with...

Time is on Saddam Hussein's action to overthrow him THE American on my right gave a little grunt of annoyance, and I started paying attention again. I had been gazing out of...

William Dalrymple crosses the hills of Navarre on his way to Compostella Burgos IT IS often assumed that prejudice in travel writing is a monopoly of the English. But walking...

William Cash on the demise of free lunches 'MANKIND', wrote Max Beerbohm, 'is divisible into two great classes: hosts and guests.' Today, he would need to add a third —...

Sandra Barwick investigates claims of unjust imprisonment — but this time not made by Republicans Belfast 'TROUBLES' tourists, generally Amer- ican, come to the Catholic Falls...

A reader received this letter: My Dear Friend! So you've booked tickets for my con- certs! They'll be the classiest events of my anniversary year. Frankly I can't wait to hear...

THE THEFT OF CHARACTER

the growing evils of the faction industry IN 1710 an author's copyright was for the first time recognised by statute, though he was given protection only for 28 years (the...

UNEASILY perched at the top of the First Secretary's in-tray are the bills for the new airport. The joint liaison group (Chinese and British, supposedly charting the way towards...

The mandarin who could not fit into Hong Kong's pecking order CHRISTOPHER FILDES T Hong Kong he mightiest mandarin of all has slip- ped through Hong Kong's fingers. This is...

THE most profitable British merchant bank? Correct: S.G. Warburg. And the next most? Some grand old name like Hambros, Rothschilds, Schroders, Bar- ings? No. Kleinwort Benson,...

LOVERS of incident and variety can always count on the Hong Kong Stock Exchange. The members of its ruling coun- cil have been trying to assert their droit de seigneur over new...

THE proverb says that Hong Kong's four powers are Jardine Matheson, the Hong- kong Bank, the Jockey Club and the Governor — in that order. Hong Kong's most open secret is that...

Sir: A. N. Wilson is either naive or hypocritical; perhaps he is both. He says (8 June) that he felt 'sick and winded' when compared in print with Kitty Kelley. He goes on: 'I...

Sir: I refer to Charles Moore's 'Another voice' in your 18 May issue (only just arrived in these benighted parts, even with the modern blessings of airmail). Having served for...

Sir: Just as people who give interviews need to be

Sir: Tears welled in my eyes as, reading The Spectator in a steam room after weight training, I encountered those cruel re- marks about women tennis players: femi- nine, weak...

persist... I WENT last week to visit a man who, because of a rare and incurable disease, had been going blind since birth, and was now completely sightless. I was told that he...

Sir: Whatever gave Mr Charles Moore the idea that I am in the habit of lugging one of my three typewriters to 'a' (there is only one) public library, which has none? As well as...

The secret lives of a pleasurist

Victoria Glendinning ROSE MACAULAY: A WRITER'S LIFE by Jane Emery John Murray, 121, pp. 381 A merican students write doctoral the- ses about Rose Macaulay now, and some of her...

Well, yes, morning has broken But don't let's make such a song and dance about it. For myself, I was rather disappoint- ed When I saw it fall into pieces. I had thought it...

The art of backing winners

Richard Lamb CHURCHILL'S GENERALS edited by John Keegan Weidenfeld, £20, pp. 464 A ficionados of the campaigns of the second world war will enjoy a wallow in this book. John...

Max Egremont HUNG PARLIAMENT by Julian Critchley Hutchinson, £13.99, pp. 208 h e House of Commons may seem a place of glamour and excitement to some, but clearly not to Julian...

So unravaged by the fierce intellectual life

Noel Annan ISAIAH BERLIN edited by Edna and Arishai Margalit Hogarth, £25, pp. 229 w hose heart does not sink at the sight of a Festschrift? These well-meaning volumes of...

Toil and trouble, but worth it

William Green DOUBLE LIVES by Stephen Wall Bloomsbury, £13.99, pp. 154 T he trade of critic,' said Mark Twain, 'is the most degraded of all trades.' Nobody has ever disagreed....

Playing away and winning

Philip Glazebrook FRANCIS YOUNGHUSBAND AND THE GREAT GAME by Anthony Verrier Cape, £18, pp. 238 F rancis Younghusband, who lived until 1942, was the last in a line of...

'Radiant with disease.' (Derek Walcott) You come out of the blue, like a seasonal breeze or the roseate flush on the Pieris leaves, as you have done every year since twelve,...

All you wanted to know and a bit more

Late Gower Arm confined below shoulder level As if winged,

the slight Lopsided air of a seabird Caught in an oilslick. 'Late' Gower, As of a painting by Monet, a 'serial' Whose shuffled images delight Through inconstancy, variety of...

The real innocence underneath

Caroline Moore WISE CHILDREN by Angela Carter Chatto, £13.99, pp. 234 B efore reading Wise Children, I confess that I vaguely thought of doing a piece along the lines of Why Do...

or over £30 on The Spectator If you're forced to share The Spectator with fellow students, then you'll know how difficult it can be to track a copy down. Now you can save...

Museums The Chinese in context S ir John Pope-Hennessy's autobiogra- phy Learning to Look is a remarkable record of an individual's intellectual history written in a lapidary,...

Time to desegregate Peter Phillips S ince this summer will see the tenth anniversary of the two leading early music festivals in the world, those held in Utrecht and Boston, I...

Like a One-eyed Cat: Photographs by Lee Friedlander 1956-1987 (V & A, till 25 August) Collected on camera Ruth Guilchng T he Americans have the strongest tradi- tion of...

The Rose Tattoo (Playhouse) Over the top Christopher Edwards T ennessee Williams's play was rejected by Irene M. Selznick in 1950 on the basis that it was material for an...

Pseudonyms corner Ursula Buchan I t was with regret, but hardly with sur- prise, that I read recently in the Times that Torbay's palms had been rumbled. Emblem of the 'English...

Hidden treasure Martyn Harris T he new-broom deputy editor of this magazine called the other week to ask why I hadn't reviewed The Simpsons. It was original, witty, and...

In good company Taki I t was the mother of fun weeks, but as a result I feel like Kuwait. Not since Prometheus has a liver taken such a pound- ing. Yet the week started in a...

The pipes are calling Jeffrey Bernard I can't say that I have been seriously inconvenienced by this week's Drinkwise Day; in fact I managed to catch the bar- man's eye on...

Minor eruption Zenga Longmore T he natural event which springs to mind when watching a child's tantrum is the eruption of a volcano. There are two main reasons for these...

A cheapie to end all cheapies Auberon Waugh T he joker in these Corney & Barrow offers is their £6 a case discount (50p the bottle) off any order of two or more cases (in...

Quiet bulldog, noisy tadpole Raymond Keene M ichael Adams from Truro, the 19- year-old chess grandmaster who was the youngest ever British champion when he won the title in...

A first prize of £20 and two ftuther prizes of £10 (or, for UK solvers, a copy of Chambers English Dictionary — ring the word 'Dictionary') for the first three correct solutions...

Solution to 1010: Precisely Solutions (in numerical order) to the

1. 'Roast mule' and 'roast mules' are both anagrams of single words. Supply them. 2. 'Facetious' is a word which contains all the vowels, once, in the correct order. What word...

West Indies walloped Frank Keating STRAIGHT up to Headingley from Epsom, I was tuned into the conspiratorial mutter of serious punters, and though you read it here first two...