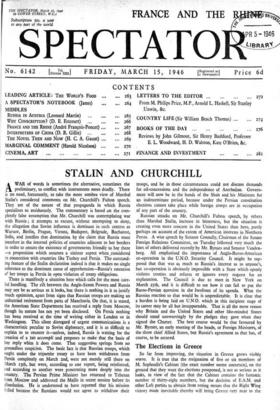 The Elections in Greece So far from improving, the situation

in Greece grows visibly worse. It is true that the resignation of five or six members of M. Sophoulis's Cabinet (the exact number seems uncertain), on the ground that they want...

There is manifestly a situation here which calls for the most care- ful handling. The rift between the Anglo-Saxon Powers and Russia may not be as serious as it looks, but there...

It is not unnatural that this year's Service Estimates, delivered on the bridge between war and peace, should be presented with some reference to the achievements of the past as...

The fruits of peace have so far been so few that the appearance of any new blossom is watched with interest and anxiety. There are still a few hazards to be overcome before the...

The House of Commons showed a proper solicitude about colonial administration when in the debate on Malayan Union mis- givings were expressed in all parts of the House regarding...

The Control of Labour

It was hardly to be expected that the change-over from war to peace conditions in industry would be completed without friction. There was therefore a temptation to accept the...

T HERE has been a revolution of opinion on the food question in the last six weeks. It began with a matter so small as to appear derisory in the light of what followed—the...

I am glad to see the resuscitated Granta, though I

confess to some doubts whether undergraduates are prepared to run to is. 6d. a copy for a weekly paper. However, the paper is apparently not to be - weekly yet, and as it is...

From a legal luminary. The witness, questioned about his condition

as regards alcohol, affirmed that he was " not as drunk as a lord nor as sober as a judge." " Ah," observed the Court, " I suppose you were in the intermediate condition...

Question-time in the House of Commons is often entertaining, sometimes

educational. Strange words appear which, unless the Minister happens to be interpretative, send Members flying to their dictionaries. I think I have already mentioned klondyked...

like them is very welcome. The ideal of getting a letter posted in London fairly late in the afternoon to its destination anywhere in Great Britain in time for the first...

Admirers of Mr. Arthur Bryant as an authority on seventeenth,

and for that matter eighteenth, century England must have asked themselves with some surprise, as they read his article in last week's Sunday Times on Sarawak, whence his...

Mr. Shinwell's Coal Board looks well. The vice-chairman has still

to be appointed, but the other members are without exception men who on grounds of general competence or special knowledge of the industry command general confidence. Sir Walter...

T HE word "mixed " has been worked very hard in messages about the reception in the United States of Mr. Churchill's Fulton address. That was only to be expected, and was no...

By LEONARD MARTIN W HEN the war in Europe ended last May a trickle of stories, some of them very disquieting, about the behaviour of the Russian troops in the occupied...

FRANCE AND THE RHINE

By ANDRE FRANCOIS-PONCET* T HERE is no problem of greater moment for the future of peace in Europe than that of the control of the Western frontiers of Germany. There is none...

By D. R. GILLIE T HE Chinese scholarship of France has always been second to none. The heirs of French humanism have been steadily labouring to make the most isolated of the...

THE NOVEL THEN AND NOW

By H. C. A. GAUNT T HE novels of Anthony Trollope have become best-sellers. His characters and their sayings are becoming household words, and not only in the marble hall of...

SWIFTER than answers, Brighter than glances In dazzling uniqueness The dragon-fly dances. A gleaming temptation Its memory lingers. I hurried to grasp it— It slipped through...

By HAROLD NICOLSON W HEN I was a younger man the Neue Rundschau was the most progressive of all the German quarterlies, exercising an influence comparable only to that which...

HE who would know the reason why he lives, He who would open wide the stable door To hear with broken breath the thund'ring hooves Of the wild ponies streaking to the moor. He...

French and English Romantic Painting." At the Arcad: Gallery. —"Jankel Adler." At the Lefevre Gallery. ROMANTIC painting is usually overpraised or underrated, depending upon...

Tire SPECTATOR, printed on thin Bible paper and weighing under one ounce, can now be sent by air mail to civilians any- where in Europe (except Germany) for La 7s. 6d. per...

La Symphonie Fantastique." " Full Fathom Five." " Cyprus is an Island." At the Curzon. I CANNOT remember ever seeing a screen biography of a musician which did not assume that...

" RUSSIA AND OURSELVES " Six,—The correspondence which has followed my article " Ourselves and Russia " makes gloomy reading. The suggestion in the main As that the difference...

SIR,—In his letter on "Russia and Ourselves," Mr. David G.

Pumfrett seems to have fallen into the error of identifying Fascist and Socialist States on the grounds of the one common factor of State control. While opinions may...

Slit,—I think it is high time that we ended our

interference in Spain's domestic affairs. It is in no way aiding the Spanish Republicans and Monarchists. On the contrary, alarmed by foreign opposition, the Caudillo is...

Sul,—Your leading article under this title is searching and timely. The explanation of Russia's present international attitude appears to be capable of only ene interpretation....

Ste,—The majority of your readers will, I think, agree heartily with your leading article on our relationship with Russia in last week's issue and with what you say on the...

SIR,—Quaker relief workers in Germany remind us constantly of the book and pamphlet famine in that country and of the hunger of proved democratic Germans for good literature in...

SIR,—My friendship with The Spectator dates back forty-six years. At Stonyhurst College we boys in the sixth form (called "Rhetoric ") had to read its leading articles to the...

SIR,—To have watched a series of ballet performances in Moscow as Miss Morley has done is not sufficient to make a competent critic on the subject. Whether Mr. Redfern has been...

SIR,—In the course of many thousands of miles of travel in West Africa during 1 944-5 I was frequently an imposed guest of many of those about whom Mr Maurice Gordon writes in...

TIMBER SUPPLIES AND THE CRAFTSMAN

SIR,—May I, after a quarter of a century spent in designing works requiring the highest degree of good craftsmanship, endorse your corre- spondent's plea for the small...

THE SCHOOL AND THE VILLAGE

SIR,—I was glad to find in Mr. Edwards's article some corroboration of our own local experience. He said: " When the London children arrived during the evacuation period their...

A VISIT to the Western side of England has more than ever convinced me that the agricultural critics, who dogmatically recommended large farms and centralised organisation of...

SIR,—The hygienic aspect of the matter was barely touched on in your most disturbing article. During the last war my dentist had a young woman patient whom he knew and whose...

SIR,—The letter from Mr. Thompson of Kuruman concerning my review

of Robert Moffat's Journals, Vol. I, is a chastening corrective For the blunders in the dates of the early record I am wholly to blame, having failed to note the length of the...

MOFFAT AND THE BECHUANA

Sm,—Livingstone Moffat's farm was certainly called Quaggas' Kerk when I stayed there in 1912. It is described on pages 154-5 of Two Young Men See the World. "Kerk" means a "...

SIR,—The article in your last issue on " Australia and Asiatics " revived memories of a wild night in 1895 when the Catterthun,' only a few hours out of Sydney en route for...

The performance of the Second Part of King Henry IV has stirred Mr. Henry Warren to the white-washing of Mr. Justice Shallow as a good countryman. Did he not say: " Nay, you...

Nutria on the Norfolk Broads In reference to the nutria

that are causing some slight alarm on the Norfolk Broads, an interesting account of the animal reaches me from a rancher in Paraguay, that most Paradical country. He says that...

While the crocuses and the first daffodils have been totally obscured (though not much damaged) by the snow, the weeping willow has con- tinued to expand its yellow leaves and...

SIR,—As grammar school pupils we protest againg the curtailing of our school holidays under the new Education Act. Now we have the same holidays as elementary schools. Every...

New Light on Darwin Charles Darwin and the Voyage of the • Beagle.' Edited with an Introduction by Nora Barlow. (Pilot Press. 15s.) WE now recognise that Darwin's voyage on the...

THE editors of this well produced and illustrated book are well known as experts in their subject. Gilbert McAllister is the Hon. Treasurer of the Town and Country Planning...

DURING the years 1942 to 1945 a specimen of homo sapiens, widely ',cloyed and known as Sir Arthur Keith, thought himself able to it in a room in Kent and write this series of...

THE first dully named book on the above list—and all the titles are bad this week, I think—is a collection of three short stories by the author Of Fireman Flower, and, if only...

one guinea will be awarded to the sender of the first correct solution of this week's crossword to be opened after noon on Tuesday week, March z6th. Envelopes must be received...

SOLUTION TO CROSSWORD No. 364

By CUSTOS WHETHER or not the American Congress sees fit to ratify the loan agreement reached in Washington last December—and the chances are surely that it will—Britain's...

Steer. By D. S. MacColL (Faber and Faber. 25s.) D. S. WiacCou. is a most capable biographer ; he puts down the facts, describes relationships and assesses talent with skill,...