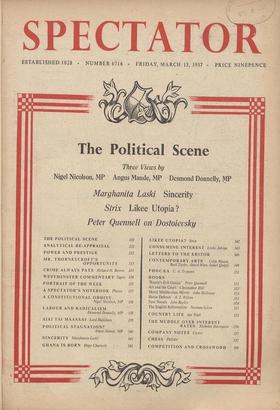 T HE results of the 'little election' may have surprised some people, but they can hardly have surprised the Government. When Mr. Macmillan became Prime Minister there was an...

O N both sides to the engineering and ship- building dispute, the determination has grown to make a fight of it. This is not because of any particular rancour between them; nor...

F UTURE historians are going to have some diffi- culty in deciding at what point British Middle Eastern policy began to go wrong. The errors accumulated in ten years have been...

FOR US in Europe it is a matter of vital importance to maintain the canal as an international waterway. — Mr. Selwyn Lloyd, October 12,1956. IT IS NO exaggeration to say that...

By RICHARD H. ROVERE official, the Vice-President is somewhere in darkest Africa, the Secretary of State is headed for the Antipodes, and Mr. Eisenhower is pack- ing his bags...

And indeed it was. At Thursday's meeting of the 1922 Committee Dame Irene Ward had an- nounced that unless she was satisfied by some member of the Government on the following...

IN THE SPECULATION arising out of Sir Hartley Shawcross's decision

to move from Bar to Big Business, the most interesting comment I have heard is that it may start a new fashion in this country—or, rather, transplant a fashion from America....

MR. RANDOLPH CHURCHILL, once a vehement opponent of commercial television, effectively commercial- ised the BBC the other night—turn- ing 'Panorama' into an advertisement for...

CRIES of disillusionment front the State Department and cries of 'We told you so' from everyone else have been re- echoing round the capitals this week. High hopes that the...

I AM MUCH impressed by the proposals put for- ward

in the Observer by Cardinal d'Alton, Primate of All Ireland, for a reunification of Ireland within the Commonwealth. It is true that the proposals are not remotely practicable,...

By NIGEL NICOLSON, MP T AST WEEK I became a constitutional oddity. LA remain the Member for Bournemouth East and Christchurch, because no power can unseat me, and I have refused...

I WAS INTERESTED to read in an article by Mr.

Alexander Werth on East Germany that the ten- dency now is for East Germans to stay where they are and that 'only 2,000 people a week now leave the Ease for the West.' Two...

I NOTED a few weeks ago an appeal in the

Moscow press calling on the Party to 'protect' candidates in the local Soviet elections from 'hostile and anti-Soviet elements.' I now see that that protec- tion has not been...

IN AN ARTICLE appearing recently in The Thnes by the

paper's Architectural Correspondent, an Italian housing estate was held up as a model, beside which English planning of housing estates stood in glaring contrast. As it...

RAPIDLY EXPANDING BANK OFFICIAL must move into something much bigger

and sacrifices an extremely pleasant mod. (1931) MILL HILL HOUSE. . . . (advertisement in Sunday Times, March 10) The end of the credit squeeze?

By DESMOND DONNELLY, MP T HE Little Election has an important lesson for the Labour Party. It is that the best type of Lord Wilton or Mr. Woolson machine cannot produce a high...

(from the Greek) Ah, when the mallows in the garden die, And when the gay green herbs all withered lie, Another spring shall bring them back again. But we, the great, the wise,...

By ANGUS MAUDE, MP T HE results of the recent bout of by-elections were received by the Government with apparent fortitude. Conservative Central Office, moreover, seems anxious...

By MARGHANITA LASKI H ALLO, old boy, nice to see you again. Don't think we've met since that Any Questions down at Trollop Monachorum. What's it tonight —white-slave traffic?...

By STRIX New York HESE'LL do,' said the nice man who was I . showing me round. We took our places in two chairs marked respectively NORWAY and CUBA. The eleven members of the...

By LESLIE ADRIAN rr HE Cadillac, the mink coat and the owner- 1 ship of a swimming pool are the conventional signs of success all over the world. If you will settle for the...

OUT OF THE EAST AND THE WAY BACK

SIR,—While in Malaya (including the West Coast from Pontian to Perlis) I did meet scores of con- scientious British, some speaking passable Malay. But the whole essence, of my...

SIR,—In your leading article on February 22 you castigate the British Government foe'reiterating the bedraggled argument that nothing can be done [in Cyprus] until terrorism is...

A Christian Gentleman Christopher Hollis Cyprus M. A. Pamir Out of the East and the Way Back George Edinger The Queen's Courts Peter Archer Christianity and Race P. C. Jackson...

SIR,—Mr. Robert Lindley insists in his review of The Queen's Courts (your issue of March 1) that the place of statutory tribunals in the scale of im- portance is not 'after the...

SIR,—The prominence which' your issue of February 15 gives to Mr. Mason's book Christianity and Race encourages me to write in amplification of Mr. Montefiore's article. In his...

SIR,—I am amazed to find the Spectator giving space —for the second time—to a grossly disagreeable attack on Lord Noel-Buxton. Mr. Evelyn Waugh's cantankerous and undignified...

SIR,—May I supplement Mr. Marcus Cunliffe's in- formation about the

MARCH 17, 1832 THE English law being more than ordinarily complicated, is most properly and prudently left to be administered by twelve men taken from the common ranks of life,...

SACRED COWS SIR,—Mr. Hillborne, unlike Mr. Greacen, accuses me of

unfairness. Part of his letter is hypothetical abuse— the silliest of controversial methods. But even when he rises to argument his concern for fairness does not extend to...

TAPER AND THE WELSH Sm,—Much as I customarily enjoy the

Parliamentary commentary of your correspondent Taper, I must suggest that his references to the recent debate on Welsh Affairs in the Commons took little account of the...

SIR,—You don't want to listen to that fellow Page prating

on about the Yorkshire Home Rule Associa- tion. l'm perfectly sure there isn't such a thing. We in Yorkshire are intensely proud of the part we have played in bringing England...

DOUBLING THE STANDARD OF LIVING SIR,—Ever since Mr. R. A.

Butler won the Nebulosity Oscar for claiming to double the standard of living in twenty-five years, I have been wondering just what that expression meant. I have, however, now...

Foreign Keys DURING the past month or so, the BBC have been giving consider- able attention to the music of several of the refugee composers living in this country. Some weeks...

Enemy of the Rose FOR forty-five years Percy Wyndham Lewis,

who died last week, chose not to provide what most English readers and pic- ture-viewers expect from an artist and a gentleman. Lewis remained all his life consistently in...

A FORMIDABLE list of acknow- ledgements appears among the credits of Vincente Minelli's — - z biography of van Gogh, Lust for Life—to the galleries about the world that allowed...

'A GOOD producer must efface himself completely. If after he has finished his production he leaves any positive evidence of, .nis work behind him he inevitably de- stroys for...

'Russia's Evil Genius' BY PETER QUENNELL T liE Emperor Nicholas, first of his name, was also the first Russian ruler to intervene in Hungary. During April, 1849, he sent his...

. they called down mighty curses on who- soever should stay behind. And they sank in the sea a mass of iron; and swore never to return to Phociea before the iron should again...

Art and the Court

THIS is a scholarly volume, packed with informa- tion and discriminating comment. It has nearly one hundred excellent plates and ten useful plans. Although it is a report in...

Tuts novel developed in England just after tea, cocoa, coffee and tobacco. Perhaps there was a genuine connection : anyhow, novels have belonged to a middle-class world. The...

The Ram in the Thicket. By Anthony Glyn. (Hutchinson, 15s.) All Through the Night. By Richard Vaughan. (Hart-Davis, I Is. 6d.) The Ram in die Thicket seems to me to be a very...

By IAN NIALL ALTHOUGH they are a common sight, I never cease to admire the wonderful capacity starlings have for acting in unison. I watched a flock of about 300 at the weekend...

Most pretty flower gardens in summer contain stocks and asters. Buying plants is expensive, and large numbers may be grown from a small amount of seed sown this month in boxes...

Protest about the habits of bees appeared in my newspaper the other day. Living close to his neigh- bours, a beekeeper cannot expect to be entirely popular, and white articles...

The Old Religion : An examination into the Facts of the English Reformation. By J. L. C. Dart. (S.P.C.K., 17s. 6d.) WHY do you praise Ridley? Do you know sufficient about him to...

Fox ROUTED From Massachusetts a correspondent writes, 'I was amused

at your story of the rabbit chasing the cat as it recalled to mind an incident I witnessed about a year ago. In this latter case the cat was the pursuer, not the pursued. I live...

THE MUDDLE . OVER INTEp,EST RATES By NICHOLAS DAVENPORT IN the

correspondence columns last week Mr. Hugh Dalton reminded us that he had instituted and held, when Chancellor, the economical rate of 1 per cent. on Treasury bills and that...

By CUSTOS THE week on the Stock Exchange began with a 'black' Monday. The strike threat to the shipyards and the engineering industry,Nasser's intran- sigence, the nearer...

On a large building site in London the contractors have provided a 'Public Observation Platform' to enable passers-by to watch the .excavations. Competitors were asked to give a...

More and more merchant ships fly the flags of an

nautical nations and we read that Liberian tanker tonnage now exceeds Great Britain's. Taxation is said to be destroying more Briti.sh shipping than ever the Dons or Doenitz...