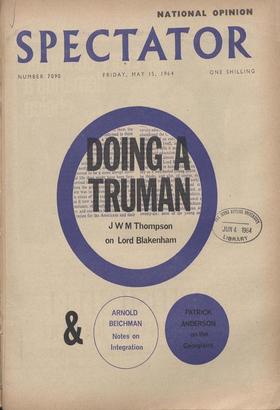 A WEEK LIKE OLD TIMES, with Western diplonAts claiming they had been drugged in Russia, with the public opinion polls as widely dissimilar as ever—a Daily Express Labour lead of...

in the past week : the by-elections, the local elections, and the astonishing discrepancy between the National Opinion Poll (Daily Mail) and the Gallup Poll (Daily Telegraph)....

T HE Americans are behaving over Cuba much as some Britons would like to behave over Egypt. In fact, neither the American nor the British Government can possibly afford to back...

SARAH GAINHAM writes from Bonn: The latest instalment of recurring concern between the United States and West Germany over foreign policy must be seen from the view- point of...

Housing the House By DAVID WATT This warning is an essential prologue to any realistic discussion' of the present controversy over the extension of parliamentary accommoda-...

From ARNOLD BEICHMAN T HE sixteen-year-old son of some friends of mine returned a few weeks ago from a school party ecstatic—his first crush. She was a Negro girl, he told his...

From HARRY FRANKLIN SALISBURY I F ever a country lacked leadership when it most needed it, that country is Southern Rho- desia today. From the beginning of its white settled...

BIDAULT some little time ago entered this country with a passport genuine in all respects ex- cept that it was made out in another name. The Estimates Committee of the House of...

y CHRISTOPHER HOLLIS Who won the vote? 'I,' said Olivier, 'you've only to note Four voted for me for three who opposed it. Who then, I would ask, could not have supposed it...

Victory for Caroline So the pirate ship stays. Excellent. Another

victory against the Nursemaid State. Naturally the Labour Party wanted to stop people listening to what they choose to, but it passes compre- hension how Mr. Bevins thought he...

Please Go Away Olga Franklin is an experienced journalist, but

she must forgive me expressing mild sur- prise at her riposte to Randolph Churchill's assault on the press treatment of Mr. Greville Wynne. 'If there had been any indication,'...

No Gunfire : No Troops `I intend to march my

troops towards the sound of gunfire.' In the general derision of Mr. Grimond's adolescent bombast last autumn, no one noticed haw subtle he had been in selecting the word...

Two things surprise me about the National Gallery's new Rembrandt, Belshazzar's Feast. The first is the frame which the Gallery gave it temporarily and are now thinking of...

Two new books in the Right-Angle series are Published at

six shillings each by Michael Joseph. Peter Goldman writes on the Welfare State and Philip Goodhart (in The Shadow of the Sword) deals with the whole range of over- seas...

'Doing a Truman' Awfully Nicely By J. W. M. THOMPSON T HIS week's by-election results, scrutinised sideways, backwards, upside-down and from all other angles as they are...

The Commonwealth at the UN

From OUR UN CORRESPONDENT NEW YORK TN the framework of present-day United Nations 'procedures and practices, 'the Common- wealth is something of an anomaly. In an organi-...

Your Lifebelt is Under Your Seat

By NIGEL BUXTON TN Capri there are two beaches, the Marina 'Grande and the Marina Piccola: in summer, for the ungregarious, both of them are hell. The sea, however, is...

By CHRISTOPHER BOOKER But there have been signs of late that the Guardian is making a bid to mend its ways. And there, the Monday before last, as the Lively Minds were tangling...

A NIGHT WITH THE MODS

have been a reader of the Spectator for a number of months, and the issue of May 1 was the first time I have ever known it to includb an article of cheap sensationalism. I refer...

LORD KILMUIR'S MEMOIRS SIR,—Mr. Kenneth MacGowan writes that he is

'shocked that in order to attack the work of a man of whom obviously he does not approve, somebody bearing the name of Churchill should, even obliquely and by implication, find...

CATHOLICS AND SALAZAR SIR,—Individual Catholics in Portugal are, I admit,

among the strongest supporters of Dr. Salazar's un- just and oppressive regime—Cardinal Manuel Cerejeira, Patriarch of Lisbon and a lifelong friend of the Premier's, is perhaps...

SIR.—Leslie Adrian's column, irritatingly omniscient though it frequently is, has,

I have often felt, done Egon Ronay's Guide to London Pubs as being 'much a great deal of good in a number of different fields. I must take exception, however, to its reference...

Sia,—May I refer to Leslie Adrian's enjoyable and constructive article

in your last issue? Our Guide to Restaurants and Hotels (which in- cidentally is in its sixth year, not its third) strongly disagrees with what the article alleges to be the...

was surprised, and not a little alarmed, to read Alan

Brien's dangerous advocacy of Natural Fatherhood in your columns last week. While medical advances in paternity care have, it IS true, emerged in recent years, any experienced...

SIR,—We look to the Spectator for enlightenment and might have hoped for dispassionate analysis of the difficult question of the proposed House of Commons extension. All we get...

SIR,—To support his contention that 1 have not made out a case for modernising the law Mr. Mursell airily ignores the list of facts I recited and dismisses Lord Gardiner's...

Sm,—Replying briefly to the critics of my letter giving concrete objections to the savage sentences imposed in the train robbery case: 1 did not in- clude Mr. Lloyd Morgan's...

SIR,-1 hate to carp, particularly when the writer in question is Leslie Adrian, whose column I read with great pleasure and profit. But it is said in your issue of May 1: 'Under...

What a Lovely Dream and Let's Have Fun, The Life Annuity. (Ald- wych.) — Entertaining Mr. Sloane. (Arts.)—The Screens. (Donmar Re- hearsal Room.) 'IN a foreign language which...

From IAN CAMERON CANNES So we have had the Swedish New Wave, the Spanish, the Japanese, the American, British and French. The first to appear after the Roman Empire had fallen...

Bride in the Bath

LEGS hunched and head ducked in a modern bath bristling with overhead gadgets, the human as- sumes a monstrous other- ting of enamel. But Brett Whiteley's sudden revelation of...

Standing up to Bruckner

By CHARLES REID A STRIKINg thing about Bruckner is that you assimilate him as he goes along. Schubert himself is not more understandable at first go. In an age when music is...

THERE is a terrifying pic- ture in Bernard Taper's perceptive new biography of Balanchine, about to be published by Collins and required reading for all and sundry. The picture...

Honey for Tea By PATRICK ANDERSON Y EARS ago in the cynical History Sixth at Sherborne we used to repeat the line, 'If I Should die, think only this of me,' and then add, with...

A Question of Semantics

Rainer Maria Rilke : The Years in Switzerland, By J. R. von Salis. Translated by N. K. Cruickshank. (Hogarth Press, 35s.) No task of translation could be more exacting than to...

, A Trauma from the Fens MR. HARTLEY'S devastatin g look

forward in Facial Justice (surely his finest book?) has rather Wiled for me his more characteristic lookin g back—back, specifically, to lush childhood Edens Complete with...

MR. PIOTR RAWICZ was acclaimed in Paris as another Kafka and/or Camus (how both?) and Blood from the Sky hailed as a masterpiece rankin g with The Last of the Just. Well, The...

Unnatured by itself, it wants Nothing and for nothing; speaks little, takes Almost whatever it gets ... in almost an elegance of The dry and unobtrusive. Its defect is,...

A Look Around the Bloc

By DAVID FOOTMAN S oviet Foreign Propaganda' had been written, but not yet published, when Professor Barghoorn was arrested in Moscow and kept locked up until President...

The Letters of F. Scott FitZgerald. Edited by As the author of a first-rate biography of Fitzgerald, Mr. Turnbull has now moved on to edit his letters. And there can be little...

By NICHOLAS DAVENPORT THE old `stop-go' control- lers at the Treasury-now happily enjoying an en- forced rest-might usefully employ their leisure time in studying the American...

By CUSTOS T HE equity market has come back further and not even the excellent results of MARKS AND SPENCER can stop it falling if that is the fashion- able trend. As I have...

B y ALAN BRIEN AFTER all these thousands of years, it seems extra- ordinary that the vast majority of men in all cul- tures are still obediently falling asleep around mid- night...

LESLIE ADRIAN is on holiday.