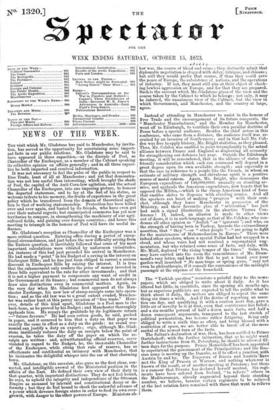 Tnm 'visit which Mr. Gladstone has paid to Manchester, by invita- tion, has served as the opportunity for ascertainin g some import- ant facts in our public relations. Mr....

The "Turkish question" occasions a painful duty to the news-

papers, which are obliged to write about it daily. As it has altered but little, in essentials, since its opening six months ago, but as sagacious publicists are expected to...

Instead of attendin g in Manchester to assist in the honour

of Free Trade and the encoura g ement of its future con q uests, the " Manchester Manufacturer," and the Member for Manchester, went off to Edinbur g h, to ventilate their own...

Qtramv Vicroitra, accompanied by Prince Albert and the children, left Balmoral at eight o'clock on Thursday morning; posted to Banehory ; took the railway there for Aberdeen;...

Mr. Gladstone arrived at Manchester on Monday—the guest of Mr. J. C. Harter. On Tuesday he appeared in public for the first time, on the Exchange. Great numbers had assembled to...

In the Court of Aldermen, on Wednesday, a report from the Com- mittee of General Purposes was read, stating that they had approved of a site for the City Asylum, selected by the...

The Peace Conference began its oratorical proceedings on Wednesday, in the Music Hall, George Street, Edinburgh. The attendance of dele- gates was respectable, and besides Mr....

Lisburn has been the theatre of electioneering struggles for some time p a st. Finally the Liberals have carried the day : Mr. Jonathan Richard- son, a Quaker, was elected on...

FRANCE.—News from France is of the scantiest. The Emperor and Empress left Paris for Compiegne on Wednesday. The rumour respecting the army to he sent to the East has rather...

The despatches from the Arctic voyagers, Sir Edward Belcher Com- mander Pullen, Commander M'Clure, and Commander Inglefield, hare been published at full length in the morning...

The decrease of the number of deaths from cholera at Newcastle to one, on Monday, is followed by a large increase in the Metropolis. 'The Registrar-General, in his report for...

Mr. Henry Drummond, Member for West Surrey, having been invited to join the Peace Conference at Edinburgh, has not only declined, but has forwarded a stinging letter to Mr....

The death of Mr. Charles Baring Wall creates a vaca

The Peace Conference at Edinburgh met on Thursday forenoon, 'and

passed resolutions, stigmatizing the present system of governing India and the Colonies, as productive of war ; and recommending measures re- moving obstacles to the free...

News from Australia to the 19th July has been brought

via Panainq by the La Plata. There was a deficiency in the gold-supplies, inconse- quence of the bad state of the roads and the recent heavy rains. Therts were in Hobson's Bay...

The Mandela- of yesterday contains a decree placing foreign vessels

on the same footing with French vessels for the carrying from the Mediter- ranean into the Ocean, and vice versa, grains and bread-stuffs, rice, dried vegetables, and potatoes;...

SATURDAY. Despatches in anticipation of the overland snail reached London last night. The latest dates are from Bombay to the 12th September, and Hongkong to the 24th August....

Excitement the different Stock markets continues unabated; but, com- pared with last week, the fluctuations in Government Securities have been less violent ; and in addition to...

At Mark Lane yesterday there was a thinner attendance than

usual, and very little disposition to purchase except at a greater reduction than holders were willing to submit to. The general feeling is that prices are likely to give way to...

It is about a twelvemonth since we recorded the great success of Un Fits de Fatnille (M. Bayard's last piece) at the Gymnase. As we can hardly hope that the memoriea og,otur...

If programmes are to be trusted, we are soon to

have another Theatre du Gymnase in Wych Street. Mr. Wigan's announcement for next Monday looks very much as if he had taken for his model the most elegant of Pa- risian comic...

No one who has ktid any attention to the monthly

returns issued by the Board of Trade, which show what an increase has taken place this year in the consumption of Foreign and Colonial produce, could have any doubt as to the...

A long tale of wo, entitled Georges et Marie, has been produced at the Gaits; a theatre which, as if in defiance of its name, generally brings out the dismallest pieces in...

Abstract of the Net Produce of the Revenue of Great Britain, in the Years and Quarters ended 10th October 1852 and 1853 , showing the Increase or Decrease thereof. YEARS...

CORN AND MONEY. ONE of the worst evils connected with a commercial crisis is the ignorance which prevails, at such a time, among the great mass of sufferers, as to the real...

IT is rather curious in the conduct of public discussion, that tho arguments which have been used both "for war " and " against war" appear to be equally rejected by the public...

RESULTS OF THE ARCTIC EXPEDITIONS.

Tire latest intelligence from the Arctic regions may be considered to have closed the question of Sir John Franklin's fate. It is pos- sible that individual devotion might still...

AN instance of what might be done if we had an international tri- bunal to regulate laws affecting men connected by common sym- pathies, but distributed under different...

EVERY visitor of Paris is struck with the extent, variety, and im- portance of that which Louis Napoleon is doing for the French capital; not only in finding employment for...

now STRIKES MIGHT DE PREVENTED. 12th October 1853. SIR—Inferring from several able articles in recent numbers of the Spec- tator that you are fully alive to the enormous...

CALVERT'S CORRESPONDENCE ON THE Wilt IN FLANDERS AND HOLLAND. * THE war in Flanders and Holland under the Duke of York was so disastrous in its course and results, is generally...

11th October 1863. Sen—Out of the shells and husks of the Turco-Russ question there has at length fallen .a kernel. The perception , has arisen, and gains ground in the public...

THIS title is inaccurate : the three Presidencies are not treated distinctly as such, but embraced in an account of the whole of India. The historical précis of the Himdoo,...

TRE adventures of Mr. Jones in Australia were limited to some excursions in the Moreton Bay district and a residence at Sydney. His volume, however, is a fresh, readable,...

SOME observation of lifer in a limited sphere, with a pleasant style, and a power of naturally sustaining a commonplace dia- logue, are the principal merits of The Twin Sisters....

Booze. The History and Traditions of the Land of the Lindeays, in Angus and _Kearns; with Notices of Alyth and Meigle. By Andrew Jer- vice. To which is added, an Appendix...

On the 6th October, at Handsworth Rectory, Staffordshire, the Wife of the Rev. George W. Murray, of a daughter. On the Gth, at Soften Court, Herefordshire,:the Wife:of Thomas...