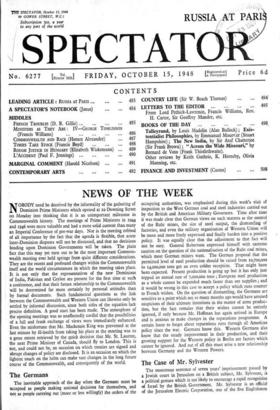 The Case of Mr. Sylvester

The monstrous sentence of seven years' imprisonment passed by a Jewish court in Jerusalem on a British subject, Mr. Sylvester, is a political gesture which is not likely to...

N OBODY need be deceived by the informality of the gathering of Dominion Prime Ministers which opened at to Downing Street on Monday into thinking that it is an unimportant...

The inevitable approach of the day when the Germans must be accepted as people making national decisions for themselves, and not as people carrying out (more or less willingly)...

It is still a disappointment to many Americans that General Eisenhower preferred the Presidency of Columbia University to that of the United States, but it is a good deal easier...

Those ordinary citizens who, taking the need for increased pro- duction as a matter of course, were shocked at Tuesday's statement by the T.U.C. that there is still a great deal...

The central point of Monday's Treasury statement on the dollar balance was that in the three months ended September 3oth the sterling area paid out £76,000,000 more, in gold and...

Mr. Truman Does It Again

There was never much to be said for Mr. Truman, as President of the United States. From his first brusque cutting-off of Lend- Lease, at the first moment permitted by the letter...

4W E ought," said Mr. Churchill in his speech to the Con- servative Conference at Llandudno on Saturday, " to bring matters to a head and make a final settlement." The...

An arresting example of the folly, almost the mendacity, of

judging a business by the dividends on its nominal capital, and on that basis demanding a higher fix on profits, is provided by the balance-sheet of the well-known Brightside...

The conference of .Liberal editors that has been held in

London this week has, I should judge, been very valuable. The editors, twenty-four of them, have come from thirteen different countries, and some of them, like M. Erkko, of...

OME of the complications of commercial broadcasting are S instructively indicated by President Truman's experience at the end of last week over the proposed despatch of Chief...

Certain events have got me interested in the Philosophical Society of England, a body of which I know little, but of which it might be instructive to know more. Whitaker has no...

The case of Mr. Arthur Homer, the miners' leader, is

singular. Mr. Homer is a Communist ; there is no disguise or concealment about that. But he has worked with complete sincerity to improve coal-production in this country. I have...

IV.-GEORGE TOMLINSON By FRANCIS WILLIAMS Mr. Williams contributes today the fourth and last of his character sketches of certain Ministers. The view he takes in each case is,...

By HORACE ALEXANDER I F the greatest political issue of the next fifty years is to be the race problem, as seems not unlikely, then the present Common- wealth Conference may be...

By FRANCIS BOYD HE conference of the Conservative Party at Llandudno last i r week marks the beginning of the party's fourth year in opposi- tion—the last full year before the...

By ELIZABETH WISKEMANN A VISIT to Hungary in 1948 after an interval of nine years provides one with a great deal of food for thought. Gone is that upper-class languor,...

By PAUL F. JENNINGS I AM very glad that my first road accident was in France. The French seem to take more kindly to my car, which is a 1928 Austin 7 called UB, than do my...

By HAROLD NICOLSON M R. WINSTON CHURCHILL, I have been told, regards people who keep diaries with suspicion and contempt. His argument is (so my informant assures me) that the...

IN the first programme of their three weeks' season in London, the Comedie-Francaise are giving Moliere's masterpiece of bitter comedy in verse, Le Misanthrope. Among the...

THE THEATRE " The Tragical History of Dr. Faustus." By Christopher Marlowe. (New.) FAUSTUS sold his soul and his body to the Devil in return for twenty-four years of power and...

SordtE ill-tempered and possibly ill-considered remarks of mine on the subject of Beethoven's Ninth Symphony last April brought me, most unexpectedly, letters of thanks from...

THE word paisa is not to be found in my tiny Italian dictionary ; it is a slang word, they tell me, for "ordinary folk." In the six episodes of Paisa Roberto Rossellini, its...

AFTER the three most arid months I can remember, London is blessed with a surfeit of exhibitions demanding attention. At the top of the list I must put William Scott, whose show...

This autumn season is notable for the continuance of summer in many directions. Swallows were with us when October entered, and I saw more butterflies, especially...

Severn Wildfowl Another publication that deserves public support is the

very handsome record of its work published and well illustrated for the Severn Wildfowl Trust, 8 Edwards Square, W.8, at 5s. The Trust is assisting directly with its sanctuary...

of the Trees " has already anticipated Christmas with a very beautiful calendar, illustrated with fine photographs of trees, British and foreign, and well- chosen verses. It...

Purer Rivers A newly exaggerated form of river pollution has

been disclosed in the neighbourhood of Birmingham. The water was so ill-treated by one industrial output that it became unfit for use in another industry. However, there are...

In My Garden A host of new varieties of the

aster we call Michaelmas daisy have been shown this year, and they suggest how easily the plant may be grown from seed, always with the possibility of a new and gracious...

Sm,—Mr. C. W. Orr's letter is typical of the complacent

attitude charac- terising most Press notices of Dr. Fu rtwangler's recent Beethoven festival in London. Referring to Furtwangler and Bruno Walter, he writes: " It may well be...

THE FUTURE OF SOCIALISM

The Gathering Storm, says " the final verdict of history may well be far less severe on the democratic leaders who failed to stand up against the prevalent illu- sions than on...

LETTERS TO THE EDITOR 44 THE CHURCHILLIAN EPIC "

Sm,—In the interests of historical accuracy I must express my dissent from the impression conveyed by the concluding paragraph of Mr. Amery's review of Mr. Churchill's book. No...

Stn,---In your issue of October 8th, " Sergeant " of Singapore complains that the response of 75 per cent, of his fellows (mostly national conscripts) to all attempts to lure...

Sta,—Readers of The Spectator will hardly have forgotten the service

which Mr. Paul F. Jennings rendered to the cause of philosophy in introducing to the British public the ideas of M. Pierre-Marie Venue, the gifted expositor of resistentialism....

SIR,—May I add my closing word to the present discussion

on "Europe's Refugees " in your columns. It is essential to distinguish between the humanitarian claim advanced in my letter of September 17th, and political claims involving...

SIR,—A point which no one seems to have mentioned regarding the Russian demand for a reduction in armaments is that even if everyone disarmed totally peace would not be assured...

THE HUNT AND THE TRAP

SIR,— General Wingfield thinks that because I state a fact I of necessity approve. He claims that the fox has the greatest vested interest in foxhunting. The fox has not yet...

A BOMB IN THE POCKET

Sut,—Dr. Jacks asks, "How is it possible for two parties to negotiate on a basis of mutual confidence and to co-operate in that spirit, if one has an atomic bomb in his pocket,...

Sta,—Your readers may or may not agree that the Pre-Raphaelites " must always appear, to any person of normal sensibility, as utterly lacking in taste," or that they are " the...

SIR, —Surely Mr. Derek Patmore in his delightful article on the Pre- Raphaelites is hardly correct in describing the movement as a " tragedy." As a matter of fact, Mr. Gaunt in...

Sta,—Some 500 German students are now in this country, helping with the harvest, and will be staying in harvest camps in Nottinghamshire, Oxfordshire, Lincolnshire, Lancashire,...

SIR,—I am a woman in the 'fifties and belong to about the same genera- tion as Mr. Nicolson and certainly, alas, to the generation which Miss Langford Dent condemns. My husband...

SIR,—The remarks of Janus on fish-fryers and controls are interesting but not quite correct. The new licences to be issued are for new districts or new customers. The...

TO ENSURE REGULAR RECEIPT OF THE SPECTATOR

readers are urged to place a firm order with their newsagent or to. take out a subscription. Newsagents cannot afford to take the risk of carrying stock, as unsold copies are...

Existentialist Philosophies. By Emmanuel Mounier. (Rockliff. 15s.) ON the dust-cover a this book there is a family-tree of Existentialism. Socrates, the Stoics, St. Bernard and...

Talleyrand, the Diplomat Talleyrand. By Louis Madelin. Translated by Rosalie Feltenstein. (J. Rolls. 18s.) M. MADELIN disapproves of Talleyrand. This is not original. He was...

The New India. By Sir Atul Chatterjee. (Allen and Unwin. 8s. 6d.) IN 1911 the late Sir Thomas Holderness, Permanent Under-Secre- tary of State for India, contributed to the...

Across the Wide Missouri. By Bernard De Voto. Illustrated with Paintings by Alfred Jacob Miller, Charles Bodmer and George Catlin, with an Account of the Discovery of the Miller...

8s. 6d.) THOSE who read Mr. Stuart's pre-war novels will remember them for their high literary quality and perhaps for their atmosphere of romantic unreality which debilitated...

MR. HILL, who is an Eton master but not an

Old Etonian, writes about his adopted home with the inquisitive enthusiasm of a convert. His book is mellow and sensible, partisan and anecdotal, and if at times the funny bits...

National Trust Guide : Buildings. By James Lees-Milne. (Botsford. 7s. 6d.) Tins little book is a selection of Trust buildings " which deserve at the moment a special visit and...

THIS is a book of magnificent photographs (chiefly taken by the Regent Street Polytechnic School of Photography) of the first residential school for cripples which combined...

By CUSTOS . ONCE again those investors—and they are the vast majority—who have refused to be panicked out of good stocks by the crisis over Berlin are being vindicated by the...

Margaret McMillan. A Memoir by D'Arcy Cresswell. With a Fore-

word by J. B. Priestley. (Hutchinson. 10s. 6d.) " HE can rise to the level of his subject," Mr. Priestley says of the author of the new life of Margaret McMillan. Many readers...

THE SPECTATOR " CROSSWORD No. 499 [A Book Token for

one guinea will be awarded to the sender of the first correct solution of this week's crosstaSrd to be opened after noon on Tuesday week October 26th. Envelopes must be received...