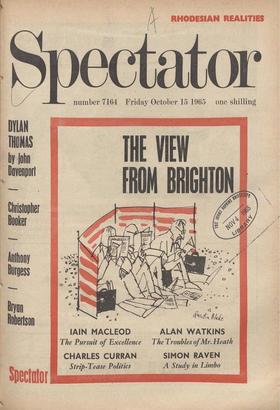 E YEN though he has left it so late, the Prime Minister has done well to recog- nise the terrible possible consequences of a Rhodesian UDI. He has thrown the Rhodesian...

Portrait of the Week--

MR. IAN SMITH WAS HAPPY to be back in 'God's own country' after his confrontation with Mr. Wilson: but there was no happiness about Rho- desia elsewhere, and her problems...

THE PRESS Leave It to Smith?

CHRISTOPHER BOOKER writes : As expressions of Tuesday optimism rWe had a very constructive talk. . . . I think we have got further forward . . . we may even surprise you') gave...

SOVIET UNION OK With No K? DEV M URARK A writes from Moscow: A year without Khrushchev has turned out to be a year of both innovation and consoli- dation. The Soviet leaders...

Sunday in Saigon LUDOVIC KENNEDY Kennedy : The Sorensen Version IAIN MACLEOD One year's subscription to the 'Spectator': ‘ 13 15s. (including postage) in the United Kingdom...

Big Benn By DAVID ROGERS U NDOUBTEDLY this was the headline that the Postmaster-General was after. 'The Post Office Tower symbolises twentieth-century Britain in much the same...

In the ultimate transcendence, Ian Smith, Will you plump for Independence, Will you, Smith? When the fortunes of Rhodesia Grow demonstrably fainter, Would it really make things...

The Troubles of Mr. Heath By ALAN WATKINS ° AND does God exist?' asked someone of IABishop Wilberforce after a famous nine- teenth century debating society had considered the...

The Pursuit of Excellence

By LAIN MACLEOD I T is a weary chore to find a new title for a party political pamphlet. Most of the good ones have been appropriated, and one has to ring the changes on...

By CHARLES CURRAN, MP B RITAIN used to be a pyramid society. The ruling few were at the top, and the money- less masses at the bottom. We are turning into a diamond society,...

The thanks offered to Lord Crawford, the re- tiring chairman, at the National Trust's annual meeting later this month, will be sincerely meant. For twenty years he has been the...

I HAVE been reading Dame Edith Sitwell's auto- biography. I like much of her poetry, and most of her criticism, although I find her relent- less dissection of words somewhat...

During his visit to London Mr. Tan Smith showed himself to be a curiously effective advo- cate on the television screen, and one must believe that his appearances have had a...

I envied Mr. Wilson and Mr. Maudling their daY at

Birkdale, although I expect I saw more of the play from my study. I suppose it was the triumph once more of hope over experience to expect us to win the Ryder Cup with our...

Cuban Mysteries It is very hard to tell what Fidel

yearling sales is an agreeable pastime. So Is long-range political forecasting. It is this that a dds interest to Mr. Heath's promotions to the t r°11 t bench, and also adds...

A PLACE IN MY MIND

Brighton A Study in Limbo By SIMON RAVEN r‘NCE upon a time there was a famous transit kf camp in India, and it was called Deolali. It was comfortably ordered and there were...

The Clash at the Vatican Council

By CHRISTOPHER HOLLIS n or.: JOHN XXIII won for , himself so large r a volume of good will that there was high enthusiasm when he called for a General Council to give to the...

A Settlement In Europe By KEITH KYLE HE conclusion to be drawn from any realistic I defence review must be that Britain cannot undertake open-ended duties all over the world....

SIR,--Who would have thought that my little burst of grapeshot would call up such a prolonged fusillade of heavy artillery from Randolph S. Churchill! May I now use a little...

Sell up the London Jails?

SIR,—Mr. George Hutchinson wishes to realise some of the land now used by HM prisons in order to increase the supply of urban land in London avail- able for housing. As for the...

The Public and the Proms

SIR,—The Spectator inquiry into the Public and the Proms has created much interest, but to me the results seem fairly predictable and can be analysed as follows. Divide the...

Croesus in a Crumpled Suit

Sts,L - Mr. Christopher Booker's critical judgments may be beyond cure but you might get him to verify his references. He says of Russell Braddon's biography, Roy Thomson of...

SIR, -- Alan Watkins ' s anticle 'Capturing the Centre' P r ovides a most succinct analysis of the Conservative p ‘ L artY's problem in finding a new identity. And from ' I...

slit,-1 have just read Watchman ' s paragraph headed `Conference Town' in the Spectator of October 1. It is true that at Blackpool the conference hall can house the Conservative...

SIR, — Hilary Spurling ' s review of the Gielgud lyanov is surely a little unfair to one of the actors, Mr. Richard Pasco, in blaming him because he portrayed Chekhov ' s 'Dr....

t I racula's Wife S i,,It•-"I would like to include in a series

of bio- V r Phical studies, Florence Balcombe, who married am Stoker, author of Dracula. A portrait and e ddies of correspondence, together with details of addresses re sseb...

Stu,--Eyre and Spottiswoode's first Read-in Viet- nam seems to have made its point. The Daily Worker criticises it for containing too much pro- American material, Quoodle in the...

Immigration, and the Parties

SIR, In my letter which you so kindly printed last t tcelk. unfortunately made an error with regard to r venue of the Civil Liberties , meeting on race r elations in Brighton on...

Art and Showbiz-2 By BRYAN ROBERTSON AN imperfectly formulated exhibition has jAnegative repercussions that extend beyond the particular occasion: like a book which fails to...

Every Week in the Year . As a reader you may have the Spectator sent for a year to your friends, in any part of the world, as your Christmas or New Year Gift for almost half...

The Old Adam Roused H ORSES for courses, cattle for country, Russian orchestras for Russian symphonies, English orchestras for English ones and so on across the UN spectrum....

BOOKS A Green Man from the Sea

By JOHN DAVENPORT E E was,' said the villager walking with Louis MacNeice and myself away from the Laugharne churchyard twelve years ago. 'he was a very simple man.' He was...

IDLING through this batch late at night, I sud- denly sat up and listened. A poem had jumped from the page. It's called 'Solstice Weather' and I wish I could quote it in full....

Collected Poemi 1965. By Robert Graves. (Cassell, 42s.) ROBERT GRAVES is an anomaly—a lyric poet gifted with a flawless ear, yet also one who reads his own verse as if it...

The Prince in the Heather. By Eric Linklater. (Hodder and Stoughton, 25s.) To anyone who has waded through the numerous and somewhat conflicting accounts of Prince Charles's...

The Holm Oaks. By P. M. Hubbard. (Michael Joseph, 21s.) A house close by a brooding, silent wood, and a vast sweep of empty beach, grey. sky, grey sea, set the scene for an...

The Egyptologists. By Kingsley Amis and and Stoughton, 21s.) A Suspension of Mercy. By Patricia Highsmith. (Heinemann, 21s.) Alms for Oblivion' is as good a name for a...

By DAVID FOOTMAN I N 1953 Mr. Sweet-Escott thought of writing a history of the Special Operations Executive. When denied access to the records, he decided to put down his own...

Money and Aid By NICHOLAS DAVENPORT s the Minister of Overseas Development said in her excellent guide-book to aid: 'Since several major donor countries face balance of...

By CUSTOS 9 - 10 a distressed Throgmorton Street, im- I poverished by the lack of business, the £54+ million bid for LEWIS'S INVESTMENT TRUST comes at an opportune time. Mr....

By LOTHBURY F OR the eighth successive year Hallmark Securities has made a record profit for the year ended April 30, 1965. The interim dividend was increased by 21 percent...

Another Part of the Forest By STRIX i s ‘ It is always a comfort to human beings to be able to rationalise their misfortunes—a man whose house burns down, for instance, feels...

By LESLIE ADRIAN Mr. Roth is a keen advocate of solving car congestion by putting a high price on standing still, acid he has a strong point. The Buchanan Report has posed the...

By ALAN BRIEN Tun other morning — I knew, even at the very bot- tom of the well of oblivion, that it must be around 2.30 a.m.—I felt some gigantic, superhuman, monstrous force...