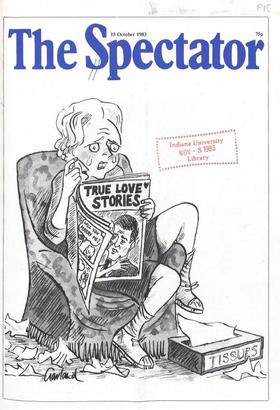 M r Leon Brittan, the Home Secretary, did much at Blackpool on Tuesday to make up for the unconvincing and even ir- responsible speech on capital punishment which he made to the...

Begetting on the side Charles Moore Blackpool Q ir Russell Sanderson, the chairman of L./the Executive Committee of the Na- tional Union of Conservative and Unionist...

F or the past few days people have been pleading with me to exclude any references to Cecil Parkinson from this week's Spectator. They appear to feel that the Spectator should...

Never the twain shall meet Auberon Waugh A picture from last week's Labour conference haunts me. It appeared in Friday's Daily Express and showed Neil Kin- nock in the midst...

Alexandra George recently in Iraq T here are two ways of reporting a war. Dispatches from the front can describe a tactical encounter yet still project the Wider background —...

Big boss to the pig-box

Murray Sayle .Tokyo K orean assassinations, atom bombs and even the trade surplus are far from Japanese minds this week. The news has been dominated by an event closer to...

The Spectator is offering a special student rate for a 38 week subscription — to cover three academic terms and two short vacs. — for only 110.95 — giving students a saving of...

Andrew Brown Stockholm D ynamite may do more damage, but the .1.-leffect on morals of the Nobel Prize awards is scarcely less spectacular. Think of the dissension that can be...

The Fields of the Wood

Roy Kerridge Cherokee County, North Carolina will not give sleep to mine eyes, or 1 slumber to mine eyelids, Until I find out a place for the Lord, an habitation for the mighty...

Richard West T he two basic duties of Margaret Thatcher were to abolish the trade union closed shop and to restore the old county system of local government. She funked the...

What can we afford? Jock Bruce-Gardyne I t looks as if the annual battle about public spending may be as tense as it was in 1980 (when the Treasury bit the dust, in-...

The Standard publishes a letter from a correspondent at Colombo, stating that on September 5th, 'We witnessed a very extraordinary phenomenon on Sunday, about five p.m., when we...

The Tory PR disaster Paul Johnson T he Thatcher ministry is, by modern British standards, quite an efficient government. It is curious, therefore, that it should be so...

Sir: Mr Auberon Waugh is faced with the task of venting his spleen in your columns each week: in your issue of 24 September he chose to attack Action on Alcohol Abuse (AAA)...

Sir: What frisson, down here in the sticks, to see my name in your instructive and amusing journal — and for your reviewer, Christopher Hawtree (17 September), to place such a...

Poor old Ireland Sir: One has rarely read in your journal such a pejorative mish-mash of distorted facts and innuendo as is contained in Sheila Lawlor's article entitled...

Sir: I wonder if you would be kind enough to allow me to reply briefly to some of the correspondence that my letter about stubble burning has provoked in the Spectator?...

William for ever Eric Christiansen T thought that William was dead. His 1 creator, Richmal Crompton Lamburn, kept him alive for 47 years by writing 37 books about him, and by...

James Michie I Wouldn't have Missed it Ogden Nash (Deutsch £9.95) O gden Nash, who died in 1971, was an original and quintessentially New Yorkerish entertainer. Like Larry...

A joy to read

Nigella Lawson Babies in Rhinestone Shena Mackay (William Heinemann £7.95) S hena Mackay has a genius for diag- nosing the ills of modern living. Her ter- ritory is a world of...

Terence de Vere White Scenes from Later Life William Cooper (Macmillan £7.95) I n the art of concealing art William Cooper needs no instruction. A newcomer to his work is...

Ian Hislop Out on a Limb Shirley Maclaine (Elm Tree Books £8.95) T his book was published in the United States just before the General Election and news flashed across the...

Underneath the archness Peter Ackroyd Zelig (PG', selected cinemas) T he film begins, as all good documentaries should, with a ticker- tape parade in New York in the late...

Overbalanced? Maureen Owen T he famous balance required by the BBC charter means that at worst, it can effectively neutralise any idea, however interesting. At best, balance,...

Decent Taki New York T missed all the fireworks because I left London two weeks ago. I guess I was lucky for once. In the mood I was in I don't think I could have endured a...

Hothouse Richard Ingrams p erhaps with the arrival of cable tele- vision coming ever nearer, the BBC and ITV are about to embark on a campaign to show that they are both...

Rum do Jeffrey Bernard B arbados was very much as I left it three years ago: 80 degrees in the shade, humming birds for breakfast companions, the surf whispering along the...

Winners P. J. Kavanagh T he Irish are always accused of having long memories because they remember the behaviour of Cromwell at Drogheda, and similar outrages. The English...

No. 1291: In other words Set by Jaspistos: You are invited to provide a rough resume of the plot of a Shakespeare play such as might have been attempted by (a) Mr Jingle (b)...

Jaspistos reports: Competitors were asked for a strait-laced letter, fraught with moral advice, from a son or daughter to a parent, now or in the past. The picture I had in...

A prize of ten pounds will be awarded for the first correct solution opened on 31 October. Entries to: Crossword 629, The Spectator, 56 Doughty Street, London WC1N 2LL. 1 '...

Llargesse David Spanier S ir Jeremy Morse, chairman of Lloyds Bank, is a keen problem composer. Such a predilection in the head of the bank does not, of course, explain...

Spectator Wine Club Auberon Waugh I ri the run-up to the Christmas season, cone's thoughts naturally turn to the Plight of the poor. Groan, boo, go back to Russia. I will...

°The Secretary of State for Trade and Industry, Mr Cecil Parkinson, an- nounced that his former secretary, Miss Sara Keays, was expecting his baby in January. He had given her,...