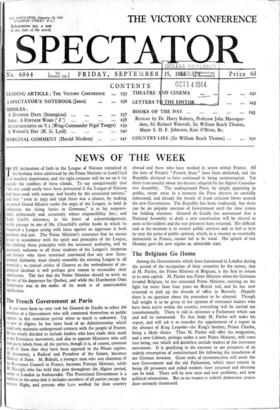 HE declaration of faith in the League of Nations contained in the birthday letter addressed by the Prime Minister to Lord Cecil is of manifest importance, and the right...

Among the Governments which have functioned in London during the period of the occupation of their countries by the enemy, that of M. Pierlot, the Prime Minister of Belgium, is...

The French Government at Paris It can have been no

easy task for General de Gaulle to select the members of a Government who will commend themselves to public opinion in this transition period when so much is unknown. Up to now...

A golden opportunity to secure a valuable invisible export will be lost if steps are not taken to satisfy those thousands of foreign tourists who will be anxious to visit...

VI, the flying bomb with which " southern England," especially London, has been too well acquainted during the summer months, is now a thing of- the past, though V2 is quite...

Labour at the General Election

The National Executive Committee of the Labour Party has recommended the party to fight the next general election as an independent political force. This is undoubtedly what a...

The Revolt in Slovakia

Amid the sauve qui peut of these various satellites the rising which has been in progress in Slovakia, the most southerly of the four provinces of Czechoslovakia, since the...

A situation favourable to the Allies is developing swiftly in the Balkans, accelerated by Bulgaria's submission, made ignominious by the twists and turns by which she attempted...

ITTLE news has so far emerged from what has been happily termed the Victory Conference at Quebec. That is inevitable ad right. What is known is that the discussions are largely...

Nothing could be better than the appointment of M. Rene

Massigli as French Ambassador in London. Indeed, his claims to that post are so obvious that, once it was announced that M. Bidault was to be Foreign Minister in the...

Some one (I disclaim both the credit and the cavil

the quotation may deserve) calls attention to the remarkable prescience of W. S. Gilbert, who, with 1944 obviously in view, included in his Pirates of Penzance a song...

The practice of adding to per cent. to hotel bills

instead of tips has never become as general in this country as on the Continent, but there seems to be good reason now why it should be made not only general but compulsory....

Mr. Pethick-Lawrence raised an interesting and important ques- tion in

a speech he made on the future' of Europe at Guildford on Sunday. It is not a new question ; the Atlantic Charter spoke of it, though rather with two voices. The form of...

The reception given by the Overseas League on Tuesday to

welcome Sir Evelyn and Lady Wrench home from an Empire tour which has lasted exactly four years was robbed of no little of its attraction by Lady Wrench's absence through...

T HE fact that Lord Cecil reached his eightieth birthday this week must not pass unnoticed, for it serves to focus attention for a moment at least on a unique public figure. (So...

I am able (as every self-conscious journalist loves to say)

to throw important light on the future of a historic British Posses - sion. It has always been said that when the Gibraltar apes, W ith which every visitor to the Rock is...

By STRATEGICUS HUNDRED days of the offensive in the west were completed A on Wednesday. The impatience which blinds us to actual achievement cannot be prof against a...

By ' I N an article which I contributed to The Spectator of August 18th I offered a suggestion, the adoption of which would, I feel sure, help in some measure towards the...

By WING-COMMANDER NIGEL TANGYE D URING the first days of the flying-bomb attack on this country comment was made on the futile conception of the attack. It was Hitler's last...

DEATH OF A CONSCRIPT

The fowler Death hath snared me. I was young and much afraid. What did I owe to England? I know not, but I paid. PERCIVAL HALE COKE.

By H. G. L1 ALL A T present there are six in the family, the parents, two school children of opposite sex, an elderly friend who makes her home with us, and a neighbour's boy...

I confess to a childish regret that our transition from

darkness to light is to be so gradual. I had looked forward to the night when all the windows of London would be suddenly uncurtained, and when one could gaze into the club...

I look back to that Friday night of September I,

1939, when the . lights went out in London. We had been told that the black-out had been decreed, but we had expected only some diminution of lighting ; it was with astonishment...

What I like about Mr. Morrison is that he knows

that the British public have come to love their double summer-time, and that the moment when the extra hour is taken from them is a moment of gloom. Already he had granted us a...

The end of darkness, however usual it may seem to

us a week from now, does, in fact, symbolise a change of deep significance. There are those who will see in it the presage of an early peace ; I do not wish to chill their...

HAROLD NICOLSON O N Sunday next, the day after tomorrow, Mr. Herbert Morrison, with his magician's 'wand, will both diminish and increase our darkness. Mr. Morrison is a humane...

For M. AT the sea's kerb, at the wide Turn of the dune The burnet rose Grows in its green Ravel of leaves like seaweed, White as bare flesh When the bright June sun Flows in...

" An American Romance." At the Prince of Wales.—" Wing and a Prayer." At the Odeon. THE war has put a curious restraint on Hollywood script-writers. Although American studios...

" Arms and the Man." At the New Theatre.—" The Banbury Nose." At Wyndham's. THE Old Vic new repertory company, after giving the best produc- tion of Peer Gynt London has seen...

THE RE-EDUCATION OF GERMANY read Professor Gilbert Murray's stimulating article on Professor A. Wolf's book with deep interest. But I just cannot help feeling that Professor...

Six,—We all want a permanent peace in Europe, and there

can be no Peace until the _Nazi-regime has ceased to function. I have had first- hand experience of the persecution of Germans and German Jews, and "an of my friends have been...

Stn,—The correspondence in your columns shows how any discussion of India inevitably harps back to pure politics--so pure as to have, like pure mathematics, no, relation to...

Sin,—Ignoring the sarcasm (in which I do not propose to

emulate him), may I answer Mr. 0. S. Edwardes? As he points out, I am aware of the administrative advantages of the Partition of Bengal. India's political framework is utterly...

Sut,—Sir William Beach Thomas, in his paragraphs on Country Life, quotes a judge as saying from the Bench that there is no law of tresp353 in Britain. This was true till recent...

Snt,—That the majority of your readers may be spared the irritation of reading further, I will declare at once that I am a member of that much reviled minority who dislike the...

" PUBLIC AND PRIVATE ENTERPRISE " SIR,—In a letter to

you so headed, Miss Casson, contrasting the regular " on time " publication of The Spectator with its delayed postal delivery, does, I fear. less than justice to the magnificent...

SIR,—I wonder whether Mr. Harold Nicolson would accept an emenda- tion of one sentence in his admirable article in last week's Spectator and allow it, instead of reading "Those...

SIR,—As one who has taught in two Public Schools, two Grammar Schools and four Private (Preparatory) Schools, and who has also been a Manager of Elementary Schools, may I...

Stn,—In his review of my little book Problems of the Peace Sir Frederick Whyte observes (in regard, I think to himself as well as me) that "di ! experience of those who now...

SIR,—I trust you will pardon my intruding on your very precious time with the request to publish the following extract from a letter which I have recently received from a friend...

OOKS OF THE DAY

Sophoclean Tragedy. By C. M. Bowra. (Oxford University Press. 2os.) THE Warden of Wadham has written a serious and solid book in which by a study of the seven extant plays he...

Last Flight from Singapore. By Arthur Gerald Donahue, D.F.C. (Macmillan. 8s. 6d.) Two books on the fall of Malaya have been written by young engineers, both of them books...

Pipeline to Battle. By Major Peter W. Rainier. (Heinemann. los. 6d.) MAJOR RAINIER'S is the best book that has yet come out of the campaigns in Africa. His success is due to the...

produced little volume contains 14 short Poen" by the late Major Hore-Ruthven and a portrait of the author, along with a preface by Lady Gowrie, the poet's mother, and bri...

Yeoman's Hospital. By Helen Ashton. (Collins. 8s. 6d.) Miss HELEN ASHTON appears to know the medical profession, and hospital life, right from the inside ; and when a subject...

Education in Britain. Edited by R. A. Scott-James. (Muller. 6s.) This book was originally written for such friendly countries al the United States and Latin America, and so has...

SOLUTION TO CROSSWORD No. 286 SOLUTION ON The winner of

(A Book Token for one guinea will be awarded to the sender of the first correct solution of this week's crossword to be opened after noon on Tuesday week, Stptember 26th....

The brown squirrel is, I think, multiplying again after some very lean years. A melancholy corroboration has been recorded in my neighbourhood, where no brown native squirrel...

DWELLERS by the Chiltern rivers, such as the Mimram, lament the disappearance of their upper reac hes. Others by such rivers as the Lea and Gade lament their pollution and the...

enjoying a light book of this kind one must lay aside the irrelevant fury inspired by remembering how many better books are lying out of print through lack of paper, how many...

A landworker new to the particular district has come upon an eloquent example of what has been called " the tyranny of the chain." Most of our land measurements, as well as our...

Philosophical Commentaries. By George Berkeley, edited with intro- duction and

notes by A. A. Luce. (Nelson. 3i gns.) THESE are the contents of the two notebooks in which Bishop Berkeley almost systematically jotted down his thoughts, sometimes known as...

In My Garden In a very interesting discussion going on

among gardeners and biologists it has been suggested that the growing by Continental gardeners of radishes, carrots, lettuces and cauliflower in the same frame is an example of...