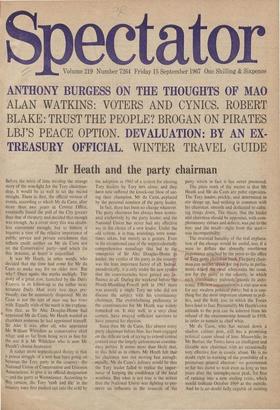 Mr Heath and the party chairman

Before the mists of time envelop the strange story of the non-fight for the Tory chairman- Ship, it would be as well to set the record straight. There is, first, the official...

Last week, this journal conspicuously failed to join in the chorus of abuse heaped on the Government for allowing an increase of 10 per cent or more in electricity prices. Alas,...

Enoch Powell is going into hospital for an operation on his foot—the opportunity will be taken (said Conservative Central Office) to remove traces of tonsil. For the party it...

POLITICAL COMMENTARY ALAN WATKINS 'There's a poster round the corner saying "Up Lane" and, do you know, someone has scrawled something rather rude underneath it,' said Mr David...

CHRISTOPHER HOLLIS Anglican clergymen, anxious to attend the university Boat Race, have protested against the BBC's suggestion that it be rowed on Sunday so as to avoid a clash...

ADEN D. C. WATT Only a remarkable reversal in the present con- stellation of forces will save British policy in Aden from a total disaster. The magical ele- ment involved in...

AMERICA-1 MURRAY KEMPTON New Yopk—The stirrings of our politicians from their summer languors seem largely to have risen from the duty to seem active when there was no way to...

AMERICA-2 DOUGLAS SKELTON Washington—Getting out of a major war is like devaluing your currency: you don't go around beforehand telling everyone you are going to do it. On the...

D. W. BROGAN I am entertained by the lavish use of the word `pirate' in common speech and writing today. I see that at the Trades Union Congress the self-employed building...

DEVALUATION In Britain we believe in tradition. There is even a ritual date for D (for Devaluation) day : the third Sunday in September. There are even some who go as far as to...

CENTENARY TIBOR SZAMUELY Not very many people can have actually read Das Kapital in the hundred years (this week) since its first publication: it is one of those books which...

DONALD McLACHLAN No one, so far as I have noticed, has pointed to the real cause of Mr Greville Wynne's de- cision to expand in a book and in the News of the World the account...

TELEVISION J. W. M. THOMPSON It is a truth universally acknowledged, that a television channel in possession of a good for- tune. must be in want of a serial. And so. in-...

Thoughts on the Thoughts

PERSONAL COLUMN ANTHONY BURGESS I have at last discovered the ideal book for a journey. Yes, you're perfectly right: not Mar- cus Aurelius, Machiavelli, a Shakespeare play or...

From the 'Spectator, 14 September 1867 --12fficis Household Suffrage puts into the House of Com- mons at least a few genuine working-men, to represent the real beliefs, wishes,...

JOHN WELLS One of the most fundamental mistakes made by travel writers, it seems to me, is that they still believe we are interested in reading about something 'different.' In...

CRUISES GEORGE STUART Each year nowadays brings an increase in the number of people who take a winter break in the sun. This winter may see a pause: because of those damned...

CARGO-BOATS MADGE GARLAND Cargo-boat travelling sounds as if it were under- taken more to please the pocket than the passen- ger, which could be the case unless the latter has...

WINTER SPORTS HELEN MASON The Scots, having tempered all the old frivoli- ties with guilt and prohibitions, have a rightful suspicion of new ones. And how else but frivo- lous...

ROBERT BLAKE The Reform Act of 1867 was likened by Disraeli to Milton's `Serbonian Bog.' But the historiographical difficulty is not so much that armies whole have sunk in it...

MARTIN SEYMOUR-SMITH This interesting collection of essays, linked by autobiographical accounts of the author's 'vary- ing self-adjustments' to the problems that con- front...

DEREK PATMORE Recent events in Nigeria and the Congo must make any reader of this first English life of ' Christophe, King of Haiti, think that there are some interesting...

NED SHERRIN Cole Porter started writing 'thirties songs in the 'twenties and he continued to do so through the 'forties and the 'fifties. When he died in October 1964 after...

CINEMA Big shots PENELOPE HOUSTON Every Young Man (Cameo Poly, 'A') For once, the publicity gets across something of the flavour of a film. An evening paper advertisement for...

The Merchant of Venice (Haymarket)

THEATRE Merchandise IIILARY SPURLING Futz and Melodrama Play (La Mama 'froupe at the Mercury) It is years since London has seen anything quite like Messrs Tennent's The...

To opt or not to opt ? MONEY

NICHOLAS DAVENPORT In the faraway days of the 1964 election—what a painfully long three years of financial crisis it has been!—Labour promised cheaper mort- gage loans for...

CUSTOS The ici interim report having pleased the bulls, though not satisfied the cynics, it was only natural for the market to boil over and wait for a fresh lead. It did not...

CONSUMING INTEREST LESLIE ADRIAN On the very eve of a motoring, trip through France, some summers ago, I had the mis- fortune to be invited to four drinks parties. Misfortune,...

Sir: I read J. H. Plumb's lament with much interest

and growing sympathy. My particular interest in historical demography and the applica- tion of the methods of computing science to his- torical and demographic studies have...

The significance of Mr Crosland

Sir: On the front page of your issue of I September you make a reference to Dr Thomas Balogh which. might be interpreted to mean that he could find some personal advantage in...

Sir: It is a pity that Michael Watts's exposition of the problems presented by our increasing popu- lation (8 September) is marred by his failure to produce practicable answers....

Sir: Dr T. H. Plumb'i views on history, historians, and the role of both in modern society have be- come widely known over the last few years, especi- ally to readers of the...

Sir: It is hoped that the referendum in Gibraltar will inaugurate a new era in international relations. Whenever there is an international dispute concern- ing land (and this...

Sir: As a non-consumptive means of passive re- laxation, may I recommend to Mr Adrian that he services himself, for free, with the International Sub- scriber Dialling number 010...

Sir: 1 agree with what R. A. Cline has to say (1 September) and hive always felt that the appro- priate tribunal for planning appeals is the local county court. The judges and...

Sir: I am glad Mr Pendlebury (Letters. I Septem- ber) shares my views about the 'Queen Mary' and the 'Aquitania.' I didn't mention the 'Mauretania' mainly for reasons of space....

HUGH ROSS WILLIAMSON Christians believe that the world had a begin- ning and will have an end. This apparently obvious statement is not as simple as it seems, for the belief...