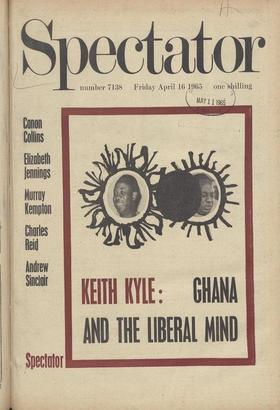 — Portrait of the Week-- JUST AS HIS INCOMES POLICY received

an official go- ahead, and was rebuffed by five unions in the first week, Mr. Brown found the strain of 'tiredness' too great, and was ordered to rest after Easter. His Shadow,...

M R. CALLAGHAN'S sturdy defence of the pound has been the one bright point in a cheerless week for the British economy. The trade figures published on Tuesday have shown that...

MICHAEL SELZER writes from Jerusalem: Jerusalem is a metaphor as

well as a geographi- cal location; and the meaning of that metaphor --purifying, holy, challenging—is inescapably present in the town itself. Jerusalem itself is a very quiet,...

Johnson's Sixth Sense MURRAY KEMPTON writes from New York: It is Mr. Johnson's habit to talk the same way about cases where the morality is, to say the least, complicated as...

Crisis in Gibraltar ANTHONY BURGESS • The Two Faces of V. I. Lenin GEORGE KATKOV Otte year's subscription to the 'Spectator' costs , £3 5s. (including postage) by surface...

Oh weary, weary grinds the crunch Of business chairmen chewing lunch. Though all must come to lunch, one finds They are of two distinctive kinds. Bright, laughing, red of face...

Thoughts on the Race Bill By ALAN WATKINS The country is good for those who possess it, and too bad for others to be at the charge to conquer it. The air might be wholesome...

By CANON L. JOHN COLLINS T MUST admit that I am disappointed. As a 'Christian Socialist, I joined the Labour Party because I supposed that, if in power, it would try to apply...

GHANA AND THE LIBERAL MIND

Or, Was the Readiness All? By KEITH KYLE C't itsfcE self-government, Ghana has had sym- k3bolic importance as the first Black African colony to become a state. Arguments which...

Indoor Games I'm sorry I shall not be going to

Houston. Murray Kempion tells us that the local baseball team is no longer playing its matches out of doors. This summer Astros will play all its home games in a stadium covered...

I FEAR that the Government's Race Relations Bill is a piece not so much of legislation as of political skywriting. Everyone of course under- stands and respects the idealism of...

King Willow Spring, and warmth, and my membership card for

the Oval, arrived together one day last week. By the time you read this I will be in America, and by the time I return from a short visit cricket will be here again. This year...

Spring Cleaning One would think that the advantages of going

to an agency for a cleaner are that they would always send someone competent and that come sickness or disaster or any of the other things that seem to keep cleaners away...

In two respects I find the budget has left a feeling of distaste which has nothing to do with political disagreement. To take the lesser matter first, I think there is a...

SIR, —You have said, qua ()noodle. that although you detest my ideas you will defend to the death my right to express them. I will take you at your word—not literally, but...

Slit,—Allen Tate's 'peroration' on Appomattox was a breath bf fresh mountain air after the many dull sociological studies which have been published on racial conditions in the...

SIR.—In his rather jolly account of our telephone conversation. Mr. Alan Brien forgets to mention my telling him—quite clearly—that I did not wish Norman Mailer's An American...

SIR,-111 is dangerous as well as stupid nonsense to say, as Miss Gainham does from her observation post in darkest Bonn, that 'nobody on the continent takes Britain seriously,'...

SIR,-1 am astonished that such a responsible journal as the Spectator should publish without proper sub- stantiation such an allegation as that in your issue of April 2 last. A...

SIR,—We have now—recorded on the occasion of Labour's sit-up strike against Mr. Ncave's Bill to pay the old-age pension to men and women of an average age of eighty-four, who...

'Frau Majolica' and Friends By CHARLES REID A vi Lit their first joint production at Covent IAGarden in 1920, when mankind hadn't really begun to fathom Puccini, the three...

CINEMA Not in the Book

The Greatest Story Ever Told. (Casino Cinerama Theatre, `IJ' certificate.) A A BOY at a school I know of drew a picture ,.not long ago of the Flight into Egypt. Jesus, Mary and...

Thoughts After Wembley E el "ENGLAND'S heroism in the second half in due honour. But what about the other side of the picture? Scotland failed depressingly against a side of...

BOOKS Prophet of the Apocalypse

WE are lucky indeed that Dame Edith Sitwell completed her autobiography shortly before her death. In many ways, it is a unique book : a series of witty remarks about poetry,...

The Green Felt Jungle. By Ed Reid and Ovid Demaris, (Heinemann, 25s.) The Big Wheel. By George W. Herald and Edward D. Radin. (Hale, 18s.) NOT until deposited in a barrack-room...

Waiting fa the End. By Leslie A. Fidler. (Cape, 30s.) LESLIE FIEDLER, former enfant terrible of American criticism, has done it again with his latest, Waiting for the End. This...

Living with Mr. Callaghan By NICHOLAS DAVENPORT Min! popular idea of the City is a square mile of top-hatted capitalists waddling from one expense-account lunch to another. The...

By LOTHBURY B RITISH WAGON pursues its policy of con- tinued expansion in extending its interests into Australia and into the industrial plant at home. New business increased...

By CUSTOS T HE Stock Exchange's first reactions to the budget were perhaps difficult for the layman to understand. The rise in equity prices was due to a very small amount of...

By LESLIE ADRIAN Not that there are many competing groups in the block choc business today. Cadbury and Fry belong to the British Cocoa and Chocolate Company, Rowntree seem to...

Another Part of the Forest By STR1X IF somebody told you that the average annual loss of farmland in England and Wales today was twice as great as it was in the years • before...