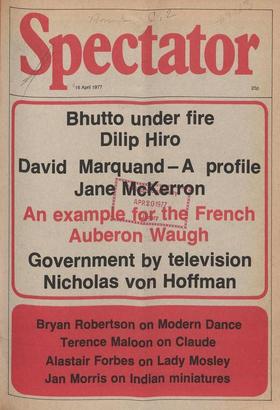 Reform and repeal—or rather reform by repeal. That would be no bad precept for any political party to follow (and they are all contemplating their electoral programmes)....

One man's conversion John Grigg When we were lunching together the other day Patrick Cosgrave reproached me for having never given a full explanation of my reasons for...

The latest to attack the Li b-Lab coalition is .Lord Beaumont. He reminds us that social i sm and liberalism are—in his characteristically ca ll) , trite words—'very different...

Spreading the rot Auberon Waugh Itiontmaur, Aude, France Escaping for a week from all the horrible things which are happening in Britain to the wild flowers and pastoral smells...

From secrecy to 'sunshine'

Nicholas von Hoffman Washington Twenty years ago in the Eisenhower - Dulles e ra the failure to reach a Soviet-American acc ommodation was automatically blamed Oil the...

Russia against the Tupamaros

Peter Kemp Last week I considered the impact of the Cuban revolution and the influence of the Catholic Church on the rise of the revolutionary Left in Latin America during the...

Steaming to the Cape

Richard West One of the pleasures (if sometimes not unmixed) of travel by train in South Africa is the chance it gives of meeting the Afrikaner half of the white population....

DiliP Niro Karachi Asitlluck would have it, the Pakistanis have en their first general election under a civi'Ian government deteriorate into the worst crisis faced by their...

A social democrat for the new Europe

Jane McKerron David Marquand, forty-two, Labour MP for Ashfield since 1966, is the latest victim of the Westminster brain drain. His bespectacled, loping presence will shortly...

Peter Paterson Dublin A few years ago Mr Liam Cosgrave, the Irish Prime Minister, could say, with just a trace of self-pity; 'In this country we have few natural resources...

Christopher Booker There is a view, so common that it must be regarded as the implicit orthodoxy of our time (admirably reflected in the recent lecture by Stuart Hampshire on...

Jeffrey Bernard One of the most horrific things about people and one that appals me is the way in which they are so easily appalled and horrified. I'm not talking about...

George Szamuely Why should Britain, with its long tradition Of political stability and where notions of liberty, justice and freedom of the individual have such strong roots,...

A chip of literary history

J. D. Scott In 1954,1 was literary editor of the Spectator. The circulation was not behaving as it should, and one day in the autumn, the editor, Walter Taplin, gave the staff...

Looking into the future

Nicholas Davenport The budget euphoria did not last long. Nor was it to be expected. Mr Healey's speech was mainly welcomed because it did not contain any further socialism,...

Sir: In his letter in defence of Le Corbusier (9 April), Mr Stephen Gardiner expresses two common reactions by modern architects to the popular dislike of their works. First,...

Sir: I wonder how many of your readers were affected in the same way as I was by Mr Tom Jackson's letter (2 April) under the title 'Unrecognised': Mr Tom Jackson, wellknown to...

Sir: I have been mulling over in my mind for the past few weeks the problem of President Amin; and a possible way to keep him from attending the Commonwealth Conference in...

Sir: The proposals that are floating around about finding the money for the Health Service by having people pay LI for a surgery visit and E2 for a home visit may make economic...

Sir: Permit me a reply to my critics. if Robert Burns prefers the word 'Scots' (1"la rl ii Wishart, 2 April) then that is good eno ug for me. If the people of Scotland have...

David Pownali The Pleasures of Deception Norman Moss (Chet° and Windus £4.95) Taking self-deception as the first of all pleasures (in agreement with Voltaire) it does not...

Benny Green The sudden revival in the fortunes of William Brown, long moribund at the back of the cupboard under the stairs, is a brutal remind' er that, like it or not,...

Variations on a theme

Jan Morris Visions of Courtly India W. G. Archer (Sotheby Parke Bernet Publications E10.00) You may be forgiven if you don't much care for miniatures; and excused if you don't...

The pantheism of light

Ter ence maioon It is a nice coincidence that two Frenchmen should have been neighbours in Rome in the mi d - seventeenth century, Poussin and Claude. Two more diametrically...

A lot of night music

Bryan Robertson When I returned to London in the winter of '75-'76 after four years in America, the liveliest and most spectacular innovation seemed to be the establishment of...

John McEwen There is no shortage of humour among artists but few of them express it in their work. Of these few, at least in Britain, Bruce McLean is unrivalled. He is a...

Ted Whitehead Strawberry Fields (Cottesloe Theatre) The National's experimental theatre, the Cottesloe, is clearly aimed at a radical young audience, because in its little bar...