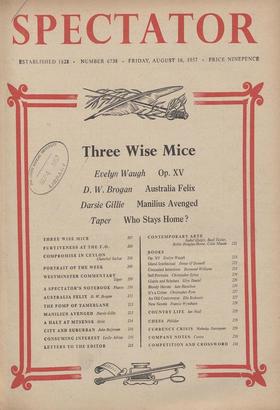 A LORD of Appeal, an accountant, and a Professor of Economics comprise the long-awaited 'independent impartial body' to review pay and prices. After weeks of rumbling and...

FURTIVENESS AT THE F.O.

S INCE the modern period of international 1 'arbitration began with the Jay Treaty at the end of the eighteenth century this country has led the rest of the civilised world in...

By CHANCHAL . SARK AR MHE Tamil-Sinhalese language problem, which I kept Mr. Bandaranaike from attending the Commonwealth Prime Ministers' Conference in London this year, is the...

WITH the fall of Nizwa and Firq the revolt in Oman seems to be over. Talib bin Ali, his brother, the Imam, and the Sheikh Suleiman bin Himyar are hiding in the hills, while...

PRINCE PHILIP dines tonight at Cowes with the Imperial Poona Yacht Club. . . . Dr. Reginald Ben- . nett. MP for Gosport and Fareham, is its Com- modore. He- was one of its...

THE LETTER in the Spectator's correspondence columns today from Mr.

Leonard Schapiro, lec- turer in Soviet studies at the London School of Economics, should be of particular interest for anyone who has been following the controversy over the...

THE Committee of Public Accounts has criticised the 'abortive expen- diture' of some £40,000,000 on the development of the Swift aircraft, originally designed as a fighter and...

IN THE Spectator eighteen months ago, Dr. Donald McI. Johnson,

MP, ridiculed the State- owned pubs in his constituency, Carlisle; they were an example, he thought, of what Professor Toynbee had in mind when he referred to 'civilisations...

I WAS AMUSED last week to see, deftly included in

the correspondence columns of The Times, a Commercial' from Mr. Val Parnell. The Times, Mr. Parnell was complaining, had 'minimised the credit due to ATV for having been the...

' SERMONS WERE PREACHED on Temperance and other Social evils.' The

quotation had been sent to me by a friend; it was culled, he said, from the Church of Ireland Gazette; in all inno- cence, when I used it the other week, I gave it that...

By D. W. BROGAN s:)NRAD has celebrated the magic of the land- I fall,, the shock of pleasure that comes to the mariner when he makes land. Airfall (if there is such a word), the...

THE APOLOGISTS for Mr. Gluck, who admitted to the Senate

Foreign Relations Committee that he could not pronounce the name of India's Prime Minister nor remember the name of Ceylon's, seem to me to have missed the best line of de-...

The Pomp of Tamerlane

The third of a series of articles on the Indian Mutiny, compiled from the Spectator of 1857. o the reader in England the situation in I mid-June must have presented a very con-...

By DARSIE GILLIE VEN if a poet has been dead for nineteen Ecenturies there is no reason why critics who do not seem to have read him should take away his reputation in order to...

A Halt at Mtsensk

By STRIX El OUR hundred and eighty miles is quite far r enough to drive in a day, and when we reached Mtsensk on our way back to Moscow we were both tired. The morning had...

By JOHN BETJEMAN F OR the hundreds of architects and surveyors who are willing to build something new, there are hardly more than a score who are will- ing to repair and, if...

By LESLIE ADRIAN TEXT to the deplorable orange-dyed kippers, n there is nothing more unappetising than the dyed smoked haddock. Swimming in its pool of yellow-tinged milk, like...

SIR,—A fortnight ago Mr. Betjeman and some friends, 'driven nearly silly by the • bumper-to-bumper traffic on the main roads, turned off at Faversham into a silence that was...

THE LIBERAL CREED SIR,—Certainly some things age ordered ill under

the present dispensation—and some things arc ordered well. They cannot be ordered as ill as all that from the Liberal point of view so long as, in Hudders- field, Bolton,...

contained a few words of commendation and a good many more of unfair criticism suffused with emotion. His letter in your issue of August 9 con- tains further baseless charges...

EXAMINING JUSTICES SIR,—As already announced in the press, the Home

Secretary has appointed a Departmental Committee under my chairmanship `to consider whether pro- ceedings before examining justices should continue to take place in open court,...

be used to claiming that defeat is vic- tory, but even in politics some degree of consistency is desirable. `Liberalism,' says Mr. Watson, writing to you as the editor of the...

SIR,—Your two brilliant correspondents have col- lided on a precedent for Dame Edith Sitwell's limitation of review copies. Now, please, will some- one disclose what critical...

SIR,—For someone who is obviously not partial to double-headed eagles, Mr. Barraclough's review of my Austrian Odyssey in your issue of August 2 was quite kindly done. I hope it...

INDIAN MUTINY SIR,—II is surely ironical that while Indian historians

should be at great pains to stress that the Mutiny of 1857 was in no sense a 'National War of Inde- pendence,' a section of the British press should be trying to raise a scare...

BING'S CROSS TO EUSTON Stn,—Surely the way from King's Cross

to Euston by train (other than Underground) would be Fins- bury Park/Dalston Junction /South Hampstead—a mere thirteen miles or so in all agdinst the eighty-five miles by the...

SIR,—Pharos seems to suggest (Spectator, August 2) that the evidence of a causal relationship between cigarette smoking and cancer of the lung is distinctly shaky. It is,...

CAVALIERS AND EGGHEADS SIR,—I am glad you have kept a

sense of proportion in your leading article 'Cavaliers and Eggheads,' and have not resorted to the ludicrous as most writers have done in attacking. Lord Altrincham for his un-...

Sut,—Mr. Edinger says he will 'unreservedly retract' his allegation that

the Green Howards 'fired on the population' of Hong Kong last October. Then in the next sentence he says they were 'called on only to stand by to keep the ring while others did...

SOME of our newspapers have recently taken to publishing pro- files and histories of famous businesses, and the present season, when those London art dealers who trade in...

SIR,—Your commentator from Westminster, Taper, refers to Mr. Philip Bell as sitting for 'some fearful hole in Lancashire.' His readers, who presumably look for information about...

AUGUST 18, 1832 THE take of salmon has been so great at Fort William this season, that the ice has been exhausted, and the fishers have had a number of horses employed in...

Hot and Sweet MEL TORMg is undeniably an accomplished singer. Not as ac- complished as Sinatra, Crosby, Perry Como or Nat King Cole. But still accomplished. It is therefore...

By EVELYN WAUGH IT is more than thirty years since Miss Compton- Burnett published her first novel and revealed to the world her brilliant and peculiar talent. If InY memory...

THIS book consists of seven essays in a modern and peculiarly English genre : what Mr. Wain calls in passing 'conversationally-styled criticism.' Yes, Sainte-Beuve had his...

OWLS The murderous owls off Malo bay Can lure a

sleepless watchman to the sea, For their deep singing may be heard Throughout a night of thunder and their red Eyes take him dancing silently Down to the choking sea-bed. Far...

UNLIKE most painters Mr. Trevelyan is lost when he writes. There is in his book none of the pre° . sion and originality in writing which often go es with the manual skill of his...

Gogmagog: The Buried Gods. By T. C. Leth- bridge. (Routledge and Kegan Paul, 21s.) IN the eighteenth century the figure of a giant cut in the turf, either inside Wandlebury Camp...

DURING a brief visit to a battlefield in the winter of 1944 I saw three things which moved me rather less at the time than they did later in retrospect, and which I did not...

The Manasco Road. By Victor Canning. (Hodder and Stoughton, 12s.

6d.) First-rate novels of action and adventure are rare, and here is one that Henley and Stevenson would have clapped their hands over—fast, credible and ex- citing, set in the...

Who crisped the amorous composer by long-ago arson in cultural Lake Michigan countryside? Miss Nielsen is an elegant writer but a sloppy plotter—solution is by tape- recorder,...

Israel Zangwill. By Joseph Leftwich. (James Clarke, 21s.) THE publishers claim that this is the first biography of Zangwill. It is not a good one. It lacks method and...

The Man in Charge. By Richard Jessup. (Seeker and Warburg,

6d.) Third in a series of slightly sentimentalised semi-documentaries of the muddle of mystery that comes in hour by hour to Scotland Yard, and how the skilled yet simple-...

6d.) Rather too laboriously contrived a tale, about rather too many murders, to be on the top of Mr. Stout's big basket of books, but lazy, gormandising Nero Wolfe and the...

6d.) Immensely complicated, tough, tense tale—with twists—about cops, crooks, private eyes, and bosomy blondes in Chicago, by one of the best of all contemporary crime-writers...

The World of Suzie Wong. By Richard Mason. (Collins, 16s.) A Moment of Warmth. By Francis Irby Gwalt- ney. (Seeker and Warburg, 18s.) THESE four authors pair off neatly :...

understood, and added, `to lay the table, I promise d to do it.' He would be at home doing that, I judge later, when the thunder came, and rainspots the si of sixpenny pieces...

Geese aren't my favourite creatures. They are to 0 unpredictable and have a habit of becomir belligerent for no apparent reason at all. Last week was staying in a village where...

By IAN NIALL a Meer a lady hobbling along a country lane, or man with his arm in a sling, just lately and you w find that he or she has been bitten by a horsefly. dare not...

By NICHOLAS DAVENPORT THE collapse of the French franc should be a lesson and a warning .to the monetary 'establishment' in every country. How long can we go on pretending...

By CUSTOS THE same influences were at work in the stock markets this week as last. The gilt-edged market lacked support, industrial equities were mixed—an analysis of...

Muffin and Crumpet Baking and:Punctual Delivery Com- pany.' A prize of six guineas is offered for the title of a proposed charity or organisation appropriate to 1957 and an...

SPECTATOR COMPETITION No. 389 Report by R. Kennard Davis Competitors were asked to suppose that Laputa (See Gulliver's Travels) is holding a Geophysical 'ear, and to describe...