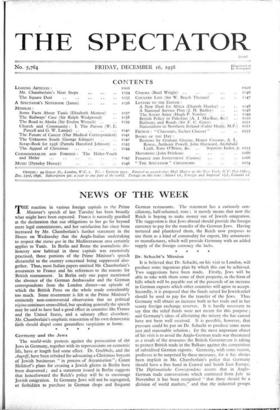 T HE reaction in various foreign capitals to the Prime Minister's speech of last Tuesday has been broadly what might have been expected. France is naturally gratified at the...

Germany and the Jews The world-wide protests against the persecution

of the Jews in Germany, together with its repercussions on economic life, have at length had some effect. Dr. Goebbels, and the Angrtff, have been rebuked for advocating a...

Dr. Schacht's Mission It is believed that Dr. Schacht, on

his visit to London, will produce some ingenious plan by which this can be achieved. Two suggestions have been made, Firstly, Jews will be able to take with them some of their...

The Palestine Problem While sporadic disturbances in Palestine continue, though

the country as a whole may be regarded as once more under effective British control, preparations for the London Con- ference are going forward not unhopefully. Mr. MacDonald's...

Reich must be accepted as inevitable after Sunday's elections, in which the Germans, organised in the German Culture Union Party, claim to have won 28 out of 29 seats. The...

Franco's Next Offensive While Germany moves towards increased religious perse-

cution, in Government Spain there is increased religious toleration. Last week the Government issued a decree recognising the right of every Spaniard to profess and practice the...

The Dominions and Their Future Some acrimonious but quite unmerited

criticism has been directed against Mr. Malcolm MacDonald for his suggestion in a speech on Tuesday that while nationalism in a British Dominion was good within limits, as an...

A New Kulturkampf There have been persistent rumours that the

culmination of the anti-semitic campaign in Germany would be the prelude to an equally bitter attack on the Catholic Church. This week the Vatican has published details of the...

by Italian demands in the Mediterranean, M. Daladier secured his expected majority in the Chamber last week, by 315 votes to 241. The majority was larger than expected, yet its...

On the face of it there could be no great

objection to Captain Ramsay's Bill making it illegal for shares in news- papers or periodicals to be registered in the names of nominees. But a great many Members, particularly...

in the House of Commons on the subject of money resolutions. It was said, and with considerable justification, that these resolutions were being drafted with so much...

This week the House has listened to two excellent speeches

from Mr. Tom Johnston ; the first on the Reorganisation of Scottish Offices, and the second on his motion for the Nationalisation of the Land. He speaks with an authority which...

The Extra Year at School Mr. A. E. Henshall, secretary

of the Education Committee of the National Union of Teachers, addressing a conference in Manchester on Saturday on the raising of the school age, claimed that the use that was...

Agricultural Policy The meeting at Lincoln last week in which

an audience of 3,000 farmers continuously booed the Minister of Agri- culture for an hour and a half gave striking expression to popular dissatisfaction with the Government's...

The Week in Parliament Our Parliamentary Correspondent writes : This

will be a lean session so far as legislation is concerned. Monday and Tuesday of this week were occupied by the Second Reading of the Cancer Bill and the Reorganisation of...

The Display of Contraceptives A Bill designed to place some

restriction on the sale of contraceptives will, it may be hoped, be given a second reading by the House of Commons this week. What the Bill does and does not aim at should be...

T HE PRIME MINISTER'S speech to the Foreign Press Association on Tuesday was marked by what a certain august organ, whose leading article on the speech culminated in Greek...

THE SQUARE DEAL IN an article on a later page,

Sir Ralph Wedgwood, Chair- ". man of the Railway Managers' Association, has stated, with admirable clarity, the railway companies' case for "a square deal." It repeats, in...

F F anything could bring home to Herr Hitler and his advisers the effect on British public opinion of his persecution of the Jews it would be the kind of speech made by the...

SOME FACTS ABOUT TUNIS

By ELIZABETH MONROE * His chief claim to attention is the presence in the territory of some 95,000 Italians—a community which, being about equal in numbers to the French...

By SIR RALPH WEDGWOOD* T HE immediate problem represented by the demand of the railways for a "square deal" is of inunense national importance. It is a question whether the...

THE ROAD TO ALASKA

By SIR EVELYN WRENCH E VER since the days of Stephenson's Rocket,' the dis- covery of the internal combustion engine and the Wright brothers' first flight in a heavier-than-air...

CHURCH AND COMMUNITY: I. THE PARSON

By W. E. PURCELL and G. W. LAMPE I T is one of our numerous English eccentricities to believe that the Anglican parson represents an unchanging type. It gives pleasure, it...

THE FUTURE OF CANCER

By OUR MEDICAL CORRESPONDENT Cancer remains, however, one of the principal scourges of the human race, not only in civilised countries but amongst many native peoples ; and it...

By GEORGE EDINGER L IKE every other traveller who enters the South by road from Washington I found the first object on my way was the National Cemetery established in the Lee...

By PAMELA HANSFORD JOHNSON T HE worse things grew, the more mystic became my aunt. She was old, she had been troubled in her youth and middle-age, and she resented with a...

THE APPEAL OF CHRISTMAS

There is another aspect of the suffering abroad in the world today. To visit in turn the various voluntary societies in London which are so heroically coping with the influx of...

Commonwealth and Foreign IN the period from 1919 to 1933 there were two kinds of inducement to join the German Youth Movement ; on the one hand, spontaneous and personal, on the...

THERE is a legend that once, at a garden party, Victor Hugo was approached, in separate secrecy, by two schoolgirls ; and each begged for a message in her autograph book. The...

STAGE AND SCREEN Festiva Maxima Plena THE peony must lend us its resounding title ; nothing less is adequate for the conglomeration of events that are to take place in the five...

A Wild-flower List Open weather may this December be taken to mean weather in which flowers open. We are used to lists made out by gardeners. Here is one made by an eminent...

THE TRUTH IN GERMANY [To the Editor of THE SPECTATOR]

SIR,—I have recently received the following unsigned letter from a German pastor whom I met some years ago. I am prepared to vouch for its authenticity, but I cannot disclose...

A NATIONAL SERVICE PLAN [To the Editor of THE SPECTATOR]

Snt,—In your issue for December 2nd Mr. Lennard criticised the admirable proposal by Sir Cyril Norwood for a training in national service that is not directed only to military...

[Correspondents are requested to keep their letters as brief as is reasonably possible. Signed letters are given a preference over those bearing a pseudonym, and the latter must...

[To the Editor of THE SPECTATOR] SIR, — My purpose is not, as Mr. Edwyn Bevan implies, to uphold Soviet prestige, but to get as near as may be to the truth. Mr. Pirow, M. de...

[To the Editor of THE SPECTATOR] SIR,—May I be allowed to comment on the article from a Scandinavian correspondent published in last week's issue of The Spectator ? Everybody...

SOBER BRITAIN [To the Editor of THE SPECTATOR] SIR,—Since 1930

more than i,000,000 unemployed have been absorbed into industry, and more people are in employ- ment and the wages bill is many millions higher than ever before in the history...

SIR,—We the undersigned non-official British residents of long standing in

Palestine wish to emphasise certain points, an understanding of which we feel is essential to a just solution of the present problems. 1. The failure of Government to take...

[To the Editor of THE SPECTATOR] SIR,—Mr. E. N. B. Bentley disagrees with my contention that we should conCentrate on the production of bombers on the ground that we have at...

[To the Editor of THE SPECTATOR] SIR,—May I offer a few remarks (disjointed for the sake of brevity) upon Mr. Arnold Plant's article ? (r) Is there evidence that a named...

[To the Editor of THE SPECTATOR] SIR,—I should be grateful if you would allow me through your columns to draw to the attention of your readers the special contribution which...

[To the Editor of THE SPECTATOR] Sta,—I have read the letter of Mr. George C. J. Young,. M.P., in your issue of November 25th. It is an excellent example of the abilly of a...

[To the Editor of THE SPECTATOR] SIR,—I can't argue with Mr. Ramsay Muir about might-have- beens. Let it be agreed that he knows better than Mr. Lloyd George what the...

BOOKS OF THE DAY By GRAHAM GREENE OXFORD has deserved it : that is our first thought on closing this sumptuous record of a crime. The lovely photographs of Mr. Moholy-Nagy...

Brest-Litovsk : The Forgotten Peace. March 1918. By John W. Wheeler-Bennett. (Macmillan. 21s.) . THE book covers the whole course of events around the treaty— the complete...

Hunger and Work. By J. Kuczinski. (Lawrence and Wishart 3s. 6c1.) " - I HOPE every Trade Union will get this book," writes Mr. Coppock, general secretary of the National...

Cuthbert Tunstal. By Charles Sturge. (Longmam. 2 Is.) CUTHBERT TUNSTALL, Bishop successively of London and Durham, was by common agreement one of the most attractive and...

Life Has Been Good: Memoirs of the Marques de Villavieja. With a Foreword by the Duke of Berwick and Alba. (C.hatto . and Windus. r8s.) Memoirs of a Soviet Diplomat. By...

Chateaubriand. By Andre Maurois. Translated by Vera Fraser. (Cape. I2S. 6d.) Tins is the first biography by M. Andre Maurois that I have had occasion to read in an English...

JOURNEYS BETWEEN WARS Journeys Between Wars. By John dos Passos.

The two authors of this book (Cape, Jos. 6d.) have asked what are the essential needs to well-being, to what extent are these needs met in society today, and if they are not...

The elements reman fr . endly, the weather persistently clement. It is all wrong, but the Christmas cards this year restore the seasonal background to a seemly hostility. Never...

FRANKLIN ROOSEVELT: HIS LIFE AND ACHIEVEMENT By Basil Maine

The mterest in Mr. Roosevelt's career, to which this book (John Murray, 'as. 6d.) testifies, no doubt comes in part from the great importance of the office he holds. Not even a...

The late Mr. Price, who died while the book was

in the press, has added to the ever-increasing number of business histories a modest record (Dursley : F. Bailey, is.) of the firm of Blackstone and Co. Ltd. of Stamford, which...

Winter. - the Enemy By all accounts,, even by the prophecies_ of learned monks, proper winter will be upon us when these notes are. printed. For the next four months at least we...

FINANCE AND INVESTMENT By CUSTOS MARKETS are still in the

clammy grip of European politics but are trying hard to get free and look the other way. Not that there is any very alluring prospect in any direction, but the purely trade...

THE contribution which the British steel industry announced last week towards industrial recovery proved more substantial than was expected. Prices are to be reduced by between...

SOLUTION TO CROSSWORD No. 324 SOLUTION NEXT WEEK The winner

BY ZENO IA prize of a Book Token for one guinea will be given to the sender of the first correct solution of this week's crossword puzzle to be opened. Envelopes should be...