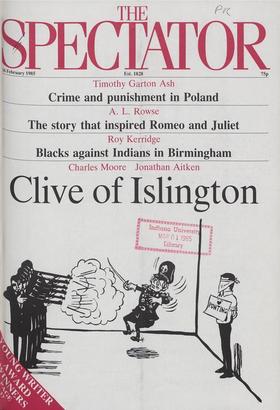 M r Clive Ponting, a civil servant who leaked documents about the sinking of the Belgrano to Tam Dalyell MP, was acquitted of breaking the Official Secrets Act. Mr Ponting...

The ponting of Margaret P onting' deserves to become a word in our language. Like many of our best words, it will be somewhat ambiguous and used in different ways by different...

Peter Quennell writes: The sudden announcement, when first I heard it on the telephone, that my old friend Patrick Leigh Fermor was about to celebrate his 70th birthday seemed...

S ir Peter Hall is a showman with a high estimation of his own qualities, so he probably believes that his outburst against Lord Gowrie, the arts minister, at the Standard Drama...

On 12 March, three P.E. instructors in Pentonville Prison will

Fat cats Auberon Waugh A t Champney's Health Farm, a former Rothschild mansion in Tring, Hert- fordshire, cut off by a blizzard from the rest of the world, one might well...

T he other morning I went round to my local newsagents to buy a carton of eggs. It had looked from the inside rather nice outside — sunlight on the snow, children in woolly hats...

Timothy Garton Ash T am doing right, I have committed no crime, so what have I to fear?' he asked me. A, year later he was dead: horribly beaten about the head by a police...

Christopher Hitchens Seoul, South Korea outh Korean law contains no provision b...3 for the penalty known as house arrest, which may explain why those who are subjected to it...

Jonathan Aitken I n the 74-year history of the Official Secret Acts 1911, there have been sever- al close shaves with it among high-minded personages, all of whom might have...

A Bill of Rights

Lord Scarman's foot Shirley Robin Letwin ("Irice upon a time it was proudly recog- nised that the English constitution is, as Dicey said, 'a sort of maze in which the wanderer...

A bar with no hats

Roy Kerridge Handsworth, Birmingham M ost people have an instinctive liking for their own kind' is a remark that is often heard nowadays. Well, all I can say is that 'most...

There is, we fear, little ground for hoping that General Gordon is alive. The news of his death is not official; it is conceivable, although improbable, that he is defending the...

Richard West Rye, Sussex T he proposal by a bureaucrat in the Home Office to make it illegal to drive after more than one drink is all the more arrogant since it now seems to...

is looking for an enthusiastic sales executive to sell advertising

space. Previous experience is essential. This job offers an exciting opportunity to participate in The Spectator's growth. Salary commensurate with experience. Please apply...

Noeleen Gorman D oubtless the quality of child care in ,Great Britain is high. Everyone for of the excellent facilities available tor children in need of care and of the co...

Looms of youth Paul Johnson T he last time.I wrote a review of student publications for the Spectator, I noted the growing apoliticism of our universities, the lack of...

comes to li g ht in the unlikely armoury of Gomme Holdin g s, Which makes G-Plan chairs. Gomme has had a rou g h time, but the pension fund has done better than the company. Now...

note last week (`No, Sir John') about his bank and his successor-desi g nat e , Sir John Nott, the former Secretary of State for Defence. It was (I had said) unfortunate that...

licence to print money. He came by it when he took command of the British Printin g & Communications Corporation, our lar g est printin g g roup. BPCC owns Waterlow, the...

The twenty-two steps he politics of privatisation need careful 1

Shrinking money P oor sterlin g , poor all of us! The mar- kets seem to have lost their fear of the central banks' intervention. That psycholo- e?cal war will need to be fou g...

A Chancellor's nerve Jock Bruce-Gardyne C hancellor Lawson, it seems to be generally agreed, has had an imperial lesson, although there is little inclination to predict that...

Sir: I read with pain the contemptuous comment by your contributor Geoffrey Wheatcroft (Books, 9 February) on the Order of Priests, of which I have been a member for over 25...

Sir: S. R. Atkins (Letters, 9 February) may care to consider whether his purpose would not be as well, or better, served by treating everyone equally for tax purposes, men and...

Sir: How unkind of you, to subject Emmett Tyrrell to the ordeal of doing an article for the Spectator (`The Liberal Crack-Up', 19 January). Now and then I've noticed a dash of...

Sir: The statement that England gave the world racing — horse racing — (Notes, 26 January) is not strictly correct. The Guin- ness Book of Records (1958 edition) states that...

Two camps Sir: It would seem that Beryl Bainbridge (Diary, 2 February) left behind her corn- 'nonsense when she decided to visit Greenham Common, a fault common to Many who...

Sir: As you know, Asians have settled in Britain from at least the 18th century. However, with one or two exceptions, little is known about these early settlers, and little...

Sir: Just like to say that a dear friend of mine in Saudi Arabia gave me a subscrip- tion to your magazine as a Christmas present. And that I'm deeply grateful to him for this...

`Population' or people? Colin Welch T he Ethiopian famine, with all its atten- dant and spreading side-horrors, pre- sents most of us with hideous dilemmas. To the extent that...

The bulldozer of Iran

William Shawcross The Reign of the Ayatollahs: Iran and the Islamic Revolution Shaul Bakhash (I. B. Tauris £13.95) Iran under the Ayatollahs Dilip Hiro (RKP £20) 'These two...

Miranda Seymour Heaven and Earth Frederic Raphael (Cape £8.95) O pen University lecturers must be be- ginning to tire of being victimised by novelists who want to indicate an...

Francis King As Rose Macaulay rattled around Lon- don in her little motor — peering at traffic-lights, across which she would then bump just as they turned amber, insou-...

The best film ever made

Richard Ingrams Jacques Tati: Frame by Frame James Harding (Secker £12.95) 'W hat is the weather like in Paris? Is it a fine and sunny day?' Those were the unlikely words of...

Tom Hartman Pillars of Monarchy: Royal Guards 1400-1984 Philip Mansel (Quartet £18.50) T his is 'not a work of military history' says the author in his introduction, by Which...

Next Week A. N. Wilson on English catholics. Max Hastings

on Falklands memoirs. Eric Christiansen on The Thirty Years War.

Noel Malcolm The Music Makers: The English Musical Renaissance from Elgar to Britten Michael Trend (Weidenfeld & Nicolson £15) T am not really complaining when I say ithat the...

Shakespeare and the Danvers-Long Feud

A new source for Romeo and Juliet? A. L. Rowse D r Johnson was 'always inclined to believe that Shakespeare has more allusions to particular facts and persons than his readers...

As if it stood in some vast English park The chestnut at my modest entrance gate Is detailed and embrowned according to The lessons learnt and taught by landscapists. `Don't...

Neatly ringed Rodney Milnes T he most depressing thing I have ever seen, apart perhaps from Terry Bands's Parsifal, was a birch forest in Ar dnamurchan that had apparently...

Treatment Christopher Edwards The Lonely Road (Old Vic) A A rthur Schnitzler, who was born in ..Vienna in 1862, has been well and truly rescued from his reputation as a...

When duty calls Peter Ackroyd Secret Honor (`15', Everyman, Hampstead) the beginning of this account ,c ' d d Nixon's last days, the message COl not have been clearer: 'The...

Chit-chat Alexander Chancellor ' come a confession to make. I have rather 'come round to Michael Aspel. In the past I have tended to think of him as one of the most awful...

Sightseeing Jeffrey Bernard I n just a few weeks' time I am going to conduct an American girl on a guided tour of London and some of the parts of England that I hold dear or...

Labour of love Alice Thomas Ellis P eople have started getting married again. We all did it at one time but then it seemed to go out of fashion. Now my. acquaintance is...

No. 1359: Q for ? Set by Jaspistos: Some people have thought that each letter of the alphabet by its sound and shape inherently suggests certain qual- ities (a activity or...

Seasonal P. J. Kavanagh S aint Valentine's Day is traditionally the day when birds pair off, and year after Y e ar, on cue, birds begin to flutter round e ach other, and...

Jaspistos reports: Competitors were asked for a teenage Valentine poem in the appropriate jargon. This was an educational comp. for me; since my jargon has not kept pace with...

Pyrrhic? Andrew Whiteley T he world championship match clearly established that Karpov was the best player in the world in 1984. But the issue in 1985 is far less clear. Even...

Spectator Wine Club Auberon Waugh P unters may grow bored with the way I push a different C6tes du Rhone at them every month, but I persist in believ- ing that they offer the...