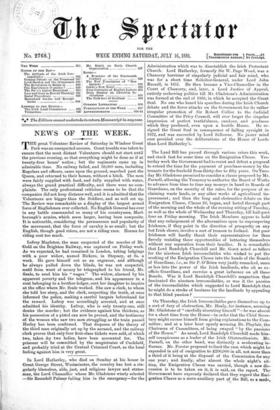 In Lord Hatherley, who died on Sunday at his house

On Thursday, the Irish Irreconcilables gave themselves up to a

sort of fury of obstruction, Mr. Healy, for instance, accusing Mr. Gladstone of "carefully absenting himself "—he was absent for a short time from the House—in order that the...

Lefroy Mapleton, the man suspected of the murder of Mr.

Gold on the Brighton Railway, was captured on Friday week. As we expected, he had remained in London, taking lodgings with a poor widow, named Bickers, in Stepney, at 6s. a...

T HE great Volunteer Review of Saturday in Windsor Great Park was an unexpected success. Great trouble was taken to ensure that the most distant Volunteers should not start...

The Land Bill has passed through various crises this week,

and stuck fast for some time on the Emigration Clause. Yes- terday week the Government had to resist and defeat a proposal to extend the time for the payment of purchase-money...

Immediately after the vote of the Great Assembly, the.Prince issued

a proclamation, in which he warmly thanked the people for their confidence, declared that he would only use his excep- tional powers to remove obstacles to the organisation of...

The Bulgarian revolution has been accomplished. The Great Assembly called

by the Prince, in the terms of the funda- mental law, to revise the Constitution, met at Sistova on July 13th, amidst enthusiastic demonstrations of popular ap- proval. It was...

The Opposition are using the Irish labourers to resist the

Irish farmers ; but the case of the former is, nevertheless, quite genuine. A deputation, including men like Mr. Litton, Mr. Blennerhassett, and Sir R. Wallace, waited on Mr....

The insurrection against the French in North Africa in- creases.

Bou Amema has sustained a repulse in Oran, or is said to have sustained one, but the bombardment of Sfax has failed, and 10,000 Arabs there collected forbid the landing-of the...

The Times' correspondent in Paris has opened fire on General

Farre, the Minister of War, whom he charges with hopeless incapacity. He accuses him of neglecting the insurrections, of picking out regiments from all parts of France for...

The periodical fury into which the extreme Irish Party think

it essential to lash themselves against the Irish Secretary broke out this week in its most violent form on Monday, on occasion of one of the irregular discussions concerning...

Mr. Long offered a "personal explanation" on Monday of his

recent charge against Mr. Parnell, that the latter had raised the rents of his Wicklow estates 70 per cent. above Griffith's valuation. In the first place, the estates to which...

The reports from Washington as to President Garfield's con- dition

become more reassuring, and they are confirmed by pri- vate telegrams. The surgeons now say that although they will not guarantee- a recovery, and expect a long period of ill-...

Lord Sanden made an enthusiastic speech to ten thousand Orangemen,

whom he addressed at Ormskirk, on Tuesday, the general drift of which was that they should turn their organi- sation into one for the defence of "religion, law, and the purity...

The last year was not altogether a bad one for

An unknown benefactor has enabled. Owens College, Man- chester, to

try a very interesting experiment in the endowment of research. Five hundred a year for an experimental term of three years has been placed at the disposal of the Council of...

The Times' correspondent at Geneva says a really magnifi- cent

swindle, quite the largest in idea of our time, has been detected there. Several persons—one a gentleman, and another an eminent jeweller—have been arrested on a charge of...

It is proposed that a painting of the' Resurrection, by

Mr. Mime Jones, shall be put up in the centre of the reredos in the church in Vere Street, as a memorial to the late Frederick Denison Maurice, for ten years the incumbent of...

THE COMING DEBATE ON THE TRANSVAAL.

J UDGING by the Conservative meeting of Monday, we have very little hope of any good result from the debate on the Transvaal which is to commence next week. There is a case, and...

LORD SANDON AND THE ORANGEMEN. T ORD SANDON'S address to the

Orangemen at Orms j - kirk, on Tuesday, is in some respects highly creditable to that worthy nobleman's heart, but it seems to show that a very strange process of fermentation...

THE REVOLUTION IN BULGARIA.

O NE thing, at least, is made clear by the accounts from Bulgaria, and that is that the Prince was right in believing that his people were as impatient of the Constitu- tion and...

T HE lately published Encyclical sums up the whole policy of Leo XIII. as regards the temporal authorities with whom he is brought into relation. There is a sense, no doubt, in...

I T is perfectly natural and perfectly right that England should admire itself a little for the Volunteer fete of Saturday last. A truth does not become a falsehood because it...

LOSS AND GAIN IN RECENT THEOLOGY.

D R. MARTINEAU, whose genius has done more to mould the religious philosophy of the present day, especially in its conflict with empiricism and materialism, than that of any...

" S OCIETY " will be grateful to Sir Bernard Burke for his "Book of Precedence," just issued. It is only a bound pamphlet of eighty-seven pages, clearly printed,* and con- tains...

C4 W HO reads, and to his reading brings not a spirit and judgment equal or superior, uncertain and unsettled still remains, crude or intoxicate." It is a far cry from "Para-...

THE IRISH LAND COMMISSION. [To THE EDITOR 07 THE " SPECTATOR:1 Sia,—Liberal and intelligent Englishmen will admit that the main causes of the disastrous condition of Ireland...

[TO THE EDITOR OF THE 'SPECTATOR.") SIR,—Although I fear our cause has but a slender chance of ob- taining a hearing in Parliament this Session, yet the announce- ment of a Bill...

A ROMANCE OF THE NINETEENTH CENTURY.* It is difficult to imagine that this book can have any effect that is not mischievous ; and to introduce it into ordinary drawing-rooms...

MR. HATCH ON EARLY CHURCH ORGANISATION. [to ms EDITOR OF

TIM"SPECTATOR."] SIR,—In your strong eulogy of Mr. Hatch's representations of early Christian organisation, I read as follows :— " After the admirable and scholarly excursus of...

THE NEW TRANSLATION OF DON QUIXOTE.* HUMAN nature must have

altered very much since the time of Cer- vantes, if Mr. Duffield gets half the credit he deserves for this labour of love ; but the faults of the book are just such as make the...

A Village Commune, by Ouida, is a book of the dreariest and most pessimistic tendencies that ever was shaped in the form of a novel. Here is a brief outline of the contents...

"Din you ever see Ellis's Specimens of the Early English Poets It is a very useful collection, though not, to my judgment,- made with due knowledge or taste,—but still a good...

Is a very characteristic passage in this, the latest, and cer- tainly not the least interesting, picturesque, and earnest of the many volumes which the Dean of Westminster has...

THE FOLK-LORE OF SCOTLAND.*

MODE RN tendencies are far from favourable to folk-lore.. Railways, telegraphs, and educational influences of many kinds are doing not a little to chase away the easy credulity...

Oliphant, Edinburgh ; Hamilton and Co., London.)—The leading thought of this volume, made up of lectures delivered by the author at Chicago, is the extreme value of the...

The Nineteenth Century. By Robert Mackenzie. (Nelson and Sons.)—This, on the whole, is a very creditable piece of work. h is a summary, in 460 pages, of the history of the...

Chili : Sketches of Chili and the Chilians during the

War. By R. Nelson Boyd. (W. H. Allen.)—There is abundance of practical in- formation in this volume, though it does not tell us anything but what we had already heard about the...

Socrates' Ecclesiastical History. The Greek Text, with Intrc- duction. By

Songs of a Worker. By Arthur O'Shaughnessy. (Chatto and Windus.)—The

poems included in this volume were written by Mr. O'Shaughnessy during the two years which preceded his early death, and the melancholy by which many of them are pervaded is, we...

Amid the Corn. The Christmas Party. The Whitsuntide Visit. By

the Author of "The Evening and the Morning." (James Speirs.)— These are two elegant-looking little volumes, appearing to be intended to amuse an idle half-hour ; but only open...

The Life of James Mursell Philipp°. By Edward B. Underhill,

LL.D. (Yates and Alexander.)—Mr. Philippe was a missionary, connected with the Baptist Missionary Society, in the island of Jamaica. His work there extended over more than fifty...

Fashions of the Day in Medicine and Science. By H.

Strickland. (Ccnstable, Leng, and Co., Kingston-upon-Hull.)—This is a lively and amusing book, a clever book, in fact, though we must say that there is a good deal of...

What is the Truth as to Everlasting Punishment ? By

the Rev. F. Nutcombe Oxenham, MA. (Rivingtons.)—This is an answer to Dr. Pusey's recently published treatise, "What is of Faith as to Ever- lasting Punishment ?" and, as an...

and Darton.)—A. book, this, which besides containing much information, ecclesiastical and historical, is also of considerable prac- tical utility. The beat authorities have been...

The Irish Problem, and How to Solve It. (Ward and

Lock.)—The author of this volume briefly reviews the early history of the connec- tion of Ireland with England, and tells it in greater detail from the date of the Union. The...

Castism and Sectism. By J. Kerr, M.A. (Edmonston and Co.,

Edinburgh.)—This is a book with which a reader may fairly enough svhile away an occasional half-hour. There are some amusing re- marks and anecdotes, but on the whole, the tone...

Quaerenda ; or, Two Historical Secrets. (Simpkin and Marshall.)— These

two secrets are the "Romance of Solomon, hidden in Scripture for 2,800 years," and the Lamp of Allah, a chapter of Asiatic history, with which, under the title of Aladdin and...

York.) —Dr. McLean, "projector, inventor, and patentee," and Myron Coloney, "mechanical inventor and patentee," are humourists, though the humour which they indulge in is not...