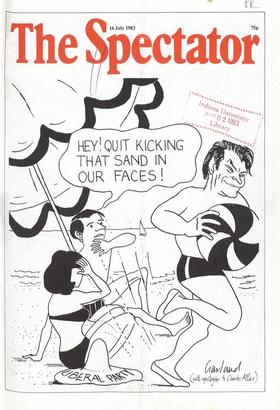 W hen Mr Norman Tebbit expounded his new proposals for trade union reform in the House of Commons on Tuesday, the Labour opposition could muster no impressive arguments against...

Thoughts on Ettrick Bridge Charles Moore B eing a journalist, I do not know what it feels like to have worked as hard as Mr David Steel. Perhaps this lack of shared ex-...

110o legs at all, no legs at all.' I heard the .16 words wafting up from the pavement behind me as 1 supervised the unloading of my luggage from the car which had delivered me...

Tremors of Tonypandy Auberon Waugh O bsessed as we all must be by Mrs Thatcher's restoration of hereditary peerages to her Honours List — the one solid and constructive...

Nicholas von Hoffman T he puzzling aspect to the case of the stolen Jimmy Carter debate papers is 'Why now?' At the time the Carter-Reagan debate took place, then-congressman...

Xan Smiley B y the standards of East Europe and the Soviet Union, Yugoslavia remains an astounding success bOth in terms of material advance and social liberty. The Yugoslays...

No holiday for France

Sam White Paris T here was a time when French governments introduced unpopular measures — invariably fiscal ones — in the month of August when traditionally the largest number...

A Mahatma who shot Gandhi

Ian Jack Delhi A lot of people in India have seen Sir Richard Attenborough's film on Gan- dhi, and a lot of people want to talk about it. Deputy Inspector-General A. N....

Richard West Rottingdean plaque says that Rottingdean was 'the best kept large village in East Sussex' in 1974. It is back in the news again because the villagers have...

Hackers and cutters Jock Bruce-Gardyne 'But of all plagues, good Heaven, thy wrath can send, Save, 0 save me from the candid friend.' anning's cri de coeur must have been...

is looking for two new members of staff 1. A young and enthusiastic person to help sell advertising and Assist with the promotion of the magazine. An ideal job for someone with...

The accounts from Egypt are most distressing. The deaths from cholera in Damietta are declining, the daily average having sunk from 120 to 35; but at Man- sourah, a town...

Silly season monsters Paul Johnson T he anticlimax which inevitably follows a one-horse election has brought the sil- ly season on early this summer. The Government's...

A case for hanging

Colin Welch V ive out of six Ulster Secretaries will vote (or, by the time you read this, will have voted) against the restoration of capital punishment. Not surprising that...

Sir: Once again Mr Frank Allaun prosecutes the cause of his Right of Reply in the Media Bill (Letters, 18 June). Once again, his arguments are spurious. Simply because 'Canada,...

Sir: Timothy Garton Ash (2 July) was one of the few observers in Poland who pointed out clearly the paradox of the Church's position there. One could go even further: the...

Sir: I had intended, apart from making my family's personal remonstrance to the Mayor of Camden, to remain silent on the controversy raging over Selous Street. However, when...

Sir: Ghana is hungry: an egg costs over £2, a tin of milk powder over £10. Is it true that the EEC intends to throw milk and butter into the sea? We are also mentally starved;...

A prayer for moderation Sir: Although one may assume that no human aberration is capable of shocking or surprising Almighty God, it is still never- theless illegal in this...

Sir: A few weeks ago I noticed in my church porch a biographical note concerning the new Bishop of Guildford who lists among his recreational interests the act of sneezing. Last...

As published in the Spectator of 11 June, 1983, Be! Mooney's review of the book `Mr George Eliot' by David Williams contained an apparently disparaging reference to Mr Clive...

Kay Dick A Portrait of Charles Lamb David Cecil (Cape £7.95) C oleridge liked him, though he quarrel- led with him, Wordsworth liked him, if Wordsworth could be said to like...

Artemis Cooper Baron James: The Rise of the French Rothschilds Anka Muhlstein (Collins £10.95) T he rise of the Rothschilds is a most dramatic rags-to-riches story, and it is...

Nigel Nicolson A ll the explorers of the Niles (it must here be written plural) had motives Other than adventure. Bruce was a linguist and scientist, Livingstone a missionary,...

A. L. Rowse nr Johnson, best of Shakespeare critics, was convinced that we should find much more that is revealingly topical in the plays if only we knew more about the time...

Constant John McEwen Harold Cohen (Tate Gallery till 24 July) M alcolm Morley was born in Highgate in 1931, trained as an art student at Camberwell, and the Royal College...

Belgian tragedy Peter Ackroyd LIEtoile du Nord (PG', Odeon Kensington) Q ince most of this film is set in a Belgian boarding house, it may not be for those with fixed...

INTRODUCTORY OFFER open to non-subscribers Take out a subscription to The Spectator and we will send you a free, signed copy of BESIDE THE SEASIDE OTHER TALES by Roy...

Heart-throb Taki ancient Greeks — despite their infinite wisdom — did not invent, for obvious reasons. For those of you who failed your Greek, it means undressin g a woman...

Settled Jeffrey Bernard R ichard Burton overtook me last week but I can assure you that this is only a temporary setback. I have eight years in hand, am cruising into the...

Sun P.J. Kavanagh T have had a letter from a reader kind 1 enough to express approval of my description in this column of our dank May and hoping that I will go on to describe...

Jaspistos reports: Competitors were asked for a poem consisting entirely of two- syllable (to the ear) words. Not so easy as it appeared at first glance, eh? Lucky for you...

No. 1278: Carry on Set by Jaspistos: 'Clarkson! that was an obstinate ...' If Wordsworth could begin a sonnet in that odd way, so can you — and finish it. Any theme or mood...

The circuitous titles begin in radials 1, 15 and 25; and the thematic phrase (from The Tempest, Act V, Sc. i) begins in radials 31/32, with adjectives transposed. Winner: Geoff...

A prize of len pounds will be awarded for the first correct solution opened on 1 August. Entries to: Crossword 616, The Spectator, 56 Doughty Street, London WC1N 2LL. Each...

Fischer diaries? Raymond Keene A n alarming little booklet has just come into my possession, 'I Was Tortured in the Pasadena Jail/louse! by Bobby Fischer, The World Chess...

F our weeks after the general election, the Chancellor of the Exchequer an- nounced public spending cuts of £500 million — including reductions of £230 million in defence and...