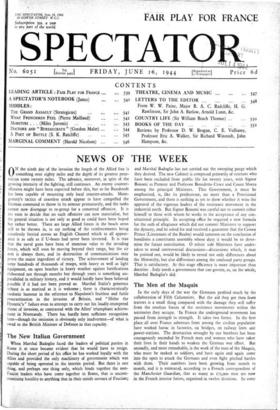 0 N the ninth day of the invasion the length of the Allied line is something over eighty miles and the depth of its greatest pene- tration some twenty miles. The advance,...

The Men of the Maquis

In the early days of the war the Germans profited much by the collaboration of Fifth Columnists. But the aid they got then from traitors is a small thing compared with the...

When Marshal Badoglio faced the leaders of political parties in Rome it at once became evident that he would have to resign. During the short period of his office he has worked...

The House and Mr. Hudson

It is not surprising that Mr. R. S. Hudson found the sense of the House of Commons against him when he asked for certain excessive powers for officials under one clause of the...

Letters in The Times this week on a National Health Service, from Sir Alfred Webb-Johnson on Tuesday and Lord Dawson of Penn on Wednesday, contain some reasonable criticism to...

A deserved tribute to the Ministry of Food was paid by members of the House of Commons in the Committee of Supply debate last week. Colonel Llewellin was able to forecast a...

One grave exception to the general improvement in health and mortality during the last quarter of a century has throughout that period baffled the medical profession. It is in...

France on Monday was to British troops, there was an aspect of the event which must have inspired singularly unhappy reflections in the French. The Prime Minister was...

O NE effect of the invasion is to lift the veil which has hidden from us the ordinary life of occupied France, and very interesting the first glimpse of the picture ought to be....

By STRATEGICUS T HE operations in Normandy have now secured a broad and deep lodgement, and the initiative, seized on June 6th, is being more vigorously exercised than ever....

By PIERRE MAILLAUD I T has been said and repeated time and again in the course of the present conflict that the speedy winning of the war must take precedence over all other...

By MILES JUVENIS A RE we to be another lost or submerged generation? Are we doomed either to death or eternal ineffectiveness? Arc the survivors from our ranks destined to see...

A POET OF BATTLE

By S. K. RATCLIFFE T HOMAS CAMPBELL died just one hundred years ago—on June 15th, 1844. Near the close of his life he asserted that his share in founding the University of...

By HAROLD NICOLSON T HE photographs and drawings now being exhibited at the National Gallery by the National Buildings Record remind us of the immense architectural riches...

IT is a pleasure to see a play that has real characters and is well written. Miss Kate O'Brien and her collaborator, Mr. John Perry, have also been very deft in adapting her...

Sir Henry Wood's Jubilee SUPERLATIVES have nowadays lost so much of their force that they would convey only a feeble impression of the ovation with which the audience that...

Sus,—The medical profession should be grateful to The Spectator for

opening its columns to discussion of the Government's scheme for a national comprehensive medical service, while feeling surprised that on the whole the Press has devoted so...

LETTERS TO THE EDITOR Sta,—Professor Hill, in your issue of June 9th, draws timely attention to the great need of developing India's economic resources. " Only a purely Indian...

Sut,—It is earnestly to be hoped that Professor Hill's powerful

article will be studied with careful attention both here and in India. If he can succeed in getting the Indian problem raised above the political arena it will be a great...

Sta,—I hesitate to ask for the use of your space for controversial purposes but I feel that Mr. Rendall's letter in your issue of June 9th demands a reply. It ranges far beyond...

SIR,—Many will he grateful for the article on " India's

Real Problem " by Professor A. V. Hill. Is he not mistaken, however, in thinking that " calamity " may come? India is certainly experiencing the painful consequences which...

Sett,—I read with great interest your editorial article on " Education in Africa " in your issue of January 14th. As a planter of some experience in Bast Africa and being...

Sra,—May I reply briefly to Mr Alexander? As regards his first point, I can only quote page 19 of his book, where he says " It was a bitter thing for India's leaders to feel...

is a good piece of surface observation, but she makes no attempt to analyse, and shows no sign of understanding, the reason for the conflicts that she describes. Her article...

THE PLEBS IN CONFLICT

Stn,—As a Pleb, I wish to confirm Miss Reaveley's experiences in a factory, with the reservation that such emotions only arose after the freedom and mental stimulation of...

t; Q SIR,—The Syndics of the Cambridge University Press, who

have announced the forthcoming publication of Sir Arthur Quiller-Couch's unfinished Memories and Opinions, have commissioned me to write a book dealing mainly with his later...

SIR,—In this week's " Notebook " Janus refers to The Echo, that London halfpenny evening newspaper which appeared in t868 and dis- appeared in 1905 ; and he also refers to the...

SIR,—I wish to thank you for the references which you made to my paper at the Farmers' Club last week on Agriculture and Industry. One mistake has, however, crept in which I...

SIR.—Though you have closed the correspondence, you will allow me, I know, to reply to the serious charge of misquoting and misdating Mr. Low's cartoons. My authority is Lord...

SIR,—Round pegs in square holes are doubtless inevitable in these days. But that is no reason against readjusting pegs and holes wherever possible. A number of young women with...

WHEN war broke out most of the natural history societies met to decide whether they would suspend their activities, at least in some regard,. Nearly all decided to defy war ;...

The New Man IT was, I think, Dr. P. G. Wodehouse who said of one of his char- acters that he looked more like an American than anybody, except another American, could possibly...

The Face Without a Frown. By Iris Leveson Gower. (Muller. 15s.) THE eighteenth century was an age of involved elegance and of enormous urbanities. Manners were not everything,...

In Defence of Munich

Empire in Africa. By Alexander Campbell. (Victor Gollancz. 6s.) THIS is a grim book on a grim subject. Africa, the second largest of the continents, is the poorest of them all,...

Observation has drawn up a report on what men and women—in war work, in non-war work, in Civil Defence, in the Services—feel about the post-war world and their place in it. But...

IA Book Token for one guinea will be awarded to the sender of the first correct ,action of this week's crossword to be. opened after noon on Tuesday week, lune 27th. Envelopes...

SOLUTION TO CROSSWORD No. 273 SOLUTION ON JUNE

By CUSTOS THOSE observers of the stock markets who expected, if not a moderate setback, at least a pause when the invasion of the Continent began have been falsified by events....

Stand by to Surface. By Richard Baxter. (Cassell. ros. 61)

THERE is no object in going on and on writing about " superb skill " and " unsurpassed gallantry," in repeating such phrases until all meaning is drained out of them. There is...

Triumph Over Tunisia. By T. H. Wisdom. (Allen and Unwin. 8s. 6d.) NEITHER of these books attempts to cover the Tunisian campaign as a whole. Mr. Divine is a war correspondent...