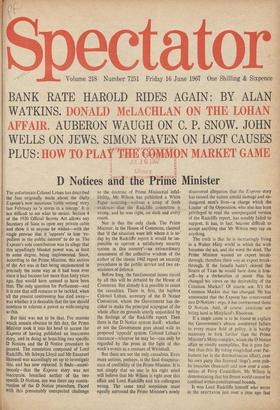 D Notices and the Prime Minister

The unfortunate Colonel Lohan has described the fuss originally made about the Daily Express's now notorious 'cable vetting' story last February as 'a storm in a teacup.' It is...

So Mr Ian Smith's new round of signals from Rhodesia have been officially picked up. This time it is Lord Alport, a former high commissioner, who is being sent out to ex- plore...

At the weekend the war ended, after only six days; and Israel savoured a stunning triumph. But the troubles of the Middle East were far from at an end.. The squabbles about the...

POLITICAL COMMENTARY ALAN WATKINS Towards the end of my brief evidence to the Radcliffe Committee, an apparently puzzled and clearly pained Mr Emanuel Shinwell taxed me with...

CHRISTOPIIER HOLLIS The Postmaster-General is proposing to erect a steel lattice tower eighty feet in height on Bredon Hill to improve telecommunications be- tween Birmingham...

MIDDLE EAST-1 PHILIP GOODHART, MP 'I really believe that the Israelis have actually made a profit out of this war,' a colleague of mine remarked ten and a half years ago after...

THE PRESS DONALD McLACHLAN As was to be expected, the Prime Minister's dispute with the Daily Express has resulted in serious damage to the D Notice process and to the man who...

On Monday Mr Wilson trai els to Paris to meet General de Gaulle and discuss the fate of Britain's application to join the Common Market. At this critical hour, as failure and...

MIDDLE EAST-2 DEV MURARKA Moscow—in the wake of the Israel blitzkreig, which has left the Arabs defeated and bitter and the Russians despondent, the first necessity is for...

MIDDLE EAST-3 MURRAY KEMPTON 'I have been saved by despair and self-esteem, by the fact that I would rather see my kingdom in ruins than yield. My obstinacy has plagued the...

MIDDLE EAST-4 PHILIP DE ZULUETA The shares most affected by the Middle East crisis have been those of the United Nations. The Secretary-General's stock has slumped even more...

TELEVISION STUART HOOD Must the doors of Independent Television re- main for ever closed to new applicants, however good they are? The question was put in these terms by Lord...

THE LAW R. A. CLINE Minor motoring offences encumber our crimi- nal courts like greenfly. The present system which equates such offences with criminal con- duct of a wilful...

J. W. M. THOMPSON Enjoyable as it has been for many people, it's to be hoped that we shall never again witness anything precisely like this week's hoop-la over the handing-out...

A study in lost causes

PERSONAL COLUMN SIMON RAVEN So passed', in the passing of a day, Of mortal life the leafe, the bud, the flowre, Ne more cloth flourish after first decay That earst was sought...

DAVID WADE Sefior, have you seen my shadow lost at noon in Tarragona, slid away and not come back? I have asked these calm bystanders: Have you seen my purple shadow? And I...

AUBERON WAUGH Great writers are often irritated in their life- times by eager students, anxious to prove some bizarre intention on the author's part. Up to now this...

MARCUS CUNLIFFE The first white men to traverse the West were Spaniards. led north by Coronado in 1539. They had hoped to find civilisations as opulent as the Aztec. Instead...

RAYNER IIEPPENSTALL The Son of a Servant August Strindberg translated with an ,introduction and notes by Evert Sprinchorn (Cape 35s) Letters to the Intimate Theatre August...

JOHN ROWAN WILSON I suppose every ambitious young novelist nowadays must be wondering whether he wouldn't be well advised to abandon the weari- some search for new fictional...

• ANTHONY BURGESS My dear old Tony, Read any good books lately, as they say? I've been positively devouring old Chris's new novel, and I think you'd make like fury with the old...

MAURICE PRIOR I was rather taken with Madame Aubry Dines with Death by Hugh Travers (Elek 21s). Beautiful French female sleuth embarrassed at having to prove her lover innocent...

JOHN HOLLOWAY With the ploughland-wold alight a light for distance, a winter pallid sharpness, acid enough (being edged by the wind) to eat away clouds and eat away me—expose...

Picasso at the Tate ARTS

BRYAN ROBERTSON Before 217 identical Warhols of a Borden Cow, 0 feet by 4 feet, all arrive at the Tate as anottter munificent gesture requiring permanent instal- lation in a new...

ART PAUL GRINKE Some beautifully discreet redecoration has been going on in the Whitechapel Gallery to greet Tim Scott's exhibition of sculpture, 1961-67. Muslin walls provide...

CUSTOS A weak gilt-edged market was reassured by the May trade returns, imports being slightly down and the visible trade gap reduced from £41 to £25 million, but War Loan,...

Central bankers and ourselves MONEY

NICHOLAS DAVENPORT The Bank of International Settlements at Basle is the monthly meeting place of the central bankers who lend us all those millions. Natur- ally they keep a...

JOHN BULL Lord Hill has pulled the rug from underneath the television market. On Monday share prices of the companies concerned slumped by £111 million; - rww, a company valued...

CONSUMING INTEREST LESLIE ADRIAN The balloon will be going up at a lot of parties this autumn. With the police ready to pounce with their Alcotest 'breathalyser' kits, the...

Sir: Mr David Howell (9 June) advances a strange doctrine. Apparently it is all right for President de Gaulle to visit Moscow, South America, Montreal, or wherever, and still be...

Sir: Stuart Hood says (9 June) that the idea of scrapping scheduled programmes to deal with the Arab-Israeli crisis 'would not cross the minds of the present us/ contractors,...

After the - cease-fire Sir: The Israelis are not lady to

take the same flattering view of the part played by America and Britain during the last few weeks as the Arabs do. They can rightly say, 'Thank you for nothing.' It was the...

Sir: I feel that despite Mr John Ennals's spirited replies, the case which you originally stated under the above heading (26 May) still holds good. That the precipitate...

Sir: Mr Anwar El-Sadat, the Speaker of the VAR Parliament,

is also a writer of considerable power. His Revolt on the Nile (Wingate, 1957) remains a source book for students of the Egyptian Revolu- tion. Since 1957 he has frequently...

Sir: In your description of Mr Ivor Powell as 'cultural adviser in the Egyptian government ser- vice' (9 June) I can testify that you write in error. It is true that Mr Powell...

Sir: The reply to Mr Norman St John-Stevas, MP, and Miss Elspeth Rhys-Williams (Letters, 9 June) is as follows: I. The Abortion Law Reform Association received in 1965/66...

Sir: The Barnsbury Association were delighted with the article by Mr Patrick nutber entitled 'Barnsbury again' (26 May). At the present moment we are still waiting to hear from...

Sir: I read the article by Mr Tibor Szamuely ('Saga o Forsaitakh,' 2 June) with great interest. as I have just returned from a visit to Moscow —the main object of which was to...

Sir: The Maud Report unhappily begs the question of what has brought about the disenchantment of the public with its local government. While it deals mainly with suggestions for...

The battle of Stansted

Sir: I was most interested in your article on the projected Stansted airport (9 June) and your reference to the unanimity of the press about this scheme—damnable if it weren't...

Sir: Brian Alderson is right to draw attention to Britain's 'ailing bookshops,' to the prevalence of more profitable sales lines in many of these, mid to the lack of such...

JOHN WELLS When the smoke of the press conferences on the Middle Eastern war has finally cleared, the deafening glug-glug of the whisky bottles in the newsroom and the erratic...